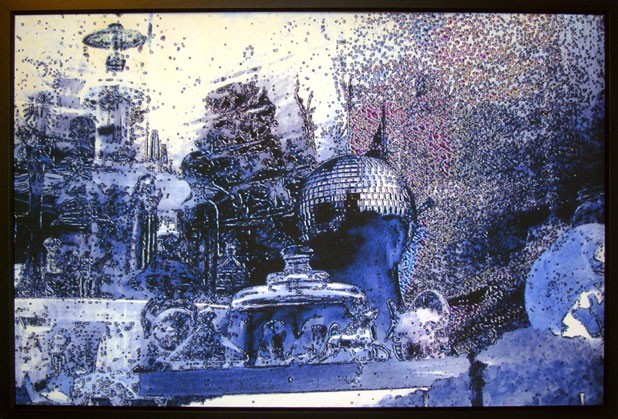 Rick Hayes paraphrases Charles Dickens for the title of his exhibition "The Best of Times, The Worst of Times." Dickens' brilliant opening line from A Tale of Two Cities is the first link in a chain of dichotomies describing the precariously imbalanced worlds of 18th-century France and England. Hayes' solo exhibition of computer-manipulated digital photos at the SEABA office gallery is a gathering of images on two themes that evoke an early 21st-century America seemingly on the verge of chaos. One of the themes involves an ongoing project called "The Crystal City," while the other unfolds in 18 images organized into two nine-paned diamond configurations. The latter reference "a world of smoke and machines without human beings," according to a curatorial statement.

"The Crystal City" is a sprawling project assembled from found-glass items Hayes has been constructing at his home for several years. His obsession, like that of a model railroader, is in constant flux and represents "an unending war between chance and entropy," he writes. The SEABA show's selection of altered images of Hayes' glass megalopolis is called "Apparition." The most dramatic image is the 24-by-36-inch digital print "Main Towers." It's like a crowded Times Square of indigo pixels and densely packed shadows. A large crystal sphere segmented by reflections inhabits the middle ground of the phantasmagorical Manhattan.

Another piece in "Apparition" is the 12-by-16-inch print of a squad of plastic soldiers scattered across an eerie white landscape. Hayes deepened the picture plane by making the figures more indistinct in the distance, and activated the image using sloping dark angles along the corners of the picture. All of his images are formally astute, and his compositions are rugged and keenly organized.

Opposite the "Apparitions" half of the show are the diamond groupings of nine pictures each. The curator's statement describes them as based on skyscrapers and as an homage to Goya's "Disasters of War" cycle of prints. These presumably represent "The Worst of Times" epoch noted in the show's title - and, in yet another referential layer, bear some relationship to 9/11. Hayes' conceptual narrative is ultimately rather esoteric, but the images he's created are compelling - regardless of whether anyone else understands the ideas that inspired them or determined the layout of the show.

An aggregation of snapshot-sized pictures is entitled "Genealogy." Among them are shots of glass vessels, a glass head entitled "New Woman: Last of the Matriarchs," and the copy of a picture of a woman giving birth to a glass sphere, entitled "Origin Obscured by the Object of its Own Design." Hayes' colors are muted, as he seems more entranced by starkly contrasted values than florid hues. Colors such as the blurry turquoise in "Night and the City" are seen in fleeting flashes rather than saturated fields.

A nearly 7-foot-high diamond of nine 16-by-20-inch prints looms ominously at one end of the gallery. The digital photos of geometric monoprints are somber and simplified. They are flat, yet striated with fine visual textures suggesting forms in a state of decay. Individual titles within the grouping include "The Triumph of Death," "The Last Missile" and "Sign of the Times." The piece entitled "Kronos" is named after the lord of the Titans in Greek mythology, who was overthrown by Zeus. Again, Hayes clearly has something very specific in mind with this tall diamond, beyond its graphic interest, but he doesn't disclose what it is.

Hayes' choice not to make things crystal clear is probably wise. Many of the images seem like postcards from a strange world too complex to be comprehended or fully described. The zeitgeist conjured in the artist's current exhibit is something too big to fit readily into a modest gallery.