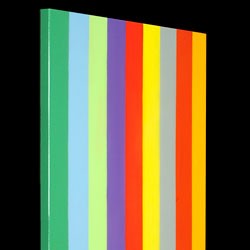 When Mia Feroleto opened Green + Blue Gallery on Stowe’s Mountain Road last fall, it was with the fanfare of intrigue and great promise. Not only was she planning to exhibit national and Vermont artists in a variety of contemporary styles; Feroleto also proposed an ambitious plan to bring urban artists north à la the Fresh Air Fund. That is, to find studio spaces in private homes in which participating artists could work for a brief sojourn, giving their host patron a piece of art as payment.

Then the gallery suddenly shut down in December, when the landlord decided to sell the building.

The good news is, Feroleto has found new quarters for her gallery on South Main Street. Green + Blue welcomed visitors to the space last Friday with an opening for painters Philip Inwood, from Britain, and Montréaler Heidi Spector, as well as Brooklyn-based photographer Julia Baum. And this time, Feroleto’s landlord is Gristmill Builders, who renovated the Greek Revival building before she moved in. If that name sounds familiar, you might be a fan of HGTV’s Dream House — Gristmill oversaw construction of the highly publicized 2011 version in Stowe. Feroleto says the company also did the lavish woodwork for the Spruce Peak Resort Performing Arts Center.

Coincidentally, Feroleto is also the new development director for that arts center, which opened in December. “We’re planning a number of things that will include both the center and my gallery,” she says, rattling off some big-name visual and performing artists who cannot yet be revealed. One name she’s willing to put out there: Mad Hot Ballroom. Color yourself curious.

And that Adopt an Artist dream? Feroleto says it’s on for Stowe this summer — and may be going international. “I’m trademarking it,” she says of the program, noting a possible connection with an extant European cultural-exchange network.