On the road with Terry Chance 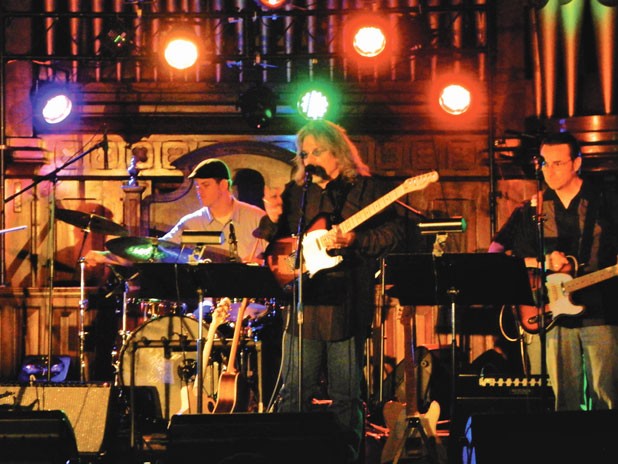 Terry Chance tells a lot of stories. But then, he has a lot of good stories to tell.

For starters, Chance, 55, who will play with his band the Mavericks on Friday, June 17, at the FlynnSpace in Burlington, has been touring as a country sideman and singer since he was barely out of middle school. His indoctrination into the genre came from an unusual place: across his backyard fence.

Chance was born in west Texas but grew up in Moore, Okla., in the late 1960s. His neighbor was a friendly, golden-voiced country crooner named Conway Twitty.

The singer took an interest in Chance when he, as he puts it, began “running around” with Twitty’s daughter, Joni. Chance dated her off and on for the next 14 years.

“Puppy love, you know,” he says with an easy chuckle. “The next thing you know, I was hanging out at his house all the time, playing guitars in the back,” he continues, a light, west-Texas drawl placing heavy emphasis on the first syllable of the word, “gui-tars.”

Sowing the seeds of what would become a lifelong friendship, Twitty taught Chance how to play all of his songs and sing harmony parts. Right around the time Twitty’s “Hello Darlin’” reached the top of the charts in 1970, Chance was accompanying the singer all over the U.S.

“The only things on my mind at the time were Joni and football,” he says of those early travels with Twitty. “But he kind of thought of me as his son. And I always thought of him as my second dad.”

Through his travels, Chance was able to meet and eventually perform with a cast of legends who could fill an entire wing of the Country Music Hall of Fame: Loretta Lynn, Johnny Cash, Merle Haggard, George Jones and Hank Williams Jr., among others.

“We toured a lot with Merle and Loretta,” says Chance, adding that Haggard was, at least in his younger days, every bit the hellion the outlaw country star has been made out to be. Sadly, he says those stories are off the record.

Chance regularly filled in for Haggard and Lynn’s bands when they needed a substitute player and he wasn’t touring with Twitty. That exposure led to gigs with other stars. “One thing leads to another and then Johnny Cash comes to town and says, ‘Terry, can you fill in for me tonight?’” he says.

Upon graduating high school, Chance enlisted in the Army. When his stint was up, he returned to playing music and was signed to a gospel label, Associated Records. On the road one night, Chance met a lip-curlin’, hip-swingin’ singer by the name of Elvis Presley.

“Elvis really helped me with my gospel music,” he says. That’s a good story too.

“I went to Graceland and popped in on him one day,” Chance recalls. That day, Presley was rehearsing with his own gospel group, the Jordanaires, with whom Chance would later sing himself. During a break in rehearsal, Chance approached the King.

“You and I have a lot in common,” Presley told him. “We both started singing in church.” Chance grew up singing and playing in a Pentecostal church in Moore.

“You know in your gut, when you start singing a gospel song and it starts to move you and impact you as much as it does the audience?” Presley continued. “That’s the key. If you sing a song and you’re reaching down and don’t feel it, you don’t need to be doing it.”

Chance took that decree to heart.

“From that point on, every song that I looked at or thought about, if I didn’t believe what I was singing about, I didn’t sing it,” he says. “Because sometimes that song doesn’t complement you, and sometimes you don’t complement that song.”

Given that he had a front-row seat during one of the genre’s defining eras, it’s natural to wonder how Chance feels about the current state of country music, and singers such as Taylor Swift and Keith Urban, who are more pop stars than rogues or troubadours. To answer, he sets up another story.

One day, 1970s country star Larry Gatlin’s young son him asked why country singers of the era weren’t doing songs the way his father and brothers had. Or, to borrow a line from Waylon Jennings, “Are you sure Hank done it this way?”

“Wait just a minute,” replied Gatlin. “You’ve gotta understand something. We did what we needed to do. That was our time. And now they’re doing what they need to do during this time.”

So, does Chance enjoy this latest evolution of country music?

“Am I crazy about it? I’m sure not,” he says. “I’m 55. I still embrace the classics. But Toby Keith, Reba McEntire, Vince Gill … these are all Oklahoma people that I knew when they first started. Times change.”

Indeed they do. But some things are simply timeless.

Conway Twitty died in 1993 after suffering a stomach aneurysm onstage in Branson, Mo. To most fans, Twitty was one of the genre’s brightest stars. To Chance, his legacy is something more.

Just prior to his death, Twitty had plans to push Chance with a new band, which he had dubbed Terry Chance and the Mavericks. When he died, those plans fell through. Chance walked away from music and went back to school, earning a PhD in fine arts. When he was ready to return to music, Dr. Chance knew what to call his new band.

“When I started this group, I wanted to start with the name he came up with,” says Chance. “My hero was my dad. But if I had a second hero, it was Conway. He was a gentleman.”

Terry Chance and the Mavericks play the FlynnSpace in Burlington on Friday, June 17, 8 p.m. $28. flynntix.org