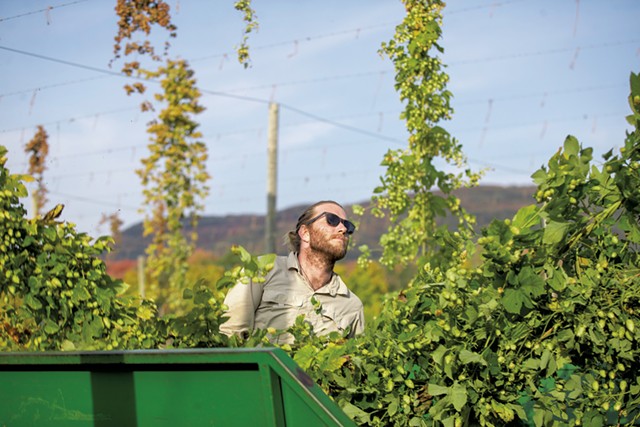 Update, March 16, 2021: Two additional breweries have joined the project since this story was first published.

Vermonters love locally brewed beer. But what do they think of locally grown hops? Answering that question is one goal of the Vermont Hop Project, a collaborative brewing experiment that launches this week, spearheaded by Champlain Valley Hops. (It's unrelated to the Vermont Hops Project run by University of Vermont Extension.)

Located in Starksboro, the state's largest hops farm, cofounded by Peter Briggs and Julian Post in 2018, picked and processed 23,000 pounds of hops during its second harvest in fall 2020. Now it's teaming up with breweries around the state to see how those hops taste in a finished beer and get conversations bubbling about using Vermont-grown hops in the industry.

"There's only so much you can learn about the aroma and flavor of hops without actually brewing with them," said Max Licker, Champlain Valley Hops' sales manager.

Roy Desrochers, sensory practice leader at UVM Extension's Northwest Crops and Soils Program, agrees. "The information we gather in the field ... gives us hints. But those flavors and aromas may not survive the brewing process," he explained. High levels of heat, interactions with other ingredients, and flavor compounds formed during the fermentation process all affect how the hops taste in the final, drinkable product.

"This project is exciting because it begins to tell us how our predictions turn out in the beer and which hops end up with a flavor that consumers are going to love," Desrochers said. "We don't have a lot of that data yet."

The first beers brewed for the project are ready to sample now. Zero Gravity's Local Local IPA, brewed with Crystal hops, is on draft at the brewery's Burlington taproom and around the state. Black Flannel will release its SHERPA (Single Hop Experimental Research Pale Ale) Crystal and SHERPA Magnum in cans and on draft at the Essex brewery on Thursday, March 11. The remaining releases will be staggered through the end of May, for a total of roughly 30 beers.

While Desrochers will analyze samples of the beers, subjective feedback is key to the project. The Vermont Hop Project will collect that from brewers and beer drinkers via a survey on the aromas and flavors they detect in a given beer.

For beer drinkers, "It's the ultimate tasting, being able to really understand these varieties," Licker said.

For the industry, it's an opportunity to explore how Vermont-grown hops compare with those from larger, more established hop-growing regions.

"The greatest thing — the grand slam, the holy grail — would be if we can find things that are unique about local hops that resonate with Vermont beer drinkers," Desrochers said. "I think we have a good chance of that."

The original print version of this article was headlined "High Hops"