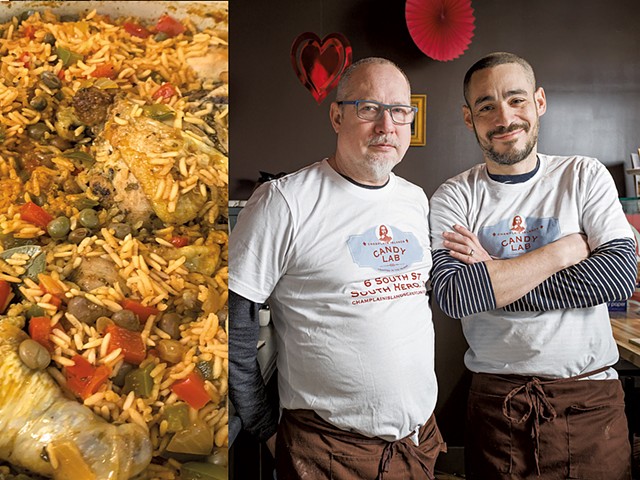 Albert Reyes-McCarver and Michael McCarver-Reyes, the married couple behind candy and coffee shop Champlain Islands Candy Lab, have added Lola's Latin Kitchen to their food enterprises at 6 South Street in South Hero. They named the new business after Lola Rodríguez de Tío in honor of her advocacy for Puerto Rican independence from Spain starting in the late 1800s.

Located in front of the Candy Lab, Lola's will operate out of a food trailer that the couple purchased from the Accidental Farmer Café, which relocated last year from Allenholm Farm to 6 South Street before closing for good.

While the trailer is under renovation, the pair is serving up a sampling of their pan-Latin menu on Sundays on top of their regular weekly sweet and savory crêpes. After Easter Sunday (when the Candy Lab will be closed), Lola's will be open both weekend days until Memorial Day, when hours will expand.

Having observed a lack of similar culinary options in the area, Reyes-McCarver drew inspiration from his heritage. "I'm pan-Latin myself," he said, noting that his ancestry is Puerto Rican, Colombian, Venezuelan and Dominican.

The dishes on Lola's menu will range from Argentinean empanadas to Mexican-style tacos, tamales and enchiladas. Items might be "intermixed" across cultures, McCarver-Reyes said.

Enchiladas, for example, might come with a side of Puerto Rican yellow rice, which contains onions, bell peppers and garlic with cumin, oregano, thyme and annatto for color. It recalls the rice Reyes-McCarver's paternal grandmother made. "That's my childhood," he said.

The original print version of this article was headlined "Latin Hero"