Champlain Fleet Club Offers a 'Loan, Not Own' Model for Boating 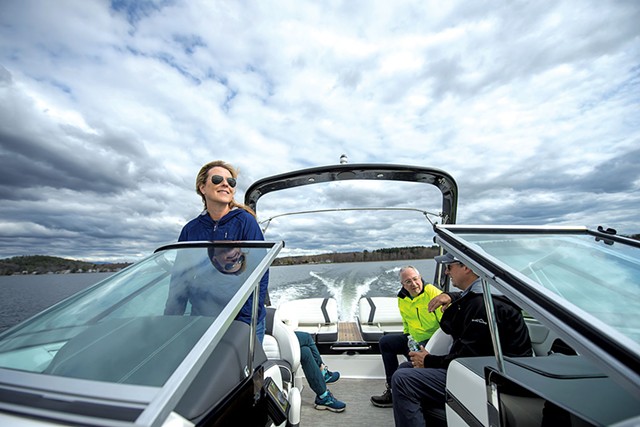 I must go down to the Lake again, to the mooring I had to buy

And all I ask of a boat leaking cash is help me remember: Why?

The sky was grayish-pink, with late afternoon sun dappling the clouds. Malletts Bay lay flat and silvery, a fast track. "How about some drug-smuggler speed?" I urged Champlain Fleet Club co-owner Tricia Scott, who was piloting the Regal 2300 Bowrider. She obliged by opening up the throttle, and the boat leapt from the water like a salmon fighting upstream. The wind threw haymakers.

And then the red U.S. Coast Guard boat hailed us.

The Coasties drew alongside, checked boat documents, life jackets, fire extinguishers and safety equipment — all was shipshape. The Champlain Fleet Club is well-known on the lake, and our random safety stop was largely due to the paucity of boats out in the first week of May. After some friendly banter, we were off again — though not, as Scott wisely elected, like a boat out of hell.

A few years back, Phil and Tricia Scott — he a corporate marketing executive, she with an accounting background — conceived a plan to serve the boating public that didn't want to own the vessels: a kind of floating Zipcar.

"We knew the concept," said Phil, having belonged to such a club when they lived in Florida. Vermonters played outdoors, they reasoned, but a relatively short season of warm weather challenges the notion of buying a boat. "So, we took the plunge," he said.

As the Champlain Fleet Club enters its fourth season, the couple's deep dive appears to have paid off.

"It is not cheap, but it's a lot cheaper than having to buy a boat." Elaine Keane tweet this

A "subscription" model appeals to would-be boaters who want to be out on the water, not underwater, weighed down with ownership costs. As summer approaches, many Vermonters shift their recreational focus from the Green Mountains to the blue-black of Lake Champlain. The sixth Great Lake, as it was briefly designated during the Clinton administration, is a ship magnet.

More than one-quarter of the state's 645,000 residents live in the Champlain Valley. There are 836 recreational boats registered to Vermont owners, according to a recent census by the website BoatInfoWorld, and many more from nearby states and Canada that ply the lake's 435 square miles.

The Scotts launched the CFC in 2019 with four boats and 18 members and saw business boom that year and in 2020 — not in spite of the pandemic, but because of it.

"The borders closed, Vermonters took staycations and liked that they could go out on the lake with their families and be safe and socially distant," Tricia said.

Members pay a one-time initiation fee of $3,900 — roughly the high end of what a slip costs per year, Phil explained — and then $250 to $355 per month, depending on the number of reservations. The CFC insures the boats, cleans and maintains them, and provides safety equipment, toys, tubes, water skis, wakeboards and tow ropes.

Members undergo about four hours of training. Then "they just turn the key and go," said Phil.

The real key, however, is availability. To ensure that supply satisfies demand, the Scotts try to keep a ratio of about eight members per boat. If membership outstrips that ratio, said Phil, "we buy another boat." They've also licensed reservation software from a club in western New York that creates a standby system in the event of a cancellation or no-show.

The subscription scheme has flourished in many locales. The Starbucks of this concept is the Freedom Boat Club, a national chain with 71 corporate locations and 270 franchisees. Founded in 1989 in Sarasota, Fla., Freedom has grown by targeting boating-rich environments — southwest Florida alone has more than 20 clubs — and blowing up traditional demographics. One-third of its members are new to boating, and 35 percent are women, said Scott Ward, vice president of corporate territories, in an interview with Seven Days.

The first rule of Fleet Club is know your market. Vermonters who live on or near the water, or who have the financial resources to support a boating habit, are not likely club members. 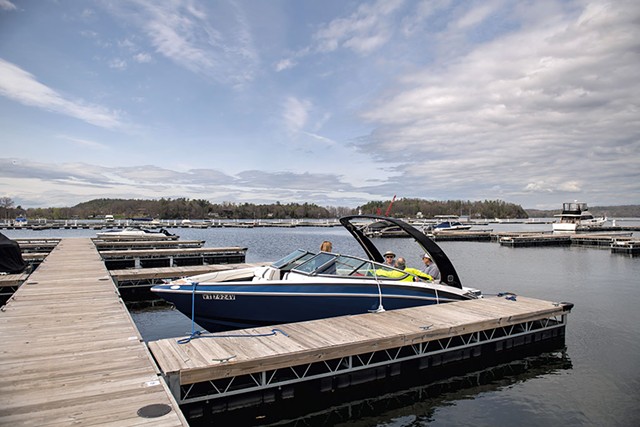 John O'Neill, who spends summers at his lakeside cottage in North Hero and is not a club member, said, "I like the idea that I can walk out onto my dock and take the pontoon boat out anytime I want." O'Neill, who runs a video production company, said he's owned four boats and admitted "they can break your heart — and your bank account."

Chris Norris does not live near the water, nor did he have a slip or mooring. For five years, he and his family would trailer their boat from their Huntington home to Charlotte, a 30-minute trek on a good day.

"There's a lot of prep work when you have your own boat," Norris said. "If the weather changes, all that prep can be for naught. We'd be lucky to get out a dozen times in a good year."

In 2019, faced with some pricey maintenance issues, Norris and his wife, Alice, began looking for alternatives, which led them to the CFC as it was just getting under way. Once they satisfied themselves that getting a boat at busy times was not a problem, they signed up. Said Norris: "We got out 30 times last year."

First-time boaters praised the training they got and the availability of assistance if something goes awry. "If the engine sounds weird or something, [the Scotts] are just a phone call away," said Burlington spa owner Cynthea Hausman.

South Burlington residents Elaine Keane and her husband, Barry Clogan, were scuba divers before their kids came along, but they had never been boating. They decided that a membership club was a good way to test boating's appeal for them.

"It is not cheap, but it's a lot cheaper than having to buy a boat, run it and deal with all of that," Keane said with her native Irish lilt. "So I feel like it makes that accessible to so many people that wouldn't have that opportunity."

Nick Kyratzis was 30, single, living in Essex Junction, looking for something new and admittedly naïve about boating in 2019. "I just thought I'd go on Craigslist and buy a boat," said Kyratzis, who works for Vermont Information Processing in Colchester. Owning was a stretch, he discovered, so he explored the rental option and that led him to the CFC. After doing a careful cost comparison, the CFC delivered the most boat for the buck.

"It was really a no-brainer," said Kyratzis, who has been the club's top boatsman the last two years, getting out 60 times a season.

She expertly steered us back to the dock, the better sailor of the couple, with Phil's own admission. As would any club member, we got out of the boat and walked away, no boat chores to perform and looking forward to turning the key again.

Ironically, the enjoyment and satisfaction with the loan arrangement has caused some members to wonder: What if?

"I didn't expect to like it as much as I do," Keane said, giggling. "And that's a problem — because I would actually love to buy a boat!"