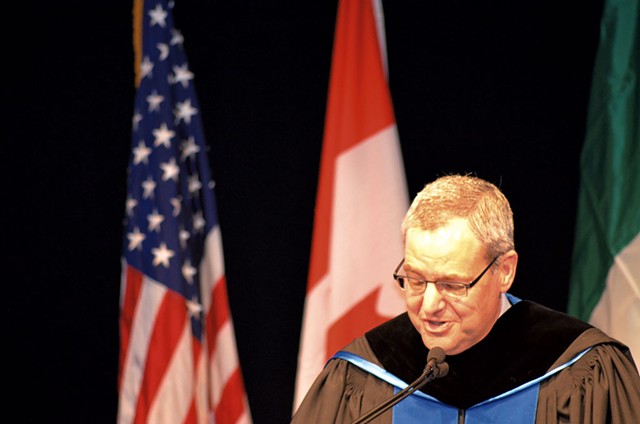 The last Champlain College president to step down, David Finney, gave the Burlington school plenty of notice in 2013 — 14 months, in fact. Likewise, University of Vermont president Thomas Sullivan announced his retirement a year before it will become effective next week.

So the June 12 announcement by Finney's successor, Champlain College president Donald Laackman, that he would leave the post barely two weeks later, on the 28th, was striking.

Trustees and Laurie Quinn, who will serve as interim president, insist the quick exit is not a sign that anything is amiss, even though Laackman's departure after five years on the job comes at a time when Vermont's lucrative higher education sector is in tumult. Three private Vermont colleges shut down after graduation last month, and several others are struggling with deficits and declining enrollment.

"We're in great shape," said Quinn, who, as interim, will become the college's first woman president. She steps into the job from the No. 2 slot at Champlain: provost and senior vice president of academic affairs.

But the numbers aren't all good. Champlain's full-time undergraduate fall enrollment has dropped 6 percent over the last two years, to 2,129 in 2018. Partly in response to that, the college initiated an early retirement program this year. Sixteen staffers and seven faculty members took the deal.

Laackman declined to be interviewed, but his team says he's been a skilled manager during challenging times.

Quinn and trustees note that Laackman logged budget surpluses, not deficits. And while undergrad enrollment has slipped, it has not plunged. Considering the demographic decline of high school graduates in Vermont and the Northeast, that's an impressive achievement, they say. In Vermont, the number of high school grads declined 6.7 percent over the last two years, according to the New England Board of Higher Education.

In a bid to reach beyond the market for traditional students, Laackman boosted online enrollment significantly, to 2,348 students last fall, more than triple the number in fall of 2013.

Every higher education institution in the country is at risk in the current market, said trustee Neale Lunderville, chair of the search committee for a new president and the former general manager of the Burlington Electric Department. "That said, we are better placed than a lot of schools," he said. He praised Laackman as an expert financial manager and said trustees are sad to see him go.

Trustee Rick Davis, a philanthropist and Vermont real estate developer, echoed that sentiment and said the board did not pressure Laackman to leave. He praised Laackman as the "right guy at the right time," for Champlain but acknowledged that the president's job can be tough. "You can't please 100 percent of the people 100 percent of the time," Davis said, adding that he was surprised to learn from board president Scott Carpenter in late May that Laackman was resigning. Carpenter wrote in an email that Laackman leaves the college "on strong footings."

There are reasons that successful presidents often give notice of their departures a year in advance, according to Larry Ladd, a Boston-based college consultant with the firm Grant Thornton. Such an announcement projects stability, provides time to celebrate the outgoing president and allows for continued decision making, since interims often aren't given much authority, Ladd said.

He's not familiar with the situation at Champlain. But reducing staff through means such as early retirement incentives is actually a good sign, because administrations should address potential budget problems before they get into deficit mode, he said.

It's unclear whether Laackman is leaving before his contract is up. Quinn declined to answer that question or say whether Laackman will receive any severance. His total compensation was $551,511 for the fiscal year ending in June 2017, according to the most recent publicly available Internal Revenue Service Form 990 tax filings for the nonprofit college.

Those same documents show that while Laackman has steered clear of the deficits plaguing the Vermont schools that recently closed — Green Mountain College, the College of St. Joseph and Southern Vermont College — the school has faced tighter margins under his leadership.

Back in 2013 when Finney was at the helm, Champlain reported a net income of $15.2 million. By 2016, that figure had dropped to $5.8 million, IRS filings show. Meanwhile, according to numbers provided to Seven Days by the college, debt increased between 2015 and 2019 from $50.4 million to $71.4 million. A good part of that borrowing was to cover the 2016 construction of an apartment-style dorm in downtown Burlington that Finney, not Laackman, initiated.

Formerly a two-year business school, Champlain has evolved into an institution that offers career-oriented bachelor's and graduate degrees, as well as programs in fields such as cybersecurity and video game design. Its growing campus of carefully restored historic buildings and shiny new construction balances gravitas and modern gleam.

Champlain's long emphasis on job training will help it succeed in the more competitive higher ed marketplace, Quinn predicted, adding: "We were a career school before it became cool to be a career school."

The college must be "proactive," and the recent retirement offers were one of the levers to help balance the budget, she added. Quinn declined to provide details about the financial packages that were offered but said all the departures were voluntary. The result leaves the college with 410 employees.

She said Laackman is leaving because he is ready but declined to provide more details about the timing.

As the president cleans out his desk, employees are also saying goodbye to colleagues who took the early retirement offers. It's difficult to see valued and experienced colleagues leave, but some were planning to retire in the next few years anyway, said Mike Kelly, an associate professor of rhetoric who served as faculty senate president from 2013 to 2016.

He pegged Laackman as a great fiscal manager who negotiated long-term contracts with faculty that helped foster stability at a school where there is no academic tenure system. "Actually, the last five years have been better for faculty than they were the five years before that," Kelly said.

He added: "I think that Don [Laackman] did what his strengths gave him the most capability to do, and that is [to] sort of right-size the institution from a fiscal perspective. Once the work was done, what to do next was a little bit murkier, and he decided to go at that point."

Laackman is not Vermont's only departing college president. In addition to Sullivan, Bennington College president Mariko Silver is leaving July 1 to lead the Henry Luce Foundation in New York. On May 31, Thomas Greene, president of the Vermont College of Fine Arts in Montpelier, announced he was going on sabbatical effective July 1 and would officially step down as president in June 2020.

Laackman's wife, Allyson, a former Obama White House staffer, has announced that she will be leaving her job as executive director of the Burlington Housing Authority. There's no hard date for her departure, and she expects to work — even remotely — until her replacement is found, she said.

The couple moved to Burlington from the Chicago area, where Donald Laackman had served as president of Harold Washington College. Allyson Laackman declined to discuss their next move or the reasons for her husband's resignation in any detail. "You know, I'm really not interested in sharing too much of the personal stuff," she said.

"His decision to step down now was his decision, and I'm completely proud of everything he's accomplished."