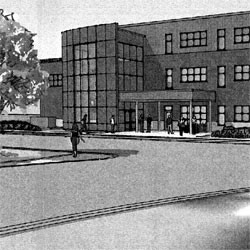 The paint is barely dry on Champlain College’s $12 million renovation and expansion of Perry Hall, and the popular liberal arts school is already looking to expand into the city’s South End.

Its next site: a three-story, 37,500-square-foot building on Lakeside Avenue under construction by local developer Robert “Bobby” Miller and his company R.E.M. Development.

The building will accommodate 50 employees currently scattered across the campus and the city. College administrators also plan to make it the core site for Champlain’s information technology infrastructure and home to its popular Emergent Media Center (EMC), currently located in Winooski’s Champlain Mill.

But this month, before Champlain College can lease or purchase Miller’s building, it must get the go-ahead from the Burlington City Council. According to a 1994 memorandum of understanding (MOU) between the city and the college — in force until 2014 — the college can’t lease or buy property outside the core campus, central business district or so-called transition zones without explicit council approval.

Miller, college officials and members of the Kiss administration say they hope the council will approve the plan that David Provost, senior vice president for administration and finance, laid out in a memo to the Burlington City Council last month.

The 50 employees whose administrative offices would occupy the new building currently work in 12,000 square feet of leased office space at 212 Battery Street and a few on-campus offices, Provost informed the council. Workers from finance, marketing, continuing professional services, human resources and campus planning would be relocated to Lakeside Avenue.

Miller and his wife, Holly, are committed to Champlain’s ongoing success — they’ve literally helped build the college’s reputation. They have donated millions to Champlain College — enough to have the school’s state-of-the-art library named the Robert E. and Holly D. Miller Information Commons.

Along with work spaces and the EMC and IT center, the site will include 100 parking spaces for both on-site and off-site employees, as well as 155 long-term parking spaces for students. Students who park on Lakeside will be shuttled to campus, furthering the college’s goal of making its core campus “car free.”

The building will be metal and brick with windows “inspired by the rhythm of mill windows” to allow for lots of natural light, according to the project’s architectural narrative provided to councilors. Stair towers will be visible on the street side of the building and at its rear entrance. The rooftop will incorporate a solar array and an outdoor patio.

Miller said neighbors can expect it to be more picturesque than when it was a large, Casella-owned recycling and waste transfer station. Miller called the project one more step toward the South End’s transformation from an industrial and warehouse district to a business district centered on technology.

“The building itself continues the effort to show that this is not an old industrial neighborhood anymore,” said Miller. “It’s just one more step to help dress it up and make it more livable for the neighbors and for other businesses to move in.”

The Kiss administration has hopes that Champlain College’s presence in the neighborhood will make it easier for Pomerleau Real Estate to lease the building that currently houses General Dynamics. The weapons maker announced late last year that it plans to move to Williston by the end of 2010.

Pomerleau and city officials would like to lure tech companies into the former General Dynamics building, and Champlain’s nearby presence, along with fast-growing Dealer.com just up the street, could help their cause, said Larry Kupferman, director of the city’s Community and Economic Development Office. The city has been trying to bring the EMC back to Burlington, Kupferman added. He noted that the redevelopment will augment the city’s overall tax base through the college’s property taxes and user fees.

“From an economic development standpoint, we’re very excited about this project,” said Kupferman. He particularly likes the idea that tech-savvy students at the EMC might decide to keep their own startups in the area: “As people go through the EMC program, it will spin off businesses and other Internet-based companies and makes a nice package overall for the city.”