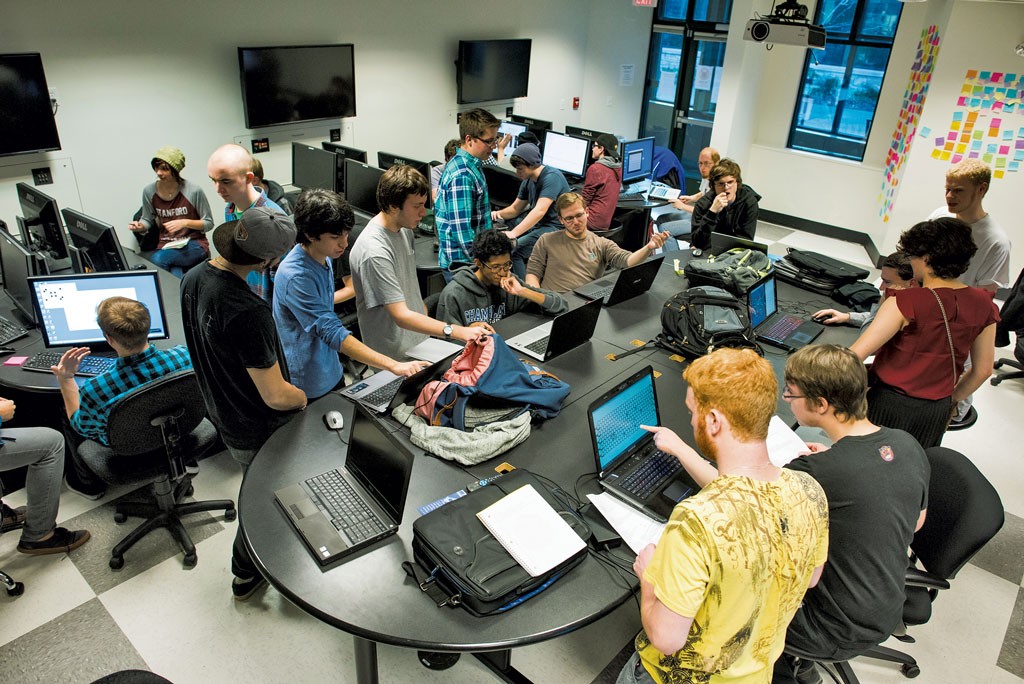 The 60 graduating seniors from the school's Game Studio weren't there just to show off their senior projects to friends and family. The games, which were the culmination of yearlong collaborative teamwork across four disciplines, were also meant to wow industry talent scouts.

And they did. Friday's eighth annual senior show was the first part of a two-day recruitment effort by industry reps visiting from 15 game studios from as close as Montpelier and as far as Bend, Ore. During the event, which showcased demonstration reels of the games as well as students' individual portfolio pieces, recruiters scribbled notes about what they liked and whose work impressed them. Later, recruiters provided Amanda Crispel, Champlain College's assistant dean for game development, with a list of students they wanted to interview the following day.

"It's a level of professionalism I've never seen before among students," said Chris Reese, a game developer with Sony Computer Entertainment America/Bend Studio in Oregon. Reese first came to Champlain's senior show last year "on a whim" after he met one of its students at a conference in San Francisco.

"We ended up hiring quite a few seniors last year, and they've worked out fantastically," Reese said. "They were able to come into the studio and start working from day one. Their skill level was excellent."

"The game industry is very competitive, but we're still doing quite well," Crispel said. On surveys of game-design grads from previous classes, she reported, 75 to 100 percent are currently working in fields related to their degree.

Ten years after Champlain College first launched the game-development degree program, it's evolved into four specialized degree tracks: game programming, game design, media management, and game art and animation. Now ranked among the top-20 game-design programs in the country by the Princeton Review, the Game Studio is attracting a caliber of applicants that surpasses those of just a few years ago.

"We now have students coming in who've already published games," Crispel said. "[Many] have programming backgrounds, and they've already been working in 3D. They know what they want and they're really intensively driven."

But, as Sony's Reese observed, Champlain's Game Studio reflects another aspect of the game-development industry: a dearth of gender diversity. This year's graduating class of game designers is only 12 percent female. Reese admitted it's been a struggle not just for his company — which has three female developers in a staff of 75 — but for the industry as a whole.

Champlain has launched a campaign to close that gender gap, and the effort may well affect future graduating classes.

"The game design and game programming [degree tracks] are still predominantly male, but game art and animation are now attracting a higher percentage of females," said Jo Ann Patel, assistant professor of communication and creative media, who teaches game art and animation. Over the past two years, Patel's incoming classes of game artists and animators have been about 50 percent female. That's a considerably higher proportion than in the industry as a whole, which, according to Crispel, is only about 15 percent female.

Both Patel and Crispel admit that Champlain still struggles to recruit women and minorities into the traditionally white-male-dominated specialties of game programming and game design. In those areas, only one in 10 Champlain students is female.

Few could argue that gender equity is long overdue in the $22 billion-a-year computer-game industry, especially in light of its rapidly changing demographics. As the Entertainment Software Association reported last year, 48 percent of all gamers are now female, with "women age 18 or older represent[ing] a significantly greater portion of the game-playing population (36 percent) than boys 18 or younger (17 percent)."

Despite such trends, sexist attitudes persist in the gaming world, as evidence by last year's "Gamergate" controversy, in which female game designers were subjected to sustained misogynist attacks and even threats of violence. Just last month, the Washington Post ran a blog post written by a 12-year-old mobile-game enthusiast, Madeline Messer, who asked, "Why don't the characters in my apps look like me?" The sixth grader looked at 50 of the top iPhone game apps and found that 90 percent of them offered boy characters for free, but only 15 percent did so for girl characters.

Such trends aren't lost on Champlain College underclassmen such as Emma Campbell, a 20-year-old sophomore from Franklin, Mass., who's studying game art and animation.

"It's always a struggle — misogyny, women and gaming," Campbell said. "Anyone who's been involved in games and is female knows that, and will continue to deal with that. But the more voices we have in the industry, that rise in the industry, the better things will get."