Chamber Player or Rocker, a Vermont Violinist Brings It Home 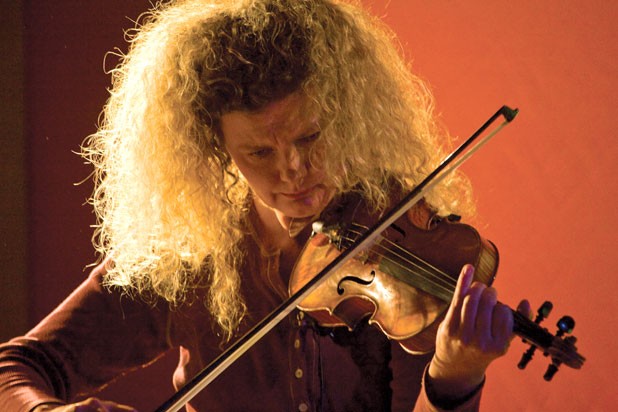 Mary Rowell has always straddled two musical worlds: the classical and the contemporary. The Vermont-born violinist has performed to stadium crowds with the likes of Madonna and Sheryl Crow and regularly solos with the New York City Ballet. Yet she’s drawn back home each summer to play with the Craftsbury Chamber Players. You can feel her energy when she’s onstage; even as part of a string quartet masterfully executing Beethoven, there’s something about Rowell that stands out. It’s not just her towering height and head full of massive, spring-loaded curls, though they certainly help. It’s also her unpretentious and unabashed love for the music.

Rowell will perform Bartók, Gershwin, Fauré and Brahms with the Players a few more times this summer at the group’s weekly concerts. Then she’ll return to performing and recording with Ethel, a “postclassical” string quartet, and serving as concertmaster of the Palm Beach Pops and the Radio City Music Hall Orchestras.

Rowell, 52, has a long and special relationship with the CCP. She grew up on a farm in Craftsbury Common and attended her first CCP children’s concert when she was about 7. At first, her mother had to wrangle her into going. “I was a real outdoorsy kid, and it was a hot summer day, midafternoon,” Rowell recalls. But the music quickly won her over. “These were young, vivacious people, and they played really well … It was just really, really exciting.”

Rowell’s mother encouraged all her children to play musical instruments — Mary’s sister, Frances, plays cello with the CCP. When it came to culture, Rowell says, “Growing up in Craftsbury, you weren’t going to get it unless you made it.” So Rowell learned the piano, sang in a choir and took violin lessons with one of the chamber players’ founders, Ann Rylands.

“As a perk, I got to drive the farm tractor up to her house,” Rowell says. That’s where she made a connection with the violin that would stay with her forever.

Still, even after attending the Juilliard School, Rowell wanted to be a rocker. She scraped together a band and began playing in clubs. With her violin.

“I would go out and play rock clubs at midnight; then I would be up at rehearsals at 9 in the morning for the American Symphony [Orchestra],” she says. “I had years of life like that. I loved the energy of playing in a rock band — everyone’s standing on their feet and rocking out.”

Then she’d play Mozart for 25 people in a concert hall. Rowell could feel the listeners were into it, but they were definitely more reserved, she says. In an effort to break down musical barriers, she started inviting friends from her rock-club world to chamber-music concerts, and classical buffs to her late-night gigs. Rowell’s genre melding culminated a dozen years ago in Ethel, which she founded with three other classically trained musicians. The string quartet vowed to behave like a band, playing primarily music composed after 1995 and infusing it with the kind of energy and style found in pop.

Still, Rowell’s roots in the Craftsbury Chamber Players remain central to her musical philosophy. “I look at everything from a chamber-music perspective because it’s so personal and so vibrant and intimate,” she says. “I look at a rock band as a form of a chamber-music group, a modern group. It’s all the same; it’s all about connecting with people and communicating on stage.”