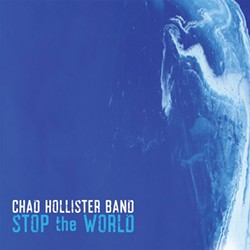 Chad Hollister seems like a really nice guy. If there's one thematic element that connects his ever-growing catalog — which dates back to his 1998 mononymous debut, Chad — it's positivity. Even his more downcast songs are uplifting. To build a career on sunshine and rainbows is surely commendable, especially when there's so much ugliness and grief in the world. I just wished that I liked his music more.

The term "adult contemporary" is frequently applied to Hollister. But can we really keep "contemporary" in the descriptor if his sound is trapped in the '90s? That's what I kept thinking while listening to his fifth studio album, Stop the World. The saccharine schlock-rock contained within expertly re-creates the uninspiring sounds of Counting Crows, the Goo Goo Dolls, Blues Traveler — you get the idea. It's generic, relies heavily on clichés and may cause the listener to slip into a diabetic coma.

What the record does have going for it is the production. Its vibrant horn and string arrangements are detailed and compelling. The guitar tones are perfectly calibrated, Hollister's vocals are strong and pristine, and an overall sheen suggests quality craftsmanship in the studio. These attributes distract from the banal songwriting.

You know when you're watching a horror movie and thinking, Don't go in there, don't go in there — but then the characters always do? Stop the World contains more than a few such moments. For instance: the title track. I hoped the title phrase would not be followed by "cuz I wanna get off." (Don't go in there!) But it is — and the full statement is repeated throughout.

Hollister brazenly adds scat singing into the mix on the rocksteady-tinged "B.O.D.I." with mixed results. While he does string together nonsense syllables with a silver tongue, it seems out of place on what might be the best song on the record.

The reggae vibe briefly returns in the climax to "Mama Knows," a soul-rock crusher that delineates a standard set of values and life lessons. ("Eat your broccoli!")

"Breathe" is a sickly sweet song of reassurance along the lines of the Goo Goo Dolls' "Your Name," and Hollister's raspy affectation is cloying.

The Chad Hollister Band are probably best suited to listeners who prefer the middle of the FM dial. But Hollister's affability could strike a chord with anyone who hews to the bright side — or needs to.

Stop the World is available on iTunes. Catch Chad Hollister and his Large Band on Thursday, July 20, at Battery Park in Burlington, and on Wednesday, July 26, at the Martha Pellerin & Andy Shapiro Memorial Bandstand in Middlesex.