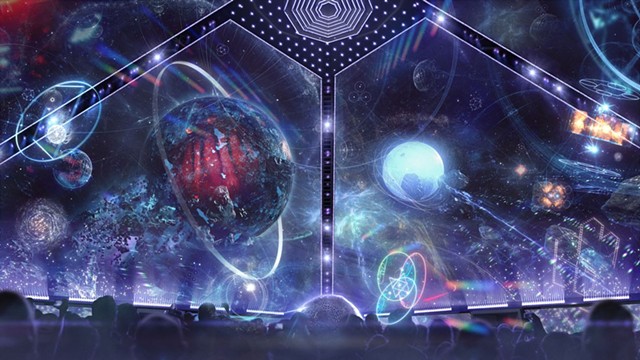 Venture across the border to Montréal this summer, and you'll likely notice an anachronistic 81-foot pyramid on a pier of the city's Old Port. Step inside and you'll discover a 360-degree theater, the site of a new immersive, multimedia show called "Through the Echoes." The project — dubbed PY1, which stands for Pyramid 1 — is the brainchild of Cirque du Soleil cofounder Guy Laliberté, in collaboration with his company, Lune Rouge Entertainment. The hour-long show uses video footage, music, lights, lasers, special effects and the voice of late British philosopher Alan Watts to take spectators on a virtual journey through time and space — from the Big Bang to the future — and to provoke weighty questions like "What does it mean to be human?" Appropriate for ages 8 and up, there are no assigned seats; visitors are encouraged to lie down in the space. For the 18+ set, PY1 also offers late-night shows Friday through Sunday, featuring seven different "worlds" and a clubby atmosphere. Catch the show until the end of September, when it heads to the warmer climes of Miami.

PY1 is located at the Clock Tower Pier in Montréal's Old Port. A four-person family package to "Through the Echoes" costs C$129. Shows run multiple times a day. PY1 is wheelchair accessible. Find more information and buy tickets at py1.co.