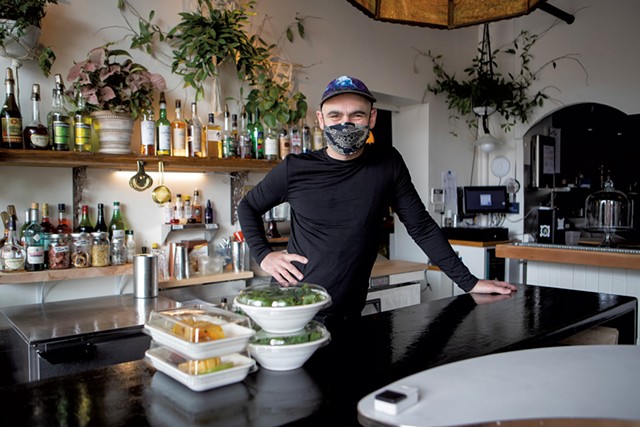 When I was growing up, my mother often punctuated her statements with the French phrase c'est ça. The literal translation is "it's that," meaning "yes, exactly, that's it" — though it can just as easily be a sarcastic "yeah, right." She said it as a sort of verbal shrug — it is what it is — usually as she pulled a burnt batch of cookies out of the oven.

When I heard the new restaurant taking over the ¡Duino! (Duende) space in Burlington would be called C'est Ça, my mind went straight to my mom's interpretation.

It's hard not to see a resigned shrug in ¡Duino! (Duende) owner Lee Anderson's decision to temporarily rename his street-food spot ¿Do We Know? during the pandemic. In July, he explained the rebranding as a "nod to all that is unknown about the current situation." Soon after, the restaurant closed, to be reborn as C'est Ça with chef Justin Wright at the helm.

On a rainy Tuesday — the first in ages — I placed an online order for pickup. C'est Ça also offers delivery, but I needed to get out of the house.

Dodging raindrops, I dashed up to the pickup counter at the restaurant's entrance, and the first thing I noticed was its makeover. Where ¡Duino! (Duende) was dark enough to feel like it radiated a magnetic force sucking you in off the street, C'est Ça is bright and open, inviting you in. Or it would be, if we weren't stuck in a global pandemic.

C'est Ça operates entirely to-go, by design. When he announced the new restaurant this summer, Anderson told Seven Days he wouldn't be comfortable hosting indoor dining until the summer of 2021. (His companion business Cherry, a new café, retail shop and artist market next door to C'est Ça in the former Light Club Lamp Shop, is open for walk-in customers.)

For chef Wright, the takeout-only aspect was a draw. He moved back to Vermont with his wife this summer after several years in California, where he was most recently chef de cuisine at Oakland restaurant Sister.

"Everything else I looked at was like, 'Oh, we need to pivot. We need to pivot,'" Wright said last week of his job search. At C'est Ça, he continued, "We're not just pivoting. We're starting something brand-new."

Wright was able to design the menu with takeout in mind, rather than adapt existing dishes to survive the demands of to-go boxes.

"When I was back in California, I started planning dishes like our gem-wedge salad," Wright said. In Vermont, he knew he could expect to find little gem lettuces from Pitchfork Farm and Knee Deep Farm, places he remembered from his time working at both branches of Hen of the Wood before he moved to the West Coast.

"If I just cut [the lettuce] in half and serve it as a wedge — put some dressing on it, put a bunch of crunchy stuff on it — it will travel well. It won't wilt. It's not like a salad green that's going to die in a heartbeat," he said.

Wright described C'est Ça as a "casual French eatery that has some Eastern touches." Many of the preparations and techniques are noticeably French, even if the ingredients aren't. A selection of sandwiches ($12 each) are served on French-style rolls made in-house. The Francophone pan bagnat, for instance, is a smoked-bluefish sandwich with arugula, niçoise olives, sweet peppers and a jammy egg.

"The moniker C'est Ça gives us the flexibility to be like, 'Oh, that's it,'" Wright said. "It really leaves it wide open, and there's room for interpretation as long as it's kind of French." 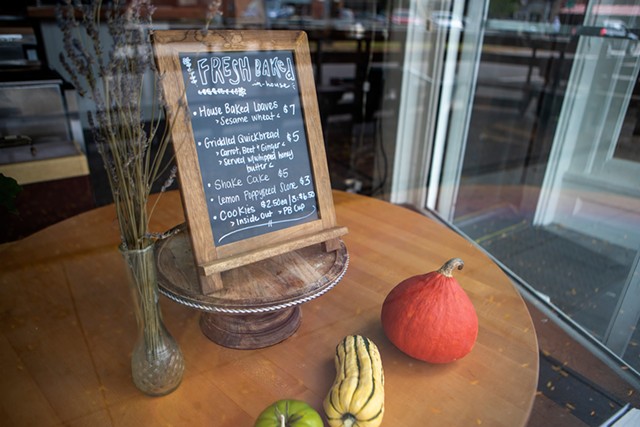 When I try a restaurant for the first time, I like to graze, ordering as many dishes as I reasonably can to see what it's all about. At C'est Ça, grazing meant ordering most of the Snacks & Salads portion of the vegetable-forward menu.

The Farmer's Cukes ($6), potato salad ($6), carrot salad ($8) and fried green tomatoes ($8) were full of the "Eastern touches" Wright mentioned. The marinated cucumbers were garnished with seaweed, Sichuan chile crisp, toasted sesame seeds, peanuts and fresh herbs; the dish had both a cool crunch and a building heat that kept drawing me in for another bite. The potato salad appeared classically mayo-dressed at first glance, but this was Japanese Kewpie mayo, made with egg yolks, vinegar and MSG — a welcome update.

The carrot salad looked like it came straight from a French deli case — where Wright drew the dish's inspiration, he later told me. But daikon, preserved lemon, pickled jalapeño and sumac gave it an Asian twist and a sour brightness that paired well with the richer fried green tomatoes.

"I love when you go to French-style delis or bakeries and they have cold vegetable preparations," Wright said. "There's always these sort of staples, like julienne carrots with a little bit of vinegar. Our version is shredded-up local vegetables. It can be dressed and sit in a to-go box, and if it's eaten an hour later, it's not going to be a soggy, watery mess of vegetables."

It didn't take me an hour to get home, but each of the vegetable dishes did hold its character during my drive. The fried green tomatoes and okonomiyaki ($10) — a savory Japanese pancake griddled with kimchi and garnished with bonito flakes — were expectedly warm rather than screaming hot, but they were texturally sound when I unpacked them.

The packaging itself was a joy to open. I'm a big fan of clear takeout boxes that allow me to see what I'm getting before I fiddle with the lid; it builds suspense, like glimpsing the dish as a server carries it across the dining room. Of all the to-go experiences I've had since March, opening these boxes and spreading the dishes out on the table felt the most akin to restaurant dining.

The drinks list at C'est Ça helped bring the bistro vibe home, too. Developed by Jenn Kufa, it was full of cocktails I wanted to order (I'm looking at you, Ferrari Spritz and Octopus's Garden), beer I love to drink, and bottles of wine and sake that I complain about not being able to find at most restaurants.

The wine skews natural, including bottles from the Czech Republic, Sicily, France and Vermont. I nearly ordered a bottle of the skin-contact Tectonic from Shelburne's Vineyard's Iapetus label before remembering I already had one at home. Instead, I went with a lambrusco ($26) — largely because one of the tasting notes was "fuzzy," which felt right for a rainy night.

I also ordered a three-pack of Underberg ($7.50), the aromatic German digestif, because I was so happy to see it on the menu. (My dining companions were new to Underberg's bitter delights and were less enthused.)

To top things off, I chose a selection of skewers from the Off the Grill section of the menu: yuzu shrimp, miso tofu and chicken yakitori ($12 for three).

Wright admitted that the skewers are best eaten quickly, straight off the yakitori grill. I enjoyed them but made a mental note to order an extra set to eat in the car next time. After all, stick food is ideal for driving.

"When you think about where dishes like that originated, it's these casual little bars throughout Japan, these izakayas," Wright said. "It's just, like, a hangout spot where we would go get pitchers of beer and chicken wings. But they eat stuff grilled on charcoal, and they eat it right away."

Wright spends a lot of time considering how to strike a balance between dishes that work for takeout and others that might work when — someday, hopefully — C'est Ça starts seating diners inside. Once people have gotten to know the restaurant, revamping the menu for on-site dining could be the same level of pivot that other restaurants were forced to make during the early days of the pandemic.

"At a certain point, you just have to think about food like you always do," Wright said. "I didn't foresee doing this ever in my career, you know? I just want to make stuff that tastes good."