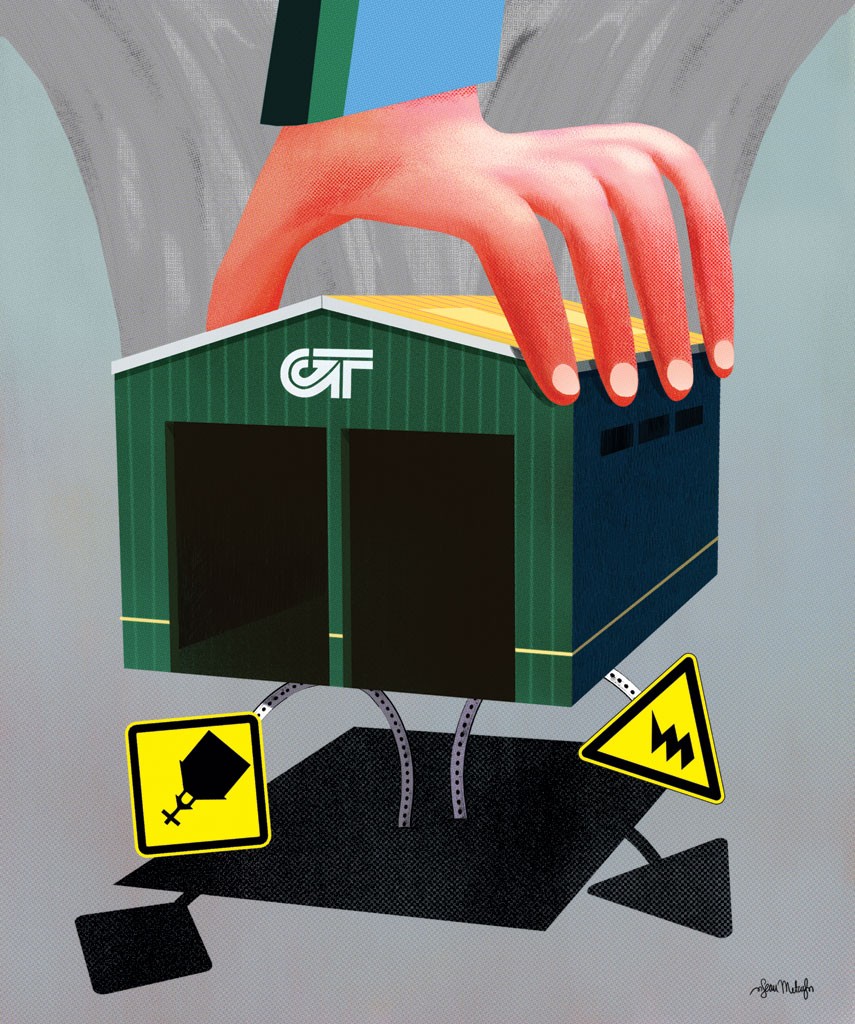 Twice in recent months, the Chittenden County Transportation Authority has been thwarted in its attempts to buy property in Burlington that it claims is crucial to its long-term growth. An electrical contracting business that abuts CCTA's headquarters in the South End has refused to sell. And while the downtown Cathedral of the Immaculate Conception was amenable to a deal, the agency has had problems securing approval from church officials authorized to sell land where CCTA wants to build a new "transit station."

So the nonprofit bus service, whose public image was battered during a two-week driver strike last winter, has quietly resorted to a controversial tactic: It has taken the entities to court, invoking eminent domain to try to force them to sell.

"We believe that this is for a very good reason," CCTA spokeswoman Meredith Birkett said. "It's for the future of CCTA and the future of the community. The board discussed it and thought a lot about how people would be concerned. We've been very thoughtful about that."

CCTA's tougher fight is with its next-door neighbor on Industrial Parkway, which runs parallel to Pine Street. The agency wants to take a building and three acres owned by Ryan Brothers Electric, a family electrical-contracting business. CCTA, which provides 9,700 rides a day, says it needs more space to store its fleet of 70 buses, some of which now have to be parked outside. CCTA also needs more repair bays. Its current five are at capacity, making it difficult to keep up with maintenance.

In 2012, Michael Ryan listed his building and two of the three acres on which it sits for $1.6 million. When he didn't find a buyer at that price, he pulled the parcel off the market. Recent negotiations with CCTA, which aims to acquire all of his real-estate holdings at that location, have come to a standstill.

In court papers, Ryan said there have been no talks between the two parties since the CCTA board voted in November to pursue condemnation of his entire property. He has asked a Chittenden Superior Court judge to dismiss CCTA's eminent domain petition, saying he can't afford to relocate for what the agency is offering and would prefer to keep his business in its present location. The case could take several months to resolve.

"My client is very upset and disappointed," Ryan's attorney, Liam Murphy, told Seven Days. "He would really like to stay where he is. What CCTA is willing to pay for his property and what he can replace it for are two very different things."

Eminent domain is essentially a two-step process once it gets to court. A judge must determine that the government is justified in taking the property — that it's necessary. If it is, either a judge or jury determines a just compensation amount to be paid in the event the parties fail to agree on the value of the transaction.

Eminent domain is most commonly used by state or municipal organizations or utilities. CCTA, which is technically a municipality chartered by the legislature to provide transit in Chittenden County, also has the power.

CCTA used eminent domain once before. In the early 1990s, the agency decided that it had grown too big for its original headquarters, which were located in the current Ryan Electric building. Envisioning a new HQ, it came up with a plan to build on some nearby land that was owned by a local family.

CCTA initially sought to use the same law that allows local governments to take property, but the Vermont Supreme Court rejected that logic, saying the transit authority was not eligible under that statute.

So CCTA changed tactics, citing a state law that allows transportation agencies to seize property. The little-used statute was passed primarily so that the state could take farmland to build the interstate system decades ago.

"The statute was clearly designed by the Agency of Transportation in condemning property for highway construction with financing from the State of Vermont," CCTA's attorney acknowledged in a court filing on an unrelated case.

Regardless, CCTA won its argument, took over the neighboring land and built its current headquarters there.

A few years later, in the mid-1990s, CCTA sold its old headquarters — to Michael Ryan. In court filings, CCTA is trying to use that history to its advantage, arguing that the building that CCTA once occupied is uniquely equipped to handle its buses.

A couple of months after filing for eminent domain to obtain Ryan's property, CCTA used the same approach to take a strip of land owned by the Cathedral of the Immaculate Conception.

CCTA plans to build a new central bus stop, complete with waiting platforms and new shelters, on the northernmost block of St. Paul Street in downtown Burlington. The city council has greenlighted it, and CCTA is currently working through issues surrounding easements with Burlington City Hall.

But to build the transit center, CCTA concluded it needed to obtain an 8-by-400-foot piece of parish land.

The parties agreed earlier this year to a "friendly taking" for roughly $280,000, Birkett said, but there was a snag: The Roman Catholic Diocese of Burlington is currently operating without a bishop, who must sign off on all real estate sales.

So CCTA went to court to enforce the deal, which was recently finalized. The diocese and its attorney did not respond to messages seeking comment.

CCTA isn't the only entity in Vermont resorting to eminent domain to carry out its projects. Vermont Gas will likely file eminent domain petitions this week against Addison County landowners who have not signed agreements allowing the utility to build a natural gas pipeline through their property, spokesman Steve Wark said.

The utility has offered to pay for mediators to settle disagreements with each landowner along the proposed pipeline route. Last week, Wark estimated that more than 100 landowners have reached agreements to give Vermont Gas rights to their land; roughly 40 landowners were in "productive discussions" with the utility and likely to settle out of court; 20 more landowners could be subject to an eminent domain fight.

Gov. Peter Shumlin recently sent a letter to three lawmakers that expressed concern about Vermont Gas using eminent domain and suggested the utility should try to avoid the process, according to a report from VTDigger.

"We have made significant progress. We realize that in some cases we will not be able to," Wark said. "We want to be good neighbors. We want to make this work ... I'd much rather pay a landowner than a lawyer."

As of press time, attorneys were the only folks getting paid in CCTA's eminent domain battle on Industrial Parkway. Who's writing the check? Federal taxpayers.

In 2004, Sen. Patrick Leahy secured a $2.4 million federal earmark from the Federal Transit Administration for Burlington to build a transit center in the city's South End. But the project soon hit legal and permitting challenges, and was eventually scrapped. That left one big problem.

"The City was under pressure to expend the earmark," according to a May report from CCTA staff to the CCTA board.

City officials decided to give the Federal Transit Administration's money to CCTA so they wouldn't have to give it back to the feds. Soon after the $2.4 million was deposited, CCTA opened talks with Ryan.

"They're just trying to use the money because they have it, and Michael [Ryan] happens to be the easiest target — he's next door," Murphy said.

The last time CCTA issued a formal study of its growth plans was in 2010. In that report, the expansion of bus-maintenance facilities received only a mention, and did not merit a place on the report's Action Agenda.

"CCTA's current operations and maintenance facility ... is in very good condition and was recently expanded to allow for indoor parking of more buses, but still requires parking of some transit vehicles outside and has little room for additional drivers to park their own vehicles," the report states. "As service expands, CCTA should explore and create additional indoor bus parking and additional car parking at or adjacent to this facility."

However, Birkett said that the agency has long identified expanding its bus-maintenance space as a priority. "We didn't rank projects in any order, because we don't usually know where the funding will be available to us," Birkett said. "We want to leave that document flexible, so we can take advantage of the opportunities when they come."