Gordon Bock said he complained at the Statehouse during the last legislative session about the way state law so frequently refers to people with criminal records as "offenders."

The word labels people "who have spent a lifetime doing possibly good things and pigeonholes them by what might be the worst 15 minutes in their life," Bock said he told an administrative official.

"You want to fix that?" the official asked him, according to Bock. "Why don't you run for the legislature?"

Bock laughed at the time. But a few months later, he joined a group of advocates who are first-time candidates for seats in the Vermont House of Representatives.

While they claim to be campaigning on a number of issues, each of these aspiring politicians acknowledges being motivated by a particular cause, from criminal justice reform to gun rights.

It's not unprecedented for advocates to try their hands at public service. But this election season features an unusual number of high-profile true believers making the switch, in hopes of advancing their agendas from the inside.

'Nothing Wrong' With Guns 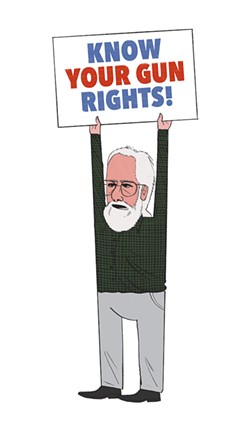 Eddie Cutler is a longtime member of Perkinsville's Precision Valley Fish & Game Association. Years ago, he offered to monitor legislative activity on gun and hunting issues for the club. That involved reading Statehouse news reports and delivering quick briefings at the club's monthly meetings.

But as time passed, Cutler came to believe more should be done. A champion target shooter, the 64-year-old East Dorset native said he believed that gun owners were unfairly stigmatized every time a high-profile act of violence made the news.

"I never mentioned that I shot guns. I came to realize, I've been handling firearms since I was 8 or 9 and I've never done any violence — what was I ashamed of?" said Cutler, who now lives in Westminster. "I was really proud of my accomplishments. [I wanted to] say, 'Look, there's nothing wrong with this stuff.'"

In 1996, Cutler and some friends gathered in his living room and founded Gun Owners of Vermont. It now claims 4,000 members and is "dedicated to a no-compromise position against gun control," according to the group's website. Cutler began making regular treks to Montpelier to attend hearings and jawbone with lawmakers.

This past session, Gun Owners of Vermont and other organizations successfully lobbied against state bills that would have required background checks for all firearms purchases, banned the use of lead ammunition in hunting and allowed Burlington to implement charter changes restricting firearms use. The group also helped defeat a bill that would have prevented the sale of ivory in Vermont because it adorns some high-end vintage handguns and rifles.

But Cutler said he has grown increasingly frustrated by the limits placed on him as a lobbyist. Hearings on the ivory bill were particularly galling, he said, because he had no way of contesting other speakers' remarks.

"There were a lot of misstatements, and I couldn't come out and say, 'You're wrong,'" Cutler said. "But if I'm on the other side of the table, I can get more into that."

So a few weeks after the session ended, Cutler did something that surprised many who know him. He declared his candidacy.

It's hard, he said, "to walk up to somebody and say, 'Hi, I'm Eddie Cutler, and I'm running for office, and what are your concerns?'" He added: "When I deal with my people, I know where they're at. These are strangers, and it's hard to come up with some kind of conversation."

'I Know How to Lose'

For two decades, Mary Beerworth has been the state's leading pro-life advocate, engaging in high-profile fights over abortion rights and medication-assisted suicide.

In liberal Vermont, that hasn't amounted to a winning streak for the 60-year-old lobbyist.

"I know we're not there to make a significant amount of legislative progress," Beerworth said. "I never was in the Statehouse thinking I was going to get a piece of legislation all the way through to the governor's desk. I was there to uphold the sanctity of human life."

A Jericho native, Beerworth raised three sons and a daughter. In 1996, she was hired as the executive director of the Vermont Right to Life Committee.

She was one of the primary opponents to the state's 2013 bill that legalized medication-assisted suicide — proponents of which called it the "death with dignity" law. Its passage still haunts Beerworth.

"It was horrifying to me that they could put out such a lousy piece of legislation and have the biggest risk to life of anything I've ever seen before," she said.

Beerworth moved from Troy to Fairfax nine years ago. This spring, she and a few allies decided it was time for a conservative to oppose their incumbent state Rep. Barbara Murphy (I-Fairfax). Beerworth stepped in.

She has some unique qualifications. Beerworth has advised scores of right-to-life legislators and candidates. More importantly, she's comfortable with a political hazard that scares off many potential office seekers.

"I know how to lose," Beerworth said. "I get back up and don't go down for the count. I might lose, but I'm still right — that's how I feel about it. I put a smile on my face."

If she prevails, Beerworth said, she might keep her role with the Right to Life Committee. And if she fails, she plans to return to lobbying. 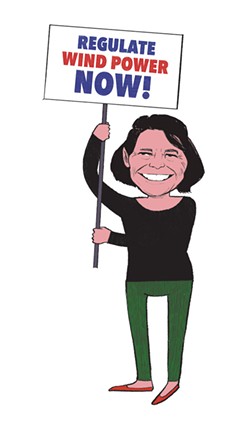 Penny Dubie may be a newcomer to advocacy, but she is no stranger to the Statehouse. The wife of former lieutenant governor Brian Dubie, who lost the 2010 governor's race to Peter Shumlin, has become a vocal critic of industrial wind power. Specifically, she opposes the proposed construction of Swanton Wind. The project's seven 499-foot turbines, the largest in Vermont, would be visible from her Fairfield home.

An Underhill native, Dubie avoided the public eye during her husband's political career and devoted much of her energy to raising their four children, now adults. But she's joined a growing chorus of Vermonters against renewable energy projects large and small. In the past year, she became one of Vermont's most vigorous wind-power critics, rallying neighbors and testifying at the Statehouse.

"There's a lot of people out there who are very excited about this issue," said Dubie, 59. "When I was at the legislature, I was really surprised by the amount of influence industry lobbyists had over the lawmakers. There's a general theme that towns couldn't be trusted to do energy planning. We need respectful partnership between town governments and the state."

Dubie, whose husband once supported wind turbines, deflects criticism that she is a not-in-my-backyard critic.

"At first, Brian and I said, 'We support wind; not sure we're going to get involved,'" Dubie said. "Then we started meeting with people in Georgia and Lowell and heard their story. It's not about looking at turbines. The real impact is having a turbine near your home. People can't enjoy gardens. Their sleep is impacted; their property is impacted."

Describing herself as "shy," Dubie acknowledged that she has benefited from her family's political connections, which have given the first-time candidate a boost. She said she is enjoying the opportunity to make a name for herself.

"It's definitely out of my comfort zone," Dubie said, "but it's important for all of us to step up when we see something that needs to be fixed."

Bock describes the prison population as one of the "most easily forgotten, oppressed and downtrodden elements of our society." And he knows of what he speaks. Bock spent 13 months in jail on two convictions, in 1992 and 2003, for shooting a former girlfriend's son and later assaulting his wife, whom he has since remarried.

Upon release, Bock founded nonprofit CURE Vermont to support inmates and their families. That role often landed him in legislative committee rooms opposing policies backed by law enforcement officials or the Department of Corrections. Bock has been a leading advocate for providing inmates with better care and reducing the prison population, and ending the state's contract with a private prison company.

The decision to run for office, he said, was a moral imperative.

"You can do what I and other advocates do and spend a lot of time walking around the Statehouse and complain a lot and fight ideas that would be bad for your constituency," said Bock, who is running in his Washington County district. "You can more or less be on the sidelines of the game or stop the complaining and get some skin in the game."

For Bock, it's a matter of switching teams. If the 61-year-old ex-con wins, he might be the only state rep with as much experience breaking laws as making them.

In the end, corrections worked for Bock. "The way we should look at ourselves and others in our community is by whether the person learned from their mistakes and whether they changed their lives," he said. "I know I did learn from my mistakes, and I did change my life and turned it into a calling."