Catching Up with Dave Chappelle … from Barre 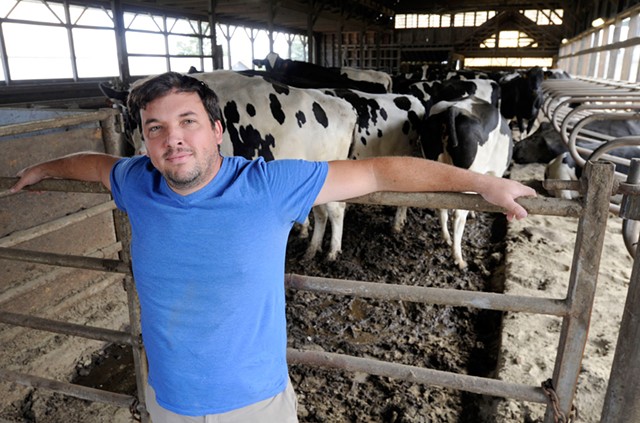 When the news broke this summer that comedian Dave Chappelle would be performing in Burlington in the fall, the first thing we did here at Seven Days was freak out. The second thing we did was reach out to Chappelle's management to inquire about an interview. Sadly, we were told, Chappelle wasn't doing press for his October 5 shows at Flynn MainStage, presumably because he didn't need to. The 7 p.m. show sold out so quickly that the Flynn added a second one at 9:30 p.m. — and those tickets went just as fast.

It's hardly a surprise that Chappelle's Burlington show is one of the hottest of the year in Vermont. He has become a comedy unicorn — a near-mythic figure whose infrequent public sightings have been the stuff of legend since he abruptly left his hit sketch-comedy series "Chappelle's Show" in 2005. In the years since, he essentially receded from the public eye.

Most famously, Chappelle went on a soul-searching trip to South Africa. As for comedy, he would appear only sporadically, and usually unannounced, to do standup at small clubs around the country — most often in Ohio, where he now lives. That makes Chappelle's current tour kind of a big deal. And it doesn't require media help to sell out theaters, much to the chagrin of a certain local altweekly.

Still, we couldn't stop salivating at the thought of interviewing one of the funniest and most mysterious comedians of this generation. So we did the next best thing: We interviewed Dave Chappelle from ... ahem ... Barre.

This Chappelle is a native of Williamstown and a University of Vermont grad. He works in various capacities as a labor consultant and migrant-worker liaison with dairy farms around the state. He's married and a father of two. He is not a comedian, though he's familiar with the Dave Chappelle who is.

The soon to be 37-year-old Chappelle of Barre was a student at UVM when "Chappelle's Show" was at the height of its popularity, in the early 2000s. At first, he says, the shared name was a fun coincidence.

"Back then the show was in full force," Chappelle of Barre explains in a recent phone interview. "So every time I went to the bars and pulled out my ID, someone made a comment about it."

But the jokes, like grossly over-quoted lines from a 10-year-old TV show, eventually grew stale. "It does get old," he says with a sigh. "Like, every time I call Verizon technical support or something."

While nobody with working eyesight would ever confuse the two Chappelles, there has been at least one legit case of mistaken identity. In college, Barre's Chappelle said he received a couple of fan letters from grade schoolers in New Jersey asking for his autograph.

"In hindsight, I really wish I'd had a head shot taken and signed it," he says.

His best story comes from a college orientation meeting. Chappelle and a handful of other students were sitting in a circle taking turns introducing themselves. When it was finally his turn, he said his name and the room erupted in predictable fits of disbelieving laughter. But there was still one student left to go.

"His name was Robin Williams," says Chappelle. "It even said so on his name tag. It was the weirdest coincidence I've ever had in my life."

SEVEN DAYS: So you went away for a while. How was it? Where did you go?

DAVE CHAPPELLE: Well, I actually went to Peru most recently. It was a short trip leading students from the University of Vermont's Community Development and Applied Economics Department. It was a great mix of work and sightseeing. We worked on a research project looking at local potato purchasing by Cuzco restaurants.

SD: There were rumors swirling after you left the show that you had kind of freaked out and had a breakdown. Was that true?

DC: I always stress out a bit before traveling, but a "breakdown" might be going a little too far. Did my wife say that?

SD: Many view you as the funniest man alive. How does that make you feel?

DC: Wow. What a compliment. People never actually say that to me, though. There is another guy out there with a similar name who is probably a little funnier.

SD: You're seen as an influential icon in your field. What is it like to have younger generations revere you like that?

DC: There are very few people out there in my line of work. When you say "younger generations," it is probably an exaggeration. I have one Guatemalan guy named Choko who just started working with me. He is, in fact, younger than me, though.

SD: Do you ever get tired of people yelling "Chappelle's Show" lines in your face?

DC: Picture this: I show my ID to pick up some will-call concert tickets and I get "I'm Rick James, bitch!" yelled at me and my wife. Or I check into a hotel and, after a "Chappelle's Show" quote from the desk clerk, I have to spend the rest of the night explaining what a black white supremacist is to my 8-year-old son. Total nightmare.

SD: In 2013, Charlie Sheen claimed he laughed so hard at an old "Chappelle's Show" episode that he ruptured his spleen. He was subsequently fired from "Two and a Half Men." Getting Charlie Sheen canned from a terrible sitcom has gotta be a career highlight for you, right?

DC: Charlie Sheen needed to be taken down. I am sorry it took so long for that to happen.

SD: What's your favorite thing to do on weed?

DC: I don't smoke weed these days. But if I did, I would probably smoke a big spliff and watch a few episodes of "Chappelle's Show." Funny stuff.

The original print version of this article was headlined "I'm Dave Chappelle, Bitch!"