Catching Up With “Charlie, Ernie and Lisa in the Morning” | Work | Seven Days | Vermont's Independent Voice

Catching Up With “Charlie, Ernie and Lisa in the Morning” 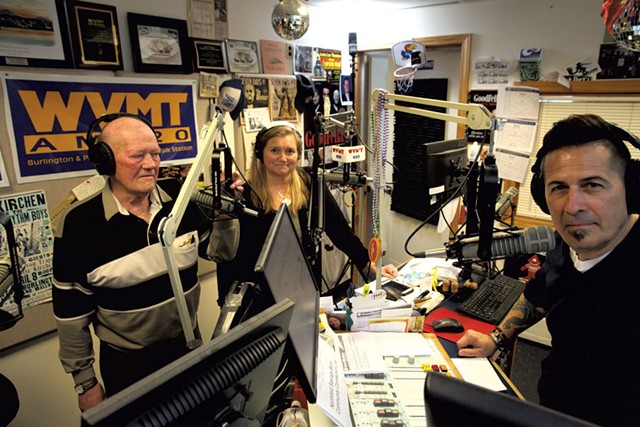 It's become tradition that guests of "Charlie + Ernie + Lisa in the Morning!" bring food to the hosts. For example, Burlington Mayor Miro Weinberger always comes with donuts when he stops by the News Talk 620 WVMT studio at the end of a dirt road in Colchester. Others have offered sandwiches, lobster and prime rib. One guest served up roast woodchuck.

But when Richard Simmons visited the studio some years ago — before his self-imposed exile from public life — the flamboyant celeb brought something different: sloppy, wet kisses.

"We were taking a picture in the booth, and so I whispered to [Simmons] to give Ernie a big kiss just before the shot," says host Charlie Papillo. Ernie is cohost Ernie Farrar, the 73-year-old "Dean of Vermont Broadcasting," who recently celebrated his 50th anniversary at the station. But Simmons had another idea.

"We took the shot and [Simmons] muckles on to me," Papillo, 61, recalls with a laugh.

"Thank goodness, greyhounds," Farrar injects with an eye roll. His voice sounds just as rich and raspy-smooth off air as it does on the popular morning talk show.

Papillo and Farrar teamed up in 1998 to start "Charlie & Ernie," which touches on everything from local and national politics to sports and food. Lisa Nagle, 54, joined 10 years later, adding not just comedic wit — and a penchant for celeb gossip — but a moderate liberal balance to the more conservative viewpoints of her cohosts.

The show attracts a wide range of Vermont guests, including politicians, musicians and journalists. Seven Days political columnist John Walters is on every Wednesday morning at 8:10 a.m. CEL has landed some big-name interviews, too, including singer Michael McDonald, comedian Bill Cosby (before the rape allegations) and the occasional randy celebrity fitness guru.

SEVEN DAYS: How much prep goes into each show?

CHARLIE PAPILLO: You're never not prepping. Especially now (holds up his smartphone), you're always connected. You've got to stay on top [of] what's happening and think about how it's going to affect our show tomorrow, what are we going to talk about, what are people interested in. You're constantly reading and watching.

ERNIE FARRAR: I don't do that. You've got to be smart for the smartphone and I'm not smart enough to have one of those. And I don't make the big bucks that these guys do, see?

SD: Lisa, your cohosts had been on the air together for several years before you joined the show. How did you handle the transition and build your own rapport with them?

But for me it was a dream. I was always really interested in [radio] but never had the training for it. I've learned a lot from both of them. Charlie is a great interviewer and is quick-witted. Ernie gets me my coffee every morning.

CP: Listeners are very protective of the show and sometimes don't like changes. So at first it was a little rough.

LN: It was. There was a woman who didn't like me and she would just trash me on Facebook, like, every day. I'd never experienced that before.

EF: Charlie and I had been together for years. It was the first civil union. But we had the chemistry. And when you add the third person, no matter who it is, there is a learning curve.

SD: Ernie, have you always had that great radio voice or did you have to work at it?

EF: No, I bought it at Fishman's on Church Street. I was at the hospital the other day and this woman said, "What a great voice. Gee, you oughta be in radio."

SD: You're on the air at six in the morning. Do you ever get used to getting up that early?

LN: I have two personalities: Night Girl and Morning Girl. And they do not like each other. But you get used to it a little bit. And weekends are so great. But I can't sleep past seven o'clock anymore.

CP: I can't sleep in anymore. It's also a killer because you want to end the night early — or you have to, anyway.

EF: I love mornings. It's nice and quiet. But when I started, I was only 20 years old. I didn't want mornings; I wanted to go out at night.

SD: Charlie and Ernie, politically you lean more conservative. And Lisa, you lean more liberal. How do you navigate that dynamic?

LN: We differ sometimes on things. But we also agree on a lot. Half of my friends are conservative. But that doesn't mean we can't be friends.

CP: That's what makes it interesting to listeners. It's a perfect formula. If it's just somebody preaching the same perspective, you're not hearing the other side. And that's boring. So we try to present both sides.

SD: How do you keep things civil on air?

CP: I'm very protective of our guests. Any time you have a politician on, they're opening themselves up to somebody calling in and ambushing them. If that happens I shut them down right away. Even if I don't like the person's politics, you don't get personal, you don't do name-calling or make accusations you can't back up. I think because of that, we've gotten respect from politicians from all parties.

SD: You do like to have fun with Bernie Sanders, though.

CP: We've gotten a lot of material from Bernie. He hasn't been on the show in about nine years. But, honestly, that's good. Because we got a shtick out of it: "How come he doesn't wanna come on the show?" So, we do make fun of him a lot, and I don't know if we could do that if he came on the show.

The original print version of this article was headlined "Power Trio"