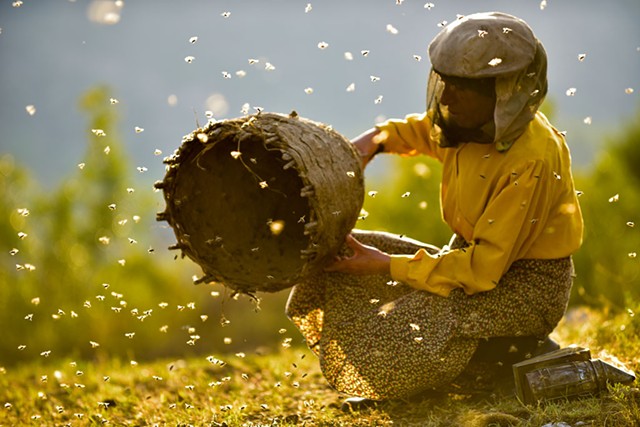 In seasons past, the Castleton International Film Festival has featured programs devoted entirely to French-language, Spanish-language and Israeli films. This year, the seventh edition of the free-to-the-public fest features movies from Kenya, North Macedonia, Senegal, Syria and China. The common denominator: Each of the five films, screened over two weeks, was directed or codirected by a woman.

"Historically, such a small percentage of films have been directed by women, because women have had so few opportunities to direct films and [have] seen so few role models directing films of their own gender," says Michael Talbott, who chairs the media and communication department at Castleton University.

"We even see that in our students," he continues. "Historically, in film programs and production programs, you see far more male students than female students. So we felt like it was important to highlight all the great films being made around the world by women."

Talbott curated the festival with Sam Davis-Boyd, an assistant professor of media and communication at Castleton. It kicks off on Tuesday, March 10, with Wanuri Kahiu's Rafiki, a star-crossed love story about two young Kenyan women whose taboo romance is thwarted by cultural pressures and familial objections. The film made headlines in 2018 when it was banned by the Kenyan Film Classification Board due to its "homosexual theme and clear intent to promote lesbianism in Kenya contrary to the law."

While the Kenyan High Court subsequently lifted the Rafiki ban for a week — making the film eligible for Academy Awards consideration — the controversy contributed to a broader cultural debate over LGBTQ rights in Kenya. Despite widespread protests, the high court upheld the criminalization of gay sex in May 2019.

The Oscar-nominated Macedonian documentary Honeyland, about a wild beekeeper's intimate devotion to her hives and her ailing octogenarian mother, screens on March 12. The film presents its subject's conflict with an overzealous neighboring beekeeper as a microcosm of the environmental impacts of the world's declining bee population.

On March 17, the fest offers Mati Diop's Atlantics, the first film directed by a black woman to be screened in competition at the Cannes Film Festival. Diop, the niece of lauded Senegalese director Djibril Diop Mambéty (Touki Bouki), made her acting debut in Claire Denis' 2008 father-daughter drama 35 Shots of Rum.

Atlantics, Diop's first directorial feature, combines gritty naturalism with supernatural ghost-story aesthetics in its tale of a 17-year-old in Dakar who pines for her working-class boyfriend lost at sea.

"I think it's such a timely story about migration and people who are struggling to find work, and the desperate situations they find themselves [in] or are willing to put themselves through — in order to make a living, in order to survive — and the toll that those sorts of choices can have on a community," Talbott says.

For Sama, which competed against Honeyland in the Best Documentary Feature category at last month's Oscars ceremony, comes next on March 19. Codirected by Syrian-born Waad Al-Kateab and British native Edward Watts, the film is a first-person account by Al-Kateab of her family's struggle to survive the horrors of the battle of Aleppo.

Talbott suggests that the 2016 controversy over then-Rutland mayor Chris Louras' scuttled plan to resettle 100 Syrian and Iraqi refugees in the city gives the screening added significance.

"I think it's really relevant here, because we did have three Syrian families resettled in Rutland, and we're potentially going to have more at some point," Talbott says. "I think one of the challenges for a lot of folks was really understanding who was on the other end of this word 'refugee' — what those people look like and who they were ... and I think this film, in a pretty devastating way, shows you what life is like for people in Syria in the past decade."

The festival concludes on a lighter note on March 24 with the mother-daughter comedy-drama Girls Always Happy, the first feature from Chinese director Yang Mingming. It's the most obscure film in the program — and the only one not available on major streaming services such as Netflix or Amazon Prime.

Talbott says that, even though a film like Atlantics is free for Netflix subscribers, the accessibility of titles for home viewing wasn't a consideration when curating the fest.

"I think the nature of our market, being here in Castleton ... I've discovered that if something's available for streaming, it doesn't really matter to our audience here," he says. "They come for the festival experience."

That experience includes introductions by Talbott and Davis-Boyd, who put the films and filmmakers' biographies in cultural context, and post-screening discussions. Talbott hopes this year's festival will give audiences the opportunity to watch and debate movies they're unaccustomed to seeing on the big screen.

"For the 125 years that films have been made, there's been so few opportunities for women to direct films, and that's meant that a lot of stories and perspectives and experiences haven't been shared with audiences," he says. "We hope that this is a stage where people can see five films and maybe start to understand those stories and perspectives and experiences more."