Cashing In: Who's Financing Vermont's 2016 Candidates? 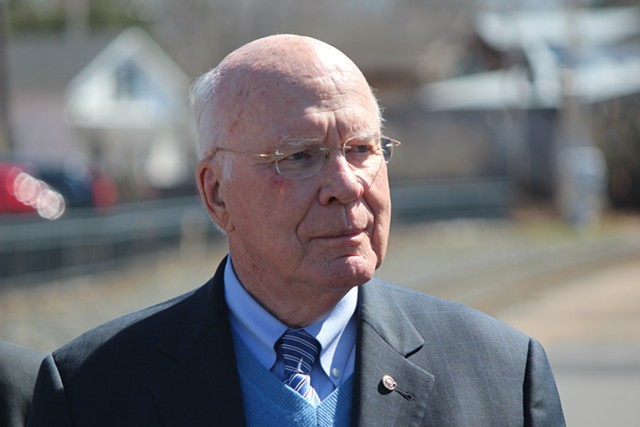 As he has throughout his four decades in Congress, Sen. Patrick Leahy (D-Vt.) returned to Vermont in February to deliver the goods. This time, it was a $15.8 million U.S. Defense Department contract to build a helicopter monitoring system at a factory in Vergennes.

The plant's owner, UTC Aerospace Systems, celebrated the news in a press release, noting that Leahy had for years used his powerful perch on a defense appropriations subcommittee to support the corporation.

"Sen. Leahy has been a consistent advocate for our company's people and its products," general manager Bettyann Lemire said.

The next month, parent company United Technologies returned the favor. Its political action committee contributed $2,500 to Leahy's reelection campaign. In June, it gave another $2,000 — bringing its six-year total to $9,500.

As he runs for an eighth term, Leahy has been calling in such favors left and right. His most recent campaign finance report, filed late last week, features dozens of lobbyists and PACs representing banking, technology, telecommunications, entertainment and defense interests.

All told, Vermont's senior senator raised $187,000 in PAC money over the past three months and more than $1.3 million since he was reelected nearly six years ago.

Those figures don't include individual contributions from the lobbyists and executives who work for such companies. On a single day in June, for example, at least 11 board members and employees of another defense contractor, General Dynamics, cut checks to Leahy's campaign. They included board chair Nicholas Chabraja, who has donated $5,400 to Leahy this cycle, and General Dynamics Ordnance and Tactical Systems president Firat Gezen, who has contributed $1,000.

Leahy has spent years going to bat for Gezen's division, which does work on the company's Hydra-70 air-to-ground rocket system at a facility in Williston. According to the senator's spokesman, David Carle, there's a good reason for his support — and it's not the campaign cash.

Leahy's also proud of the federal money he continues to steer to Vermont — even after Congress eliminated earmarks in 2011 — and he'll surely make that the centerpiece of his reelection bid. But as he faces off against Republican Scott Milne, the money he's collected from the likes of United Technologies and General Dynamics could be as much a liability as an asset.

Consider the contrast: Leahy raised a grand total of $613,000 in the past three months alone — and more than $3.9 million since his last reelection. At the end of June, he had nearly $3.2 million in the bank.

"People are weary of career politicians who run big-money campaigns funded by lobbyists and special interests." Scott Milne tweet this

The Pomfret Republican acknowledges he'll be "outspent tremendously" in the coming months, but he doesn't think that's a problem. He notes that he nearly defeated Democratic Gov. Peter Shumlin two years ago despite a fundraising disadvantage. Milne thinks Vermonters are looking for something new.

"I am hearing that people are weary of career politicians who run big-money campaigns funded by lobbyists and special interests," Milne says.

He may be on to something. Leahy's junior colleague, Sen. Bernie Sanders (I-Vt.), put campaign finance reform at the heart of his race for the presidency — and managed to raise $229 million almost entirely through small donations. Vermonters ate it up, handing him 86 percent of the vote in the March primary.

The question is: Will voters hold other Vermont politicians to the Sanders standard?

Already, some pols are changing their ways. Earlier this year, all three Democrats running for governor — Matt Dunne, Peter Galbraith and Sue Minter — pledged to forswear corporate campaign contributions. That was a dramatic shift from Shumlin, who raised hundreds of thousands of dollars over the years from corporations, lobbyists and other special interests.

But even some of those who felt the Bern aren't practicing what he preached.

Asked why they raise so much from PACs, Leahy and Welch give similar answers.

"In a post-Citizens United world, Sen. Leahy needs to be prepared for challenges not only in Vermont, but from big-money interests across the country," says Leahy campaign spokesman Jay Tilton.

Likewise, says Welch spokeswoman Kirsten Hartman, "Until the Supreme Court decision in Citizens United is overturned, Congressman Welch will continue to raise the resources necessary to wage a competitive campaign, to help elect Democrats in Vermont and to help Democrats take control of Congress from Tea Party Republicans."

It's unclear who Welch will "wage a competitive campaign" against. Not a single Republican stepped up to challenge him before the June filing deadline. (Interestingly, Welch donated $1,000 to the reelection campaign of Congresswoman Debbie Wasserman Schultz, a bitter Sanders foe. Hartman describes her as Welch's "longtime friend and ally.")

In the race for governor, candidates appear to be taking three different approaches to financing their campaigns: raising cash from corporations, out-of-staters and themselves.

Lt. Gov. Phil Scott, who's seeking the Republican nomination, is taking the corporate route. Of the $682,000 he's raised since last winter, nearly half of it, or $388,000, has come from business interests. While most of those donors are small Vermont companies, they include Tennessee prison contractor Corrections Corporation of America ($1,000), the Coca-Cola Bottling Company of Northern New England ($4,000) and Casella ($4,000).

Scott's biggest benefactor appears to be gasoline magnate Skip Vallee, who was a major donor to George W. Bush and owns R.L. Vallee and Maplefields. He and his family contributed at least $24,000 to Scott last month. A number of Statehouse lobbyists have also ponied up, including three employees of the corporate lobbying firm MMR: Andy MacLean, Warren Coleman and Laura Pelosi.

"It takes financial resources to run a sophisticated campaign, especially when you have to compete against a primary opponent with piles of Wall Street money and Democrats who are raising unprecedented sums out of state," she says.

The Wall Street money to which Wilson refers belongs to retired Bear Stearns executive Bruce Lisman, who is challenging Scott for the GOP nomination. To date, the Shelburne Republican has contributed nearly $1.6 million to his own campaign. He's managed to raise just $287,000 from other human beings.

On the Democratic side, Minter is leading the pack. The former transportation secretary raised $893,000 since last fall and has $297,000 available for the final three weeks of the race. Dunne, a former Google manager and state senator, has taken in $820,000 and has $208,000 left.

Both have looked beyond Vermont's borders to finance their campaigns. Nearly half of Minter's haul, or $445,000, came from out-of-staters. Fifty-three percent of Dunne's money, or $436,000, did. Scott, in contrast, raised 93 percent of his cash from Vermonters.

The third Democrat in the race, Galbraith, can't seem to find anyone in these parts to donate to his campaign. Of the $129,000 the former ambassador has raised, only $13,363 has come from Vermonters — and that includes $2,000 from brother James Galbraith, the University of Texas economist, who apparently considers the Green Mountains home.

Candidate Galbraith has made up for the shortfall by loaning his campaign nearly $200,000, much as he did when he ran for Senate. He says he hopes to raise enough money to pay himself back.

"The truth is, I think the way we fund campaigns is disgusting, which is calling up everyone you know and asking them for money," says Galbraith, who tried to ban corporate donations when he served in the Senate. "I don't think candidates should be telemarketers. It's a terrible system."

He has a point.

But even the purest of the pure seem to be willing to compromise their values. Last month, Sen. David Zuckerman (P/D-Chittenden) wrote to every registered lobbyist in Vermont asking for contributions to his campaign for lieutenant governor.

"If you have clients supportive of the work I have done or my collaborative approach to policy development, please help me reach them," he wrote, asking for names of other potential supporters. "If you'd be willing to send them a mailing on my behalf, please let me know how my campaign could assist you."

Lawmakers in Vermont are barred from hitting up lobbyists until the legislature adjourns for the biennium. This year, that happened June 9. Zuckerman's letter was dated June 10.

A die-hard Sanders supporter, Zuckerman has long advocated for campaign finance reform. So what on Earth is he doing hitting up lobbyists?

"Ultimately, as individual voters, if they wanted to support me, I'm just as happy to have their donations as anyone else," he says, noting that he does not take money from corporations. "I would say I have such a long track record of being very clear on my positions, I think there's really no doubt about where I stand on issues."

In the end, Zuckerman didn't convince many lobbyists to open up their wallets.

"I was actually hoping a few more would," he says with a laugh.

For months, Milne and Lisman have refused to say whether they'll support their party's presumptive nominee for president. Both argued there was still a chance that someone other than Donald Trump would emerge from the Republican National Convention.

Now that the GOP has pulled the trigger and nominated the racist, sexist, xenophobic demagogue, have Milne and Lisman made up their mind?

Earlier this month, the Rutland Herald and Barre-Montpelier Times Argus ceased publication on Mondays, Tuesdays and Wednesdays. Now, the two papers are losing half of their Statehouse team.

"Education is something I've always been interested in," says O'Gorman, who joined the Herald in 2008 and moved to the Statehouse beat in 2014. "I covered the legislation that ended up becoming Act 46, so it's something with which I'm intimately familiar."