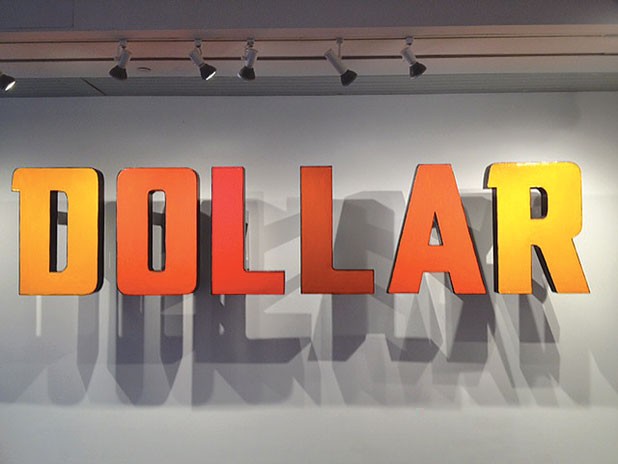 First-time visitors to the BCA Center could be forgiven for feeling confused by the current exhibit. Cantilevered from one wall of the front gallery are 3-foot-high capital letters spelling out the word “DOLLAR.” Across the room, a large yellow sign on the wall declares, in contrasting red letters, “FALL SALE.” On the floor before it sits what appears to be a rectangular folding table. Its white surface holds neat rows of maple leaves in various stages of pretty decomposition. Nearby, maple-syrup cans are arranged on one shelf; Vermont postcards stand end to end on another.

What is this stuff? Well, for starters, it’s all wood. “Appears” is the operative word here.

While not exactly trompe l’oeil, Conrad Bakker’s creations certainly trick the eye. But his high-concept exhibit, “Untitled Project: Seasonal Economies,” is about more than mimicry. On his website, the Illinois-based artist suggests that his ongoing projects “engage a variety of social, institutional and consumer contexts, utilizing humor, contextual awareness, formal play, interventionist strategies and imperfect carving and painting techniques.” Bakker’s talk at the opening of his Burlington exhibit was more specific. The pieces in the front gallery, he said, take on Vermont’s seasonal commodification, aka foliage.

For viewers with that in mind, his “Fall Sale” installation acquires meaning — tourists do indeed spend good money to come here and witness the turning of the leaves. That “DOLLAR” sign? Its appropriation of dollar-store iconography is blatant, but Bakker doesn’t settle for the obvious; he has instructed that each letter be repainted every week of foliage season. And so what were various greens to begin with are now autumnal shades of yellow, orange and red. Given that “Untitled Projects” extends until November 24, it’s not clear what those colors will become during Vermont’s unmercantile stick season. It would be cool if the letters simply fell to the ground, like the leaves they represent, but that’s probably not going to happen.

Two other bodies of work manipulate Vermontiana to more certain ends. Bakker’s painted-wood facsimiles of vintage maple-syrup cans perch on a shelf beside their plastic or glass contemporary equivalents from local sugarmakers (indicating another seasonal economy). Here the artist has enacted an equal exchange of handmade goods; at show’s end, the sugarmakers will take possession of the sculptures, and Bakker will get a generous supply of Vermont maple syrup. It’s a subtle and somewhat humorous way to address the concept of value. Is he literally suggesting that each of these artworks is on par, cost-wise, with a gallon of syrup? It doesn’t matter; another point about commodification has been raised.

Bakker takes his vintage Vermont postcards — that is, hand-painted scenes on wooden blocks — to another commercial level by putting them up for sale on eBay. But there’s a globalization twist: The artist purchased the postcards on which he modeled his paintings from an eBay “powerseller” … in India. Bakker put his paintings on the auction site using the same titles, and prices, as the originals, during the peak fall color weeks. If and when they sell, the wooden “postcards” will disappear from the exhibit, underscoring the transient nature of the season and, perhaps, the cyclical nature of capitalism.

In the middle of the room, a solitary, bright-orange (wood) safety cone squats on the floor, its intent unknown. Unless it’s to mutely advise caution in the commodities business.

Even subtler are Bakker’s realistic trash receptacle — which some gallerygoers have utilized as such — and actual-size doorstops. In the rear gallery, there is nothing covert about the large mobile sign on a trailer bed. The bright-yellow sign reads, “R&lax and take your time” on one side and “S4LE!” on the other. The hitch end of the bedframe rests on a cement block, a book (The Theory of the Leisure Class) and a video (Slacker). Small realist paintings of a petite white trailer — detached from a car and sitting in various locations — line one wall. A faux Black & Decker Workmate Portable Project Center and Vise — complete with a “Made in China” stamp — sits awaiting a project. Meanwhile, an empty yogurt container is held firmly in the vise.

Again, all these items are wood. Even the 1969 Vermont Life magazine splayed on the floor, its cover selling another glorious October. The detail is impressive; it could be said that Bakker goes to a lot of trouble to make his point. Unfortunately, the point is not always evident — though the BCA Center assists with a handout including brief explanations of the works, an audio-guide phone number, and even some “questions for reflection.”

To be sure, Bakker concerns himself with monetary realities worth contemplation, and does so with intelligence and wit. Concept reigns in this exhibit, but if a viewer walks away from it extolling mainly the artist’s splendid trick on the eye, that’s not such a bad thing.