It's sheer coincidence that both the Center for Cartoon Studies and Vermont's only VA Medical Center call White River Junction home. At first glance, veterans and young cartoonists might seem to have little in common. Yet a new comics anthology published this week indicates they're not so disconnected after all.

To produce the collection, titled When I Returned, students and alumni of CCS teamed up with Upper Valley vets to illustrate their personal tales of war and homecoming. The stories use the immediacy of the pictographic arts to relate a broad range of true-life military, and post-military, experiences.

Second-year CCS students James D. Lunt, 41, and Kelly Swann, 30, coedited and designed the book. The project began when CCS instructors realized that the hospital two miles from their school was probably bursting with incredible stories.

"Especially in an election year like this, you will hear a lot of talk about 'the troops' and 'respecting the troops,'" said Lunt, "and then there's almost nothing after that. Troops end up being an abstraction ... But these people who live in your community have these real experiences that have shaped them," he added, "both in and outside of the military."

The Cartoonist Veteran Project got off the ground more than a year ago, when CCS arranged a couple of informal presentations at the VA to allow veterans and cartoonists to exchange ideas. (Seven Days wrote about the project's launch in the 2015 Cartoon Issue.) Lunt and Swann had coedited a comics anthology as first-year students, so CCS cofounder James Sturm tapped them to lead this project as well. The new anthology, funded in part by a grant from the National Endowment for the Arts, counts as thesis credits for the coeditors. 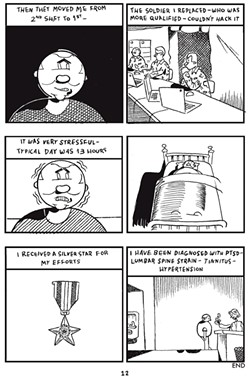 Eventually, the intra-town bridge building yielded a half dozen cartoonist-veteran pairs, each of which supplied a chapter to When I Returned. Those collaborative chapters recount the tales of soldiers from World War II, Vietnam, Iraq and other conflicts, as well as stories from what is often the most challenging battlefield of all: the postwar homefront. The illustrators' styles range widely, from the deceptively simple rounded forms of Jeff Lok's "Vince" to the stark, newsreel-like appearance of Wade Simpson's "White Christmas." Acclaimed cartoonist and 2015-16 CCS fellow Noah Van Sciver drew the book's cover.

"Everybody's art in the book looks really different," said Lunt, "[and] reflects the individuality of each veteran's story ... It helps to personalize things even more."

One of the most affecting pieces in When I Returned is "Kevin's Story," to which Swann and Lunt both contributed. It tells of a vet who, while walking home on a snowy New Year's Eve, was assaulted and raped. "It took quite a while," one panel reads, "but I learned to tell my story without crying or getting angry and blackout drunk." The comic underscores the transformative and therapeutic power of artful storytelling.

One tale in the anthology is unique for being told from two different perspectives. Mike Rodriguez, a 31-year-old veteran of the Iraq conflict, is now a resource sharing assistant I at Dartmouth College in Hanover, N.H. He's also a student in the school's master's in arts and liberal studies program, and he's chosen an unusual format for his thesis on energy policy: comics.* "I wanted to be able to put a prose back into this work, a visual and literary prose, instead of just citing stuff and regurgitating information," Rodriguez explained in a phone conversation.

He drew a portion of his own story in the anthology; the rest was illustrated by CCS alum Iona Fox. Their narrative and graphical styles are strikingly different, and Lunt believes the resulting multivocal approach enriches the story. "I think there's something really elegant and wonderful in getting Iona's view of Mike, and then Mike getting to share his own experience," he said.

When I Returned also features the work of New Bedford, Mass.-based artist and Vietnam vet Thomas Marino, who has been creating the web comic "That's Life" for years as a means to deal with posttraumatic stress. The anthology includes several examples of Marino's bluntly hilarious strip.

"It wasn't something we were looking for, necessarily," says Lunt. "It happened to be a beautiful coincidence that there were already veterans connected to the VA who made comics."

The overarching message of When I Returned is clear: Just as there is no single way to draw a cartoon, every veteran's experience is unique.

*Correction, April 20, 2016: An earlier version of this story misidentified the Dartmouth master's program in which Mike Rodriguez is a student.