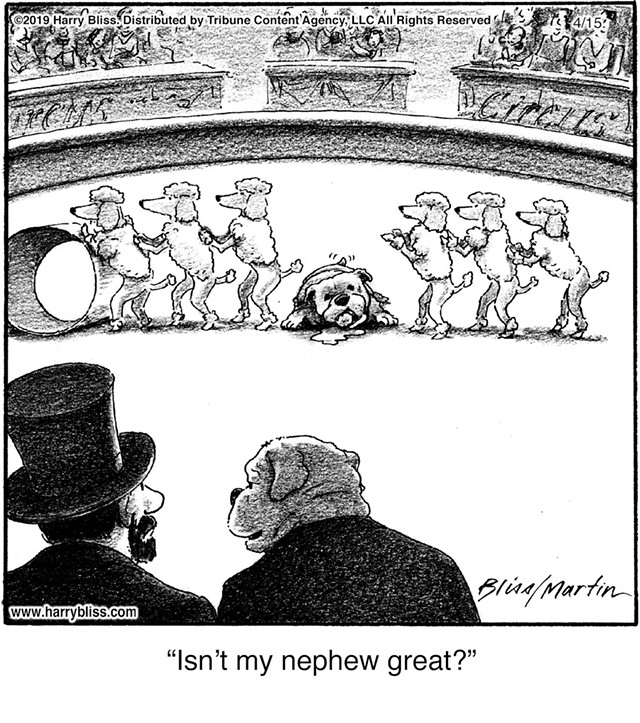 Burlington-based cartoonist Harry Bliss has been on a roll for so long, it's a wonder he isn't shaped like a log. He's illustrated more than 20 children's picture books and is finishing another, with author Joanna Cotler, titled Sorry, Not Sorry. His "diary" series with author Doreen Cronin — Diary of a Worm, Diary of a Spider and Diary of a Fly — provided the basis for an adorable animation series called "Bug Diaries," which launched April 12 on Amazon Prime. And, in addition to syndicating his single-panel cartoon "Bliss" (which appears in Seven Days), he continues to sell a couple of cartoons per month to the New Yorker, Bliss says. He's also created 21 cover illustrations for the magazine to date.

"I was talking with my [New Yorker] editor, Françoise Mouly, and she said she'd just had dinner with Steve Martin and he had some cartoon ideas," explains Bliss, 55. Turns out, "He's a fan of my work. I was flipping out — I'm a huge fan of his.

"I didn't think it would go anywhere," Bliss admits. But the next thing he knew, Mouly sent an email introducing him and Martin, and a partnership was born.

For a little more than a month, Martin has been sending Bliss daily gags — often three to five of them — that Bliss draws and sends back. (Apparently drawing is one of the few things Martin doesn't do.)

Bliss knew the two were on the same wavelength, joke-wise, when Martin sent him some ideas that he had actually already done, verbatim. "It's naïve to think that just one person in the world could have one idea about, say, the Grim Reaper," he acknowledges, referring to one such shared gag.

Before he draws an idea Martin has suggested, Bliss says, "I have to remove the Steve Martin I know, that I grew up with, from my mind. I have to read it as though it's just an idea floating there."

The celebrity factor could understandably be distracting. To a certain age cohort, Martin, 73, is a beloved icon of American humor, from his "wild and crazy guy" period on "Saturday Night Live" in the 1970s to his roles in films such as The Jerk, All of Me, Roxanne, Father of the Bride, L.A. Story, Dirty Rotten Scoundrels and many others. He's penned more than a dozen books and performed in numerous comedy specials — including a show with Martin Short called "An Evening You Will Forget for the Rest of Your Life," now on Netflix. Then there are Martin's performances with Grammy-winning bluegrass band Steep Canyon Rangers, with whom he plays banjo.

Now, Martin can add "cartoonist" to his résumé. So far, the New Yorker has bought three cartoons with the Bliss-Martin byline, Bliss says. But the duo has created "35 or 40" for the syndicate.

Sometimes, though, a gag just doesn't work on paper. "Yesterday I got one [from Martin] with a golfer lining up a shot," Bliss relates. "Behind him is the ball, and the hole, and there's a speech balloon that says, 'Over here' — like a little voice inside the hole. I drew it and sent it to a couple friends, and they didn't get it. So Steve and I think it's funny, but it doesn't work.

"What's funny to one person isn't to another," he adds. "And some just like the absurdity of it."

Bliss notes that drawing cartoons is not a profitable enterprise — he derives most of his income from illustrating books. And the Bliss-Martin collaboration will add another to his list. After the two discussed the idea of a cartoon compilation, "not a week went by and we had a book deal!" Bliss exclaims. Celadon Books announced Martin's forthcoming cartoon collection with Bliss on Monday.

Doing the book together is "a good way to get paid" for cartooning, says Bliss. Perhaps more importantly, he says, it's been "incredibly fun" to share this venture with Martin. Thing is, they still haven't met or even talked on the phone, instead communicating entirely over email. "Sometimes we'll go back and forth for 45 minutes — that's a lot of time for Steve Martin to be bullshitting about cartoons," Bliss says.

"We'll meet someday, but there's no rush," he adds. "This relationship is special."

The still-untitled compilation is due out next year.