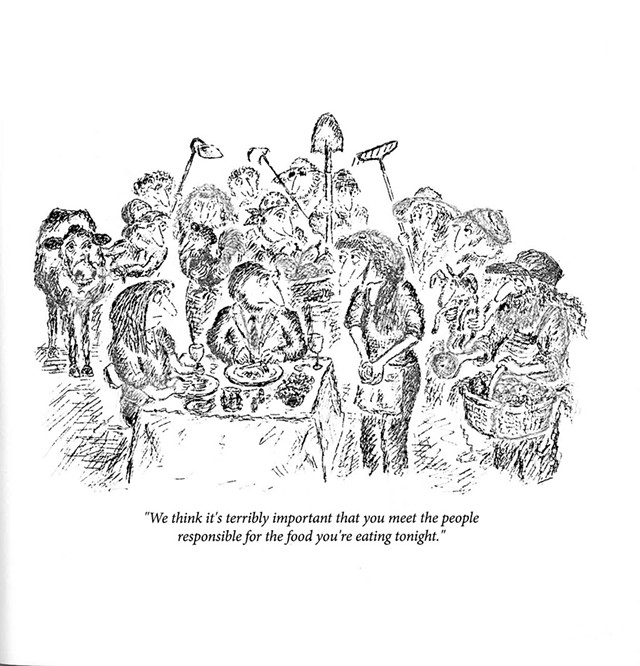 His cartoons are instantly recognizable: scratchy lines; fuzzy, long-nosed characters; and wry captions that could be comments overheard at a Vermont farmers market or a tony Manhattan restaurant. And they often were, noted Ed Koren in a recent phone interview.

The native New Yorker, longtime Brookfield resident and former Vermont cartoonist laureate has just released his 20th book, Koren. In the Wild. It's a compilation of cartoons previously published in the New Yorker that both celebrate and satirize the preciousness of Vermonters and the pretentiousness of urbanites.

But, as in all of Koren's cartoons — including the more than 1,100 that have appeared in the New Yorker since 1962 — when he pokes fun, he never inflicts pain or even breaks the skin. His barbs are more like a rubber knife that tickles and bemuses his targets.

Case in point: Years ago, Koren drew a cartoon featuring a couple he called the Garbers. Its caption read, "The Garbers are people who have been through it all and survived." In response, the cartoonist recalled, a family named Garber wrote him a letter saying: "How did you know? That was us! We've never met, but that's precisely what our life is like!"

The cartoons in In the Wild don't specifically mention Vermont or New York City. Making those connections is left to author Howard Norman, a longtime friend of Koren's, who wrote the book's preface; and to Ben & Jerry's cofounder Ben Cohen, a fellow "Jewish guy from the suburbs of New York City," who wrote an appreciation.

Still, Vermonters and New Yorkers alike are bound to recognize the typical, iconic settings of Koren's cartoons: a dinner table, a cocktail party, the front porch of a general store.

Koren didn't select the cartoons that appear in the book; that was done by Margot Zalkind Mayor, his editor and publisher at Button Street Press in Newfane. Her idea, Koren explained, was to compile cartoons that traverse what he called "the DMZ between urban and rural existences, which I cross back and forth quite a lot."

Koren, who at 82 still volunteers with the Brookfield Volunteer Fire Department, doesn't talk much about his process, except to say that inspiration for a cartoon often comes to him "in a flash." But the final product may take him a week or more to execute.

What does it say about a state that it even names a cartoonist laureate? Perhaps that Vermonters have mustered enough courage to laugh at themselves and not take themselves too seriously, Koren surmised.

"A person without a sense of humor is like a wagon without springs," he said, borrowing a quote from 19th-century minister and social reformer Henry Ward Beecher. "It's jolted by every pebble on the road."

Speaking of Ed Koren, Koren: In The WIld