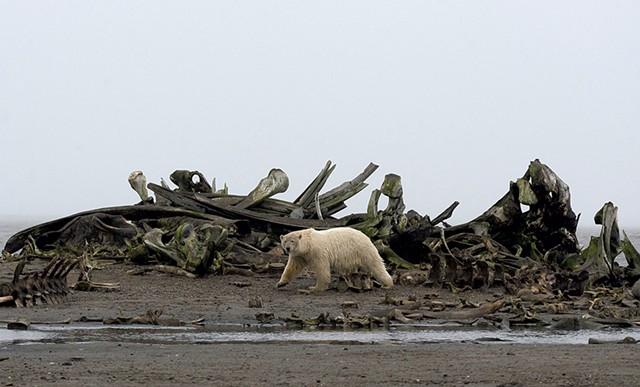 What gets you first is the gaze. Direct, personal and full of meaning, yet unreadable.

The polar bears are rooted in a place and a time: Kaktovik, a flyspeck of an Inupiat Eskimo village on Barter Island in the Beaufort Sea, within Alaska's Arctic National Wildlife Refuge, where they were photographed by Norwich's Stephen Gorman in 2017. The illustrated creatures, for lack of a better word, are of practically the same vintage, only they spring from the mind and hand of famed New Yorker cartoonist Ed Koren, who lives in Brookfield and was Vermont's second-ever cartoonist laureate.

As of March 12, you can find Gorman's photos and Koren's illustrations together on the walls of the Peabody Essex Museum in Salem, Mass., one of the nation's top-tier art museums. The exhibition they share, "Down to the Bone," will hang for almost a year. And, though it was serendipity that put the works of these two very different artists together, the sentiments behind those works are mutual. If you find those gazes unsettling, there's a good reason.

"This is ecological overshoot, and climate change is just one symptom." Stephen Gorman tweet this

Gorman first visited Kaktovik in 2005. As a photographer, author and outdoorsman, he's made a specialty of traveling to remote and wild places to capture images and stories of endangered wildlife, the landscapes they inhabit, and the traditional cultures of people who've shared that land for a very long time. That summer of 2005, he got to Kaktovik by kayak, paddling from the Brooks Range to the Beaufort Sea and then across Kaktovik Lagoon, which separates the village from the mainland.

"The lagoon was only a couple miles, but it was still paddling in open water in the Arctic Ocean in polar bear country," he says in an interview. "It was not something you undertake lightly." That summer, he recalls, the pack ice was visible about a dozen miles offshore.

When he returned in 2017, the pack ice was hundreds of miles offshore. It was startling evidence of the impact of climate change. So was pretty much everything else Gorman saw.

"Parts of the village are literally washing away due to rising seas and increasingly violent storms," he wrote afterward in an essay to accompany his photos. "The permafrost beneath the village is melting. Ice cellars once used for storing whale meat are collapsing ... The ice-adapted bowhead whales now migrate dangerously far offshore for hunters seeking them in small boats. And increasingly, the ice is out of reach for the many polar bears that find themselves stranded like castaways ... The bears are climate refugees facing extinction."

That, in a nutshell, is what Gorman aimed to capture with his camera. 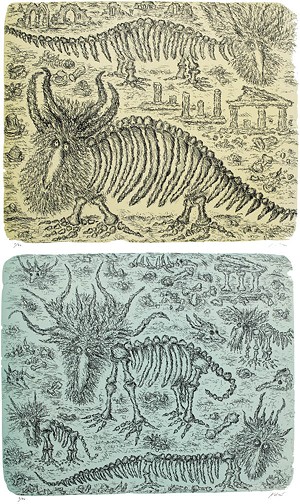 Koren, of course, has been known for decades for his fuzzy humans and wry, acute observations of urban and rural life. And for his expressive, phantasmagoric creatures.

When Star Wars came out in 1977, Washington Post film critic Gary Arnold wrote, "There's a rapturous moment of whimsy during the cantina sequence in which we briefly glimpse one monster beginning to laugh heartily at another monster's unheard joke. It's as if an Edward Koren cartoon has suddenly sprung to life."

In the '80s, Koren played with drawings inspired by the dioramas in New York City's American Museum of Natural History, with their animals and people that gaze straight at visitors.

"It was like a big story you could then get into on your own about this moment: Why are they there? What did they just do? What are they about to do?" Koren recalls in an interview.

He moved on to other things, but around 2015, he suddenly found himself returning to the theme. In the interim he'd plunged into reading about climate change, especially New Yorker colleague Elizabeth Kolbert's potent work on catastrophic shifts, David Wallace-Wells' The Uninhabitable Earth: Life After Warming and, more broadly, Jared Diamond's Collapse: How Societies Choose to Fail or Succeed.

Not surprisingly, these put him in a somber frame of mind. "The more I read," he says, "the more alarmed I got."

Koren has never been a political artist — more of a sociological one — but the result was a set of drawings of creatures who, as he puts it, are "surrounded by the remnants of an earlier civilization, and they're trying to make sense of it: why it collapsed, are they dying and where are they going?"

Koren and Gorman knew each other tangentially through a mutual friend, Stephen Kellert, who was Gorman's adviser at the Yale School of the Environment and, as Gorman says, "probably the world's foremost expert on how culture shapes our relationship with nature." 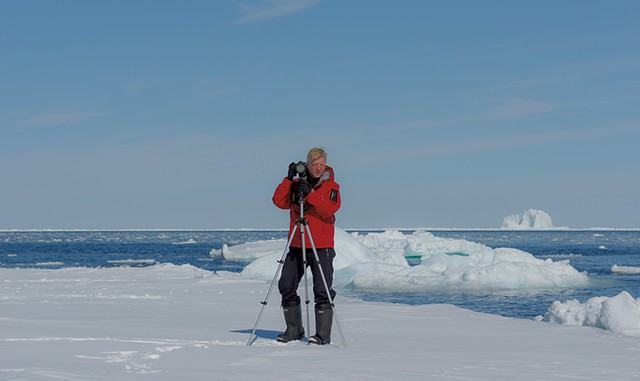 So when Koren exhibited his new drawings at BigTown Gallery in Rochester, Vt., Gorman and his wife, Mary, headed over the gap to see them. As they walked in, Mary looked at the drawings on the wall. "You know," she said, "Ed has drawn your photographs."

What they have in common, Gorman says, is a sort of postapocalyptic pathos. "My bears are climate refugees staring at extinction, wandering like the walking dead scavenging bones. How can these iconic symbols of the wilderness be reduced to gnawing on gristle to stave off starvation?

"Ed's creatures are equally pathetic in that they're surrounded by the detritus of a vanished world," he continues. "Both are looking straight at you and asking, 'Why did you do this?' 'How did we get to this point?'"

Neither Gorman nor Koren really expects the audience for "Down to the Bone" to rush out and mount the barricades or pursue a campaign for the world to return to a preindustrial way of life. Though Gorman, at least, wouldn't mind.

"To me, it's important that people see this is not just climate change," he says. "This is ecological overshoot, and climate change is just one symptom. We have overshot our planetary boundaries — the ability of the planet to absorb our waste and regenerate natural resources for our use.

"Consumer capitalism is the hammer that is smashing the planet," he goes on. "I want people to come away from this exhibition understanding that this is a systemic problem, and it will not be fixed by techno-utopians."

For his part, Koren is philosophical. "Most of us are not paying too much attention. We're going about our lives in the fairly conventional ways we've always done," he says. "You and I can find many examples of people who bemoan the state of the climate and yet are going off to some Caribbean place for a month, then will take a tour of the Rhine. It's mind-numbing. And these are people in the environmental movement."

He adds, "All around there's life going on without any real sense about how each contribution, no matter how small, is adding to the messy stew."

Koren's old friend Howard Norman, the novelist, wrote about the cartoonist's "sketches for the end times" in a recent essay on Literary Hub. "I've given the drawings somewhat pessimistic and even forbidding titles, like 'Thinking About Extinction,'" Koren told Norman. "But had I provided more existential captions, it might finally have been the same for each one: 'Who were we and what were we thinking?'"

And if we ask ourselves those questions, Koren tells me, "Maybe there's a little spark of light. I don't believe for a second that I will have any effect on anything, but it does make me feel like I've worked diligently for something more important than a yuk."

This story first appeared in the March 4 edition of Rob Gurwitt's Daybreak e-newsletter. Subscribe at daybreak.news.