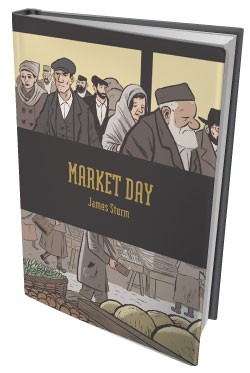 As Vermont-based cartoonist James Sturm’s new graphic novel, Market Day, begins, the sun hasn’t risen yet, a bearded man has just woken up, and his wife is still in bed. The man slices bread, pours coffee, buttons his coat and steps into the yard, bleary-eyed and slouched. Those few first panels have no text, but they set the mood for the rest of the novel: quiet, reflective and a little dark.

Market Day tells the story of Mendleman, a Jewish rug maker and soon-to-be father in early-1900s Eastern Europe, who discovers he can no longer make a living from his art. On a trip to the market one day, he learns that the owner of a distinctive shop — and sole patron of his work — has retired without warning, leaving the business in the hands of his son-in-law, who is only interested in cheaply manufactured merchandise.

Mendleman, a proud artisan, spends the rest of the day trying to sell his handwoven rugs elsewhere, swallowing his pride and coming to terms with a new reality: He may have to give up his art.

“Art shaped the way Mendleman saw the world; it forged a community for him,” Sturm says in a phone interview. “I thought of the book as a cautionary tale, too — how critical it is to keep making work. It’s the thing that helps you bring the world together, understand the world. When you stop making art,” he adds, “there is a part of you that starts giving up those things that are fundamental to living a healthy life.”

A lot has happened for Sturm in the nearly 10 years since the release of his graphic novel The Golem’s Mighty Swing. He moved to Vermont and had two children, cofounded the Center for Cartoon Studies in White River Junction and worked on various collaborative projects.

Sturm has long been fascinated with Eastern European Jewish life before World War II. Over the last 15 years or so he has collected images from that time that infuse his work. For Market Day, Sturm was particularly influenced by Russian American photographer Roman Vishniac, famous for his intimate portraits of Jews in the villages and ghettos of Eastern Europe in the years leading up to the Holocaust, and by Alter Kacyzne, another Russian photographer whose portraits capture Jewish life in Poland after World War I.

In Market Day, Sturm says, he wanted to avoid showing his characters through the prism of the Holocaust tragedy, because “There’s something about that that robs these people of a certain dignity.” But that’s not to say the story isn’t bleak at times. “Even before the Holocaust, it was no picnic for the Jews in the settlements,” Sturm says.

Still, he holds on to a sense of lightheartedness even when Mendleman’s fate seems grim. In addition to a few great jokes peppered into the story, Sturm’s drawing style keeps the novel from feeling too heavy. He manages to marry the solemn intimacy of those Eastern European photos with the spare, clean style of one of his favorite comics, “Little Lulu,” which he still reads with his children.

“It’s kind of a struggle to bring those two things together, in a way, because they are just so far apart aesthetically,” he notes. “But I think the book itself is about trying to reckon polarizing influences, making a living versus making art. Up until this eventful day, [Mendleman] lived a kind of charmed life: Making a living and making art were one and the same for him. This day those two things kind of come apart.”

Whether they come apart forever is left a mystery.

“At the end, he’s kind of saying he is giving up his art, when he says to [his friends], ‘I’m going to sell my loom,’” Sturm says. “But his friends know him better than that.”

Wonder what Sturm’s friends are saying about his recent decision to give up the Internet? In a cartoon essay published in Slate last Wednesday, he explains his admittedly ambivalent resolution to slow his life down. The irony did not escape him, Sturm wrote, that he will be “documenting the no-fi experience with words and pictures” … on a blog. Check Slate every couple of weeks for a new post. Otherwise, Sturm can be reached via snail mail c/o The Center for Cartoon Studies, P.O. Box 125, White River Junction, VT 05001.