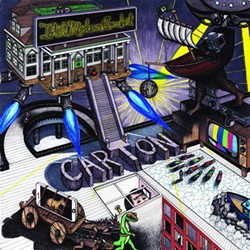 The first time I saw Carton I couldn't believe their name hadn't been taken. A few minutes later I couldn't believe they had been under the radar for so long, hiding out near Windsor, where I assumed they were hailed as kings. Their third release, Total Modern Comfort, is Carton's confirmation. It shows them at home within their own self-containment. Theirs is a sanctuary borne of skepticism toward the external world's faults, which they mock with guitars; and of paranoia, which poohbah Ryan Hebert's lyrics frequently confront. In this universe, Carton shape-shift not widely but far enough, and masterfully.

The record can go from seesawing guitar lines in call-and-response with drummer Bruce Black and then to a warm, lingering wash. Black, whose drums sometimes sound like he's beating them with bats, is always in lockstep with bassist Brendan Dangelo.

In opener "From the Mouth," the bridge hits with sweet, anthemic undulations that one wishes would last longer. But we're better off for the brevity. Hebert and Kiel Alarcon steer their energy into arpeggiated guitar lines that often recall late heavy-metal ace Randy Rhoads.

Hebert cleanly channels his ideas from mind to music, and the players approach these songs organically. With "Hologram," they give us pop, briefly mellow and sparse and then relenting to an onslaught. The tune's verse starts with Hebert's signature idle musings. "I let the TV tell me what I want to think," he sings wryly. Lyrically, Hebert can veer into very good emo ("The keys to my apartment are underneath your eyelids"), but he doesn't stay long. Vocally, he makes leaps that more hesitant rock singers likely would avoid. The songs are better for his spine.

"Fun" also maneuvers on pop, albeit disguised. This one summons the California sound but replaces its characteristic jangle with what sounds like enough Marshall stacks to make J Mascis blush.

Trading Vans for Chucks, the tune "Doomed Doomed You're All Doomed" stabs at punk, hitting it not quite squarely in the gut but near enough.

In the final track, "Little Toes," frail guitars expand, explode, ring out once more, and exit as an echo. And far too soon, the record ends. All hail King Carton.