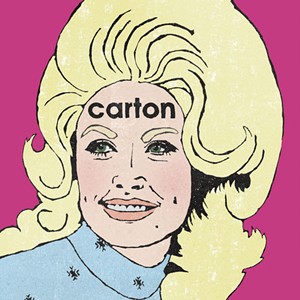 Sixty-nine. That's how many releases Windsor-based collective What Doth Life has released in 10 years of existence. Sixty-nine albums! Let's just sit back for a moment and appreciate that statistic alone for what it is. No other local label, collective, consortium, imprint or league of super-friends can even come close to that sort of prolific output. As it celebrates a decade of documenting southern Vermont's vibrant music scene, WDL has released Carton's new EP, DOLLY.

Along with the Pilgrims, one could argue that Carton are WDL's flagship band. The members are all founding fathers of the collective and have put out a steady stream of music, with four releases over seven years. They also might be the label's best band, which is saying a lot considering the talent on display down south.

Carton possess that true spirit of alternative rock, the kind that maintains heaviness and weirdness without sounding like the thousands of faceless bands that all but ruined the genre more than a decade ago. They have dynamics, they have chops and, best of all, they have the songs.

DOLLY launches with "complacent buffoon," a Dinosaur Jr.-like rocker, all stomp and wry humor. Singer-guitarist Ryan Hebert definitely has a hint of J. Mascis in his writing and singing, but not so much that it dims the originality of what Carton do. The band's ability to create a delightful cacophony is evident at the end of the track, with Hebert and Kiel Alarcon's guitars buzzing and wailing over the rhythm section of drummer Bruce Black and bassist Brendan Dangelo.

The EP captures the spirit of aggression that wedded college radio from the '80s with the indie-rock explosion of the '90s. "wotUrllyR2thm" drives with the grunge nihilism of Screaming Trees, with big chugging guitars and screaming feedback riding Black's high-energy drumming. By the next track, "you were wild here once!," the band has settled into a groove you might find on the new DIIV record, all breezy pop and a chorus that delightfully devolves into noise before snapping right back to the head-bobbing verse.

It isn't clear whether the EP is in some way a spiritual sequel to the band's 2014 release, Carlton, or not. While that album's cover featured a stylized depiction of Carlton Banks from "The Fresh Prince of Bel-Air," DOLLY features a similar rendition of Dolly Parton. Artist Moira Hershey created both covers. It's just another piece of Carton's weird mystery, and long may it continue.

The EP closes with the blistering "Lester Holt." Hebert all but sneers the words "I laid down my weapons, they don't make sense anymore" as the track builds and builds until Alarcon unleashes a volley of shredded notes on his guitar. It's controlled chaos, and Carton have mastered the art.

DOLLY is loud and available at cartonvt.bandcamp.com. Visit whatdothlife.com for even more of Windsor's finest.