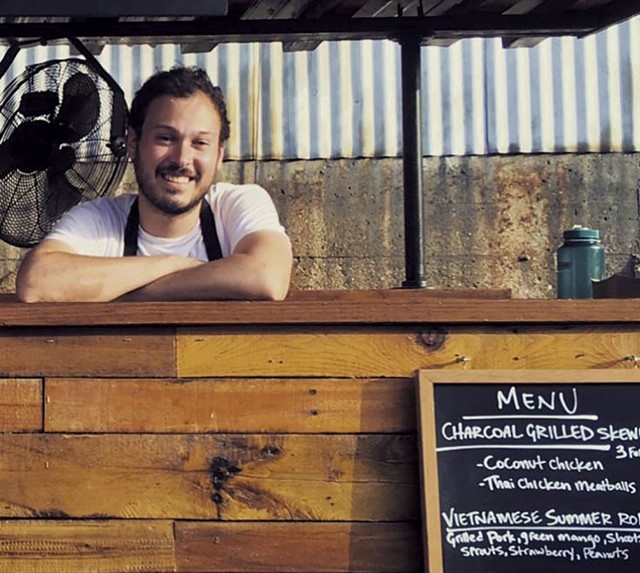 Shrimp toast at the taco shop? No, Burlington's Taco Gordo hasn't swapped its tortillas and margs for Thai-style chicken or sausage skewers. But on Sunday, the Old North End taqueria lent its kitchen to Carte Blanche VT mobile chefs Chris Donnelly and Mojo Hancy-Davis for a one-night pop-up supper. The event was the first in a periodic Sunday-night series that Taco Gordo owner Charlie Sizemore said will continue until outdoor eating season.

"[As a food truck], it's cool to be able to keep your name relevant during the winter," Sizemore said. A former four-wheeled chef himself, Sizemore added that his business benefited big-time from the pop-up meals he served at Misery Loves Co.'s erstwhile Winooski Incubator space in 2016. "That was really big for us," the chef said, "so it seemed like it would be cool to pay that forward."

Future events will feature mobile chefs such as Jean-Luc Matecat and Lindsay Taylor of Pioneer Food Truck & Catering (tentatively penciled in for March 10) and Lauren Johnson and Solomon Bayer-Pacht of Farmers & Foragers (date TBD). Noted barkeep Matt Farkas, formerly of Mule Bar, has agreed to mix the drinks throughout the series, Sizemore added. So, whatever's on the menu, visitors can expect cocktails tailor-made to match the cuisine.

And, in case you need an excuse for drinking on a Sunday, a portion of the beverage sales from each event will benefit the Chittenden Emergency Food Shelf. "They're amazing," Sizemore said of the nonprofit across the street from Taco Gordo. "And they're great neighbors. So raising money for them will be a pretty consistent thing for us."