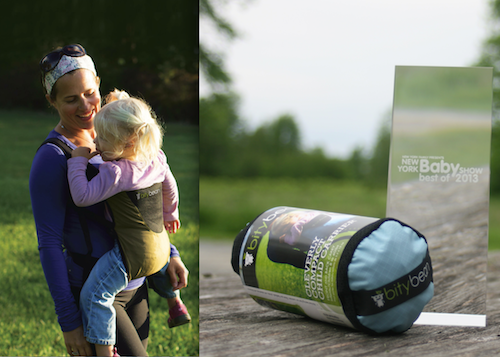 Size matters — at least where child carriers are concerned. So says Charlotte-based Bitybean. The company's sleek, unisex fabric carriers, created in 2012 by Vergennes resident Douglas Hartwell, weigh just eight ounces. When not in use, they roll up into a package that's roughly the size of a child’s water bottle.

As we reported last December, Bitybean made a big splash in its first year, earning a 2012 Innovation Award from the internationally recognized Juvenile Products Manufacturers Association. And a few weeks ago, Bitybean received its second major distinction: It took home one of five “Best in Show” awards at the New York Baby Show, held on May 18 and 19 in Manhattan.

According to an article in New York Family, the five winning products “comprise a range of innovation, function, design and value.”

Commented one judge, “A child carrier that you can tuck easily into a diaper bag? I desperately wish that I had one of these when my children were babies. Would have been a lifesaver. This is one of those products that causes you to think — why did no one think of that sooner?”

Want to try on a Bitybean carrier yourself? You can pick one up locally at Kids City, Outdoor Gear Exchange and Onion River Kids, or buy one online at bitybean.com.