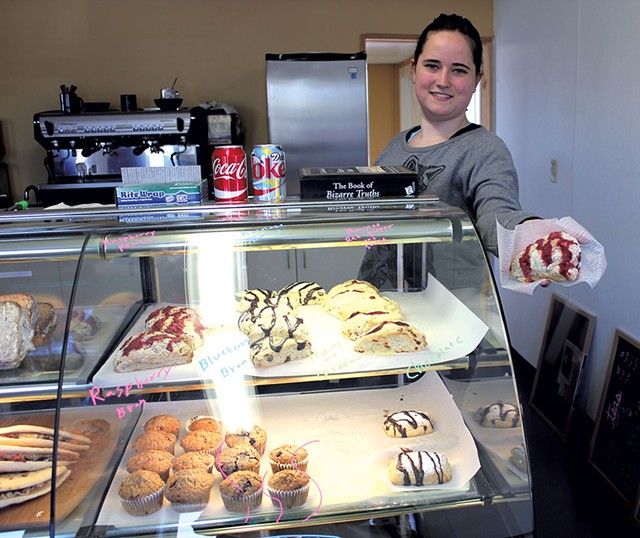 Drivers on Route 7 near New Haven may wonder if they've accidentally strayed off the main route when they see Carol's Hungry Mind Café. They haven't. A downtown Middlebury institution for nearly 11 years, Carol's has opened a new location at 7404 Ethan Allen Highway, the former site of Hill Top RV Center of Vergennes.

Hungry Mind co-owner John Melanson says he'd been thinking of opening a location on Route 7 for some time. "Then talk of the railroad bridge construction started," he says, referring to the $55 million railroad bridge replacement project just down the street from the Middlebury shop. "That got the Route 7 idea on the front burner," he adds.

Right now, the New Haven location serves baked goods, pastries and coffee at one end of the building — essentially a duplicate of the first Carol's. At the other end of the building, Melanson plans to open a restaurant that will serve "good ol' home-cooked food," he says. Think hamburgers, bacon and eggs, and sandwiches.

With chef Aidan Ryan on board, the diner will offer breakfast, lunch and dinner. Ryan formerly worked at the Shoreham Inn and studied culinary arts at the Northlands Job Corps Center in Vergennes.

Melanson is excited about his new hire. "With the enthusiasm of youth staring me in the face, I can't help but take a chance on a dinner place as well," he says. While he's not sure how dinner will shake out, "Aidan talked of doing some Mexican food in the evening," Melanson notes. He'll give that a try but also "listen to the people coming in to tell us what is popular."

If all goes as planned, the diner will open in June. "I am excited about New Haven. So many possibilities!" says Melanson. Meanwhile, the original Carol's location remains up and running, and he has no plans to close it.