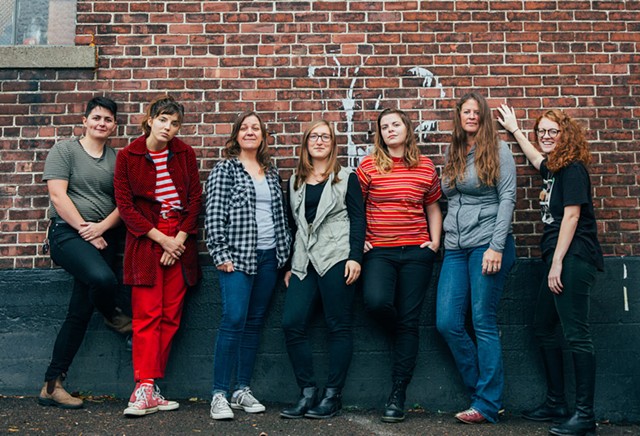 Cultural conversations constantly fluctuate, expand and evolve, and the buzziest topic at this year's roundtable is power: who has it, how they retain it and how it might best be distributed among those systemically deprived of it. Lately, formerly local singer-songwriters Caroline Rose and Abbie Morin have been thinking a lot about power, especially with regard to the music industry. It's no secret that the sector is male-dominated.

After brainstorming with Morin's manager and booking agent, Jenna Brower, and Katy Hellman of Burlington indie-rock band Julia Caesar and the Tuned In Collective, the musicians came up with an idea to help balance the gender scale, at least locally: Stage a show in which virtually every major role is performed by women or nonbinary people.

And that's exactly what they did. Rose and Morin — the latter of whom performs as Hammydown — and Julia Caesar perform on Thursday, November 16, at ArtsRiot in Burlington. Behind the scenes, a female team of professionals is producing and promoting this show. Higher Ground Presents — the off-site arm of South Burlington nightclub Higher Ground — is copresenting.  All of Higher Ground's proceeds, as well as a portion of Rose's and Hammydown's, will benefit the nonprofit day camp Girls Rock Vermont, a summer music and empowerment program for girls and gender non-identifying kids ages 8 to 18.

"We were chatting about the lack of diversity among bills in Burlington," says Brower in a recent conference call with Seven Days, Rose and Morin. "We wanted to do something about changing it. Not just people on the stage, but [also] who's booking the show, who's promoting and marketing it, and who's doing production the night of. We wanted to pull in as many non-men as possible."

Brower owns and operates the artist support company Paper Boy. She coordinated marketing and promotion with Betsy Rose Besser, ArtsRiot's marketing assistant and creative director of the online music publication and production company Noise Ordinance. (Be on the lookout for some ephemeral pieces of promotional street art around the city this week.) On the night of the show, ArtsRiot's Alyssa Solomon serves as production manager.

Rose and Morin cut their teeth, musically speaking, in the Queen City before moving to New York City and Northampton, Mass., respectively. Both say they rarely, if ever, participate in events with an agenda as clear-cut as this one.

"I think what's different about this show is that we're putting it together through a particular lens," says Rose. "You don't really understand that anything's wrong unless you have the short end of the stick."

But the gender disparity is not just about representation onstage, she notes. In April, a Burlington Free Press piece titled "Meet Your Burlington-Area Music Booking Agent" indirectly pointed out the lack of diversity among talent buyers at six of the most popular music venues in the area. Spoiler alert: They're all men.

"How many times do you see articles [with headlines] like, 'This man is running the music industry,' or, 'This man is behind the latest trend in music.' How come there aren't any women in these articles?" Brower asks.* "The story isn't necessarily who's booking. The bigger question is who isn't, and why.

"If there was more diversity in positions of power, you would see more diversity onstage, on magazine covers, in movies," Rose continues. "People are fed up with how male-dominated [life] is, [and we're] starting to see little inklings of change."

One of those "little inklings" is the Tuned In Collective, which Hellman founded earlier this year. The burgeoning member-owned cooperative of women, transgender and nonbinary musicians is putting marginalized people at the center of its discourse on ways to shift power away from male dominance in the local music scene. In the coming months, the collective plans to roll out a system of shared resources, such as musical equipment and rehearsal spaces.

Tuned In Collective staged its first live music event on October 28 at Maglianero Café in Burlington. According to Hellman, about 200 people passed through.

Morin points out that male dominance affects every aspect of the music industry, onstage and off.

"I think, in 13 years of playing [live], I've maybe had two sound engineers that were not men," says Morin.

That's why seasoned sound technician Rachel Capobianco, owner of Vermont Sound and Light, will handle the mixing console on the night of the show. In the '90s, Capobianco (née Bischoff) spent years drumming alongside sisters Alice and Julia Austin in the Burlington-based power-pop band Zola Turn. She's also a member of the all-female ska and rocksteady group Steady Betty.

"Anytime I get to work with women, it's a totally different dynamic," says Capobianco over the phone. She notes that non-male musicians seem visibly "more relaxed" when they see her in the sound booth.

Girls Rock Vermont director Linda Bassick (Steady Betty, Mellow Yellow) notes a similar level of comfort between her students and their female instructors. She explains that the camp focuses as much on empowerment as on learning to write music and play instruments.

"Girls are socialized to be really conscious of what they look like, how loud they are, and whether or not they're upsetting anyone," Bassick says by phone, adding that problem solving, group dynamics and building self-esteem are keys to the GRVT curriculum. "This is something that's sometimes hard for men to understand. Growing up with privilege your whole life [makes it] hard to see your own."

"There's nothing like seeing a bunch of girls in head scarves with electric guitars," Bassick says.

In the past year, both Rose and Morin unveiled updated versions of their respective sounds — for reasons not unlike the forces driving the upcoming show. Namely, the limitations the industry puts on female solo artists.

"It feels dramatic to say that I laid Abbie Morin to rest," the songwriter chuckles. "I felt boxed in by my acoustic guitar and the way that I felt I fit into the Americana genre. I was tired of wistful love songs and needed to harness more power."

One of the ways she did that was to write from a new perspective: behind her drum kit. Morin also cased her acoustic guitar and picked up an electric. This switch intensifies the feelings of frustration and the "fear of the mundane," as she puts it, on her latest release, Pizzaface.

Rose has similar reasons for transitioning out of Americana into the razor-sharp pop rock of her forthcoming LP, LONER, which drops in February.

"I'm curious what my music would be like now if the branding for women with acoustic guitars was a little bit more open-minded," she says. "Especially being a queer woman with a guitar, people will be like, 'Oh, you're the next Melissa Etheridge!' No disrespect, but I don't really identify with [her]."

Rose and Morin note that nearly half of the performers onstage at their event will be men — and that's cool with them.

"I don't think it's the kind of thing that has to be all or nothing," says Rose. "Just balance it."

Of course, the journey toward equilibrium is likely to be difficult for some — particularly those lousy with privilege.

"In order to give power to other people, you do have to relinquish some of [yours]," says Morin.

*Correction, November 8, 2017: An earlier version of this story misattributed a quote from Brower. Additionally, this article has been updated to clarify the proceeds that will be donated to Girls Rock Vermont.

The original print version of this article was headlined "Control Shift"