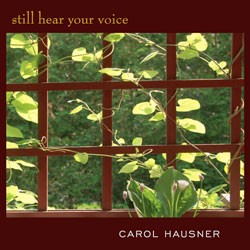 There’s certainly something to be said for experience. Carol Hausner, a Montpelier-by-way-of-Takoma Park, Maryland songstress, has been captivating audiences with her soulful brand of bluegrass for 20-plus years. Her debut solo effort, Still Hear Your Voice, is a harmony-laden affair with many of the friends and peers Hausner has crossed paths with in her extensive East Coast travels. Together they pick and fiddle their way from traditional bluegrass to country to roots-infused folk and back again, all the while highlighting one of the local scene’s purest and most passionate voices.

There’s a distinct ease in Hausner’s earnest delivery. The sentiments conveyed in her frequently emotive lyrics never feel forced or contrived. Instead, they seem to flow genuinely, conveying the album’s overriding theme of lost love and heartache without the all-too-common tinge of banality — and with just the right amount of twang. Her style recalls early-’70s-era Tammy Wynette, especially on country-flavored tracks such as “Nothing But the Wheel” and “Slipping Through My Hands.”

The traditional configuration of bass, banjo, fiddle and mandolin — along with Hausner’s acoustic guitar — highlights, rather than distracts from, the layered harmonies. In the Celtic-inspired standout “Rambling Heart,” Hausner takes the vocal high road over Ellis’ low harmony; intertwining fiddle and mandolin fade in and out between verses. Topnotch production, multiple backing instruments and an additional vocal tone come courtesy of all-around studio whiz Colin McCaffrey.

Even after so many years in the making, Still Hear Your Voice is worth the wait. Hausner’s debut deserves a place on the growing list of great bluegrass records to come out of central Vermont.