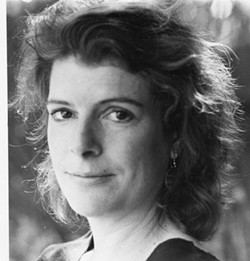 Carol Blackmer, 62, died on Friday, Oct. 30, in Modesto, California, following a brief illness. She was born in Modesto, and attended Grace Davis High School, as well as the Athenian School in Danville, CA. She graduated Phi Beta Kappa from Mills College in Oakland with a Master’s Degree in Early Childhood Education.

Carol will be remembered for her intelligence, beauty, grace, and keen wit by those who knew and loved her. She brought her own distinctive style to everything she touched. She loved cooking and sharing meals with family and friends, was an inveterate letter writer, and never forgot anyone’s birthday. Reading was important to her, and she had a special fondness for English mysteries. She had many close friends, near and far, who she cared deeply about. She was charismatic and funny, and at the same time very insightful, compassionate, and kind.

Carol grew up on a cattle ranch in Hickman, CA, and, as part of a farming family, won many awards for animals she raised and as an equestrienne. At both the Athenian School and Mills, she excelled in academics as well as painting and dance.

In 1975 she moved to Burlington, Vermont, where she lived for 19 years. She worked as a pre-school teacher, and then as a waitress and restaurant manager at The Black Rose Café, the Daily Planet, and the Old Dock in Essex NY. She began the tradition of children’s art shows at the Planet, and was part of a group of people who created a welcoming culture around food, music, and the arts as Burlington grew and changed.

In 1994, she returned to California and worked under John Ash at Fetzer’s Valley Oaks Food and Wine Center in Mendocino County. For the last 15 years of her life, she lived in Modesto, managing the family business and caring tenderly for her parents, who died in 2013.

She is survived by her two sisters, Joan Blackmer and Anna Blackmer, as well as her step-sister, Jean Waterman, and step-brother, David Waterman. She also leaves behind nieces Misa Blackmer, Meara McGinniss, and Lila Waterman; a nephew, Kitri Waterman; a grand-niece, Erin Guy; two god-daughters, Emily Warden and Maria Frei; and her Couture, Kiger, and Stevens cousins and their children.

There will be a private memorial for Carol in Modesto in early December.