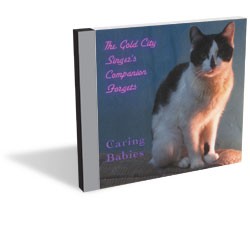 In the ever-expanding world of popular music, there increasingly is something to suit every taste, though certain works and styles may have a narrower appeal. For example, the strange sounds issuing forth from the experimental pop scene that orbits — at least locally — around Lawrence Welks & Our Bear to Cross and way-under-the-radar Burlington alt-venue Cheri’s Place.

Opinions on LW&OB2X generally fall into two distinct camps. On one side, the Burlington duo are hailed as pop-music messiahs, the unchained future of the genre. On the other, Welks are the two horsemen of the apocalypse, a deranged and unnatural affront to all things sonically holy. Caring Babies, the alter-ego of former Queen City resident Matt Mazur, may offer some common ground, existing somewhere in the space between resident B-town provocateurs Joey Pizza Slice and his mind-altered trash pop, and James Kochalka and his latter-day Game Boy Advance-fueled sonic bytes.

Companion presents a bewildering but strangely appealing mix of pop deconstruction and forward-thinking sonic exploration. In the span of a scant 23 minutes, broken into 20 fleeting vignettes, Mazur pokes and prods our collective sensibilities. He breaks down our expectations of what a pop song should be, and rebuilds those expectations into something else entirely. Not unlike the songs of label mates LW&OB2X, Mazur’s tunes are a queer abstraction of pop, almost unrecognizable yet somehow crudely familiar.

But where Welks overtly challenge listeners by fiendishly resurrecting the mangled corpses of pop conventions — often just so they can kill ’em again — Caring Babies take a gentler approach. Framed by a delicate skin of shaky synth and oddball beats and samples, a fractured heart beats at the center of Mazur’s disjointed musings on love, loss and grocery shopping. That vulnerability imparts a humanizing quality, which is especially refreshing for a genre that often scares away timid listeners. While perhaps not a sure bet for widespread crossover appeal, Companion is indeed accessible, and at times even enlightening. Furthermore, it offers a welcome entry point for those interested in Burlington’s increasingly fascinating experimental-pop scene.