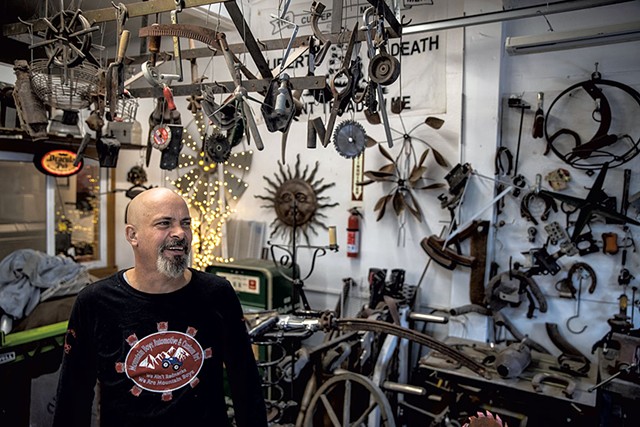 A pickup truck brought the day's first customer to Mountain Boyz Automotive & Custom Art in South Burlington on a gray Monday morning. The shop door opened, and proprietor Norm LaRock — who's lean, bald, tattooed and goateed — came outside and shook his hand.

"Hey, Norm," the customer said. "Think you can fix the rockers on my truck this month?"

"Yup, I can get to it," said LaRock, in an accent that revealed his native Vermont roots. His long-sleeve T-shirt sported his shop logo above the motto "We ain't rednecks. We are mountain boyz."

After they chatted some, LaRock greeted his other visitor, a reporter, and pointed out some of his metal works around the yard. They included his Toyota Tacoma pickup, which he'd outfitted, incongruously, with dual chrome stacks and metal skulls on the front grill. A rusted-out 2003 Subaru Outback had an equally incongruous snowplow welded on the front end. At the far end of the driveway, which is sandwiched between Vermont Gas and NorthCountry Federal Credit Union on Swift Street, stood a towering brown and tan metal giraffe.

"I like to fabricate things," LaRock explained, heading into his shop. "I do all kinds of stuff."

That much was obvious when we stepped inside. Along with the usual automotive accoutrements — work benches, tool chests, air compressor, spare tires — the garage contained an entire corner cluttered with hanging pieces of scrap metal and metallic sculptures in various stages of completion.

LaRock pays the bills by sanding rust off Vermonters' weather-beaten rides, but his real passion is fabricating artistic metal creatures. The Burlington-born auto-body expert, who has no formal art training, has become a prolific metal sculptor. LaRock's works, which he's exhibited at the South End Art Hop for the past three years, practically sell themselves.

Ask him about his metal creations, and LaRock will happily rattle on about them at the rapid-fire rate of an impact wrench.

"This is a souped-up witch's broom — like in Harry Potter," he said, pointing to a half-finished piece that will ultimately stand about five feet tall. The sculpture incorporates a hodge-podge of salvaged metal parts, including a chunk of minibike frame, a chrome muffler off a Harley-Davidson, a rusty sickle, the gear shifter from an old tractor and a pair of springs from a car suspension.

Across the garage, a table held the top half of a robot that LaRock had welded together using a sap bucket for its head. Nearby sat a snapping turtle that he was turning into a boot scrape. Beside that stood a miniature version of the metal giraffe out front that, LaRock suggested, could serve as a jewelry holder. Stacked in one corner were two auger blades large enough to sink telephone poles. LaRock said he plans to use them as the legs of a 15-foot-tall robot.

He said of art making: "It's fun because I get away from everything when I'm doing this, know what I mean? When your mind's on this, you're not worrying about bills or whatever."

LaRock's weathered hands are evidence of the decades he's spent working with metal. A few months ago, the 55-year-old had surgery on both wrists to correct years of carpal tunnel syndrome. "I can crush cans now!" he joked.

Though making sculpture came later, LaRock was virtually born to auto-body work. He grew up on North Street in Burlington's Old North End, where his uncle and father ran a repair shop in the backyard.

"When I was 12 years old, I helped [my dad] restore a Model A from the ground up," LaRock recalled. By 14, he was doing "practically everything" in the family's auto business. Though he dropped out of school young, his parents and uncle were strict enough with him and his cousin to keep the boys out of trouble, he noted.

"Neither one of us has ever been to jail or nothing. Clean records," LaRock said, nodding toward the Chittenden Regional Correctional Facility directly across the road. "Thank God for our parents."

LaRock moved to Florida at age 18 "just to see what it was like," then spent a year in New Hampshire before returning to Vermont. Over the years, he's worked for at least half of the auto-body shops in the Burlington area, he said, ticking off their names in rapid succession. 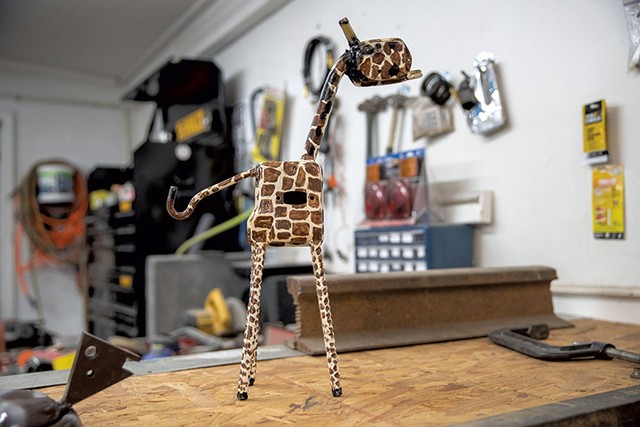 In his twenties, LaRock began making metal flowers out of old rotary saw blades. He estimated that he's sold or given away about 100 of those. Then he began crafting other objects: bumblebees, birds, caterpillars, dinosaurs. Once, he said, he made a robot modeled after the Bender character in the Fox cartoon "Futurama." LaRock claimed the piece sold 10 minutes after he finished it.

"Everything I use is recycled metal," he explained, describing the flea markets and scrapyards where he buys his supplies. "A lot of people, if you tell them it's for art, they ... drop the price. They're like, 'Oh, instead of $10, I want $2 for that bucket of horseshoes.'"

LaRock's move to his current location in June has been great for both sides of his business, he said. For years he ran his auto-body shop out of his house in Hinesburg at the end of a dirt road; few customers passed by.

Even there, though, the occasional automotive client would notice his creative wares and make a purchase. LaRock built several characters from The Wizard of Oz that proved popular, including flying monkeys and a waving Tin Man holding an ax.

About three years ago, LaRock walked into the S.P.A.C.E. Gallery on Burlington's Pine Street and asked owner Christy Mitchell if he could show some of his work there.

"He brought in a few pieces, and I knew immediately there'd be a market for them," recalled Mitchell, whose venue is all about cultivating new talent. LaRock's work was unique, she said, and his price point was right.

Mitchell, who attended high school in Alabama and art school in Georgia, said LaRock's pieces reminded her of the metal yard sculptures she would see while driving back roads in the rural South. That work was made by "outsider artists who are doing it because they have this innate passion for making," she said.

"You don't see a lot of that kind of thing around here," Mitchell added. "So I thought, I want to give this guy a shot."

Evidently, she wasn't the only one taken with LaRock's sculptures. His first year at Art Hop, in 2016, he immediately sold four pieces for $1,200 to a local art collector. This year, LaRock said, he brought 18 pieces to the annual event and came home with just three.

He likely would have sold them all, he noted, had he been able to accept credit cards — or to disassemble his sculptures. Four college girls really wanted his large metal giraffe, LaRock said, until they realized it wouldn't fit in the elevator of their dorm.

For now, LaRock's work may be affordable to the average art consumer — his smaller pieces often sell for less than $250 — but his prices are starting to climb. He's currently converting an old salvaged motorboat into a restaurant-style booth, complete with a ladder on the side, nautical running lights and a radio. One downtown Burlington restaurateur has already expressed interest in the work in progress. As LaRock said of his art career, "It's just blowing up right now."

But LaRock isn't ready to give up auto-body repair work yet. After all, the dual businesses have a symbiotic relationship.

"When he's selling his artwork, he's also talking to people about working on their cars," Mitchell noted. "So he's picked up new customers for rust repair while he's at Art Hop, and vice versa."

"Everyone's kind of amazed, because I only made it through the ninth grade," said LaRock. "But some people can't even change their oil, know what I mean?"