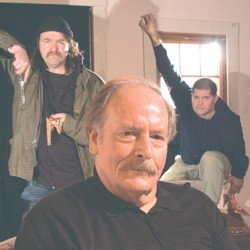 Good plays that became lousy movies make up a small corner of cinematic history’s “well-intentioned flops” section. The failure of these stage gems to translate to the silver screen testifies to theater’s unique power to communicate certain stories. Roger Ebert, reviewing the 1987 film adaptation of playwright Lyle Kessler’s Orphans (1983), explains, “On the stage, the play works as an exercise in human vitality, in which actors test their instruments.” He describes plays like Kessler’s as “concerts for voices and movement.”

Orphans’ intense three-person script, which unfolds on a one-room set, also throws performers and audience together into the claustrophobia of the characters’ lives. Burlington’s Off Center provides the perfect venue — intimate and gritty — for the darkly comic tale. Director Tara Lee Downs masterfully conducts Orphans as a raw, rambunctious concerto. She leads the same talented trio of local thespians — Dennis McSorley, Aaron Masi and John D. Alexander — who made beautiful, F-bomb-laden music together two years ago in David Mamet’s American Buffalo. Once again, the ensemble creates magic.

The “fucks” also fly fast and furious in the run-down North Philadelphia row house of brothers Treat (Alexander) and Phillip (Masi). Their father abandoned them and their mother died when Phillip was just a baby. Older brother Treat — still a kid himself — supported the orphaned duo by stealing. He fiercely guarded his “simple” little sibling from being taken by the state; biting social workers who tried apparently did the trick.

Without adult guidance, the now-grown men have created an odd family life. Treat overprotects Phillip zealously, keeping baby bro homebound by convincing him he’s “allergic to most everything” outside. When Treat walks in the door, the brothers resume playing a multiyear game of hide-and-seek. After Treat fills Phillip in on his workday of taking wallets and jewelry at knifepoint, Phillip details the street life he observes from the living-room window, as well as the day’s “fabulous prizes” on “The Price Is Right.”

One night, Treat brings back a much bigger score: a well-dressed, falling-down-drunk Chicago businessman named Harold (McSorley). Lucrative stocks and bonds in the victim’s briefcase lead Treat to hatch a grandiose plan to hold him for ransom. The enigmatic older man, however, soon manages to transform the situation, and all three men’s lives, into something none of them could have expected.

In Orphans, the action and dialogue roil with testosterone-fueled reactions, instincts and passions. Downs does a brilliant job orchestrating the story’s emotional ferocity as well as its physical violence. She also showcases the surprising amount of deliciously black humor in Kessler’s script, while allowing moving undercurrents of insights about family to emerge quietly.

McSorley is fantastic as Harold, anchoring the production with a cool, nuanced performance. He deftly portrays how Harold navigates different relationships with eager, needy Phillip and angry, volatile Treat. While the brothers are constantly in motion, McSorley’s Harold is catlike and cerebral. Thoughtful eyes and subtle facial movements convey how he observes and calculates. When kidnapped Harold is bound and gagged, McSorley can act only with his eyes. And he makes Harold’s “conversation” with Phillip — through duct tape — simply hilarious.

Masi draws the audience to Phillip by playing him with warmth and affection. The naïve, uneducated character could have become a caricatured simpleton, exploited for cheap laughs. But Masi captures Phillip’s gentle fascination with life, even from within his cramped world, and his earnest desire to form human connections. Hunched, hesitant body language gradually unfurls as Phillip’s knowledge and confidence begin to grow.

The dingy living-room set perfectly reflects the dour confinement of the brothers’ grim world. Although actor Mark Roberts has substantial backstage technical experience, this show is his promising debut as scenic designer. On a low budget of “no budget,” according to Downs, Roberts cleverly furnished the set with Treat’s Dumpster finds, such as discarded milk crates and a filthy floral couch sprouting rusty springs.

The doors, stairs and window all function solidly, sounding real when the actors use them. When this important detail gets overlooked, the artificiality can sidetrack the storytelling.

On opening night, there seemed to be a few timing glitches with lighting cues. But overall, Jeffrey E. Salzberg’s design illuminates Roberts’ set well. Particularly enjoyable — and realistic — is the spectral glow cast on Phillip as a small TV transfixes him.

The production marks the last chance to see this ensemble work together locally. Downs and Alexander are decamping for the Big Apple later this year. So what I said about American Buffalo — don’t miss it! — applies to Orphans, with a poignant twist. The Three Men on a Buffalo herd disbands at the end of this run, leaving only hoofprints behind in our memories.

Orphans, directed by Tara Lee Downs, produced by Three Men on a Buffalo. Off Center for the Dramatic Arts, Burlington. Wednesday through Saturday, March 16 through 19 and 23 through 26, at 7:30 p.m. $20. flynntix.org