Capoeira Packs a Punch With Dance, Music and Martial Arts 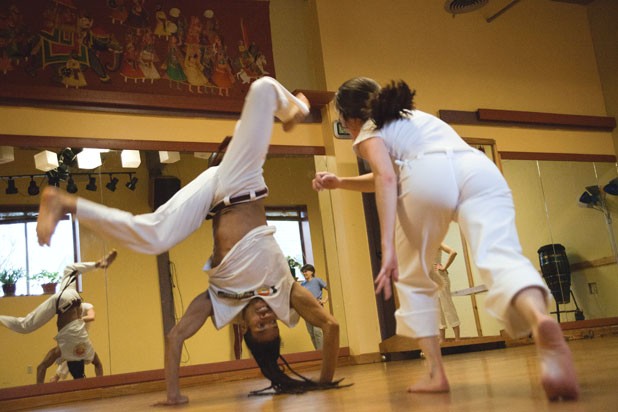 Before you can learn capoeira in Fabio “Fua” Nascimento’s class, you have to learn a little Portuguese. At the beginning of each session, he passes out instruments — a drum, a cowbell, a tambourine — and tells his students to repeat after him, his big voice soaring: A maré tá cheia ioio, or “The tide is high.”

Briefly, it feels like a sing-along rather than a martial-arts class. But within minutes the instruments are set down, and participants are lunging across the floor — kicking, jumping, back bending, ducking and, eventually, contorting their bodies into a kind of backward cartwheel.

The surprising intersection of music, singing, dancing and fighting is unique to capoeira. The Brazilian “fight-dance” can be traced back to the 1600s, when landowners, faced with an increasing number of runaway slaves, allowed their African workers to dance and practice their religion twice a month. What the slaves created was a sly martial art, characterized by rhythm and fluid movement — and dressed up as a dance.

And, as I found out at Nascimento’s class at Burlington’s North End Studios, it’s one hell of a workout. Near the beginning, capoeira felt like yoga, with long, deep stretches on the floor. Around the middle, it felt like break dancing — all crouching and side-to-side weight shifts. By the end, when we began pairing off and improvising “fights,” I was a sweaty, blistery mess.

Before wrapping up, Nascimento drew us all into a tight group hug and asked us to breathe together. The seven of us leaned in close, and I watched as beads of sweat rolled off one student’s head and onto the floor. Finally, Nascimento told us all to stick out our tongues and roar. “Like lions,” he instructed with a big smile.

Nascimento, a dreadlocked 32-year-old with a dancer’s body and a flirtatious grin, has been practicing capoeira since he was 8. “I grew up in a really poor area in Saõ Paulo, really poor,” he says. As a kid, he watched his capoeira-master uncle train. But Nascimento’s father disapproved of the African religions intertwined with the martial art. “He knew one thing was related to the other. He said that he would be very happy if I did kung fu, or something that would not bring me there,” Nascimento says. “I tried everything, but, you know, they just don’t have the same … thing.”

So he began taking capoeira classes with friends from school — and was immediately hooked. For one thing, Nascimento was really good at it. “In the second month, I was already in the same level as people who were doing it a year and a half,” he says. He couldn’t stop thinking about it. “I wanted to learn everything,” Nascimento says.

At the same time, doing capoeira was building his self-esteem. “In the middle of the ’90s, the black movement made a transformation in Brazil, but in my childhood, the beautiful guys were always the blond ones, blue eyes,” says Nascimento. “Every year the girls made a list of the 10 most beautiful guys in the class, and I never made it.”

At 17, he began teaching capoeira in Saõ Paulo. “It was my first contact with other socioeconomic realities,” he says. And it introduced him to the larger capoeira community, of which he desperately wanted to be a part.

For some people, capoeira is a martial art designed for real fighting — most Brazilian ultimate fighters were trained in the technique. But Nascimento says that isn’t his thing. “I’m a peaceful person,” he says. “For me, it’s much more about self-awareness. I like the game of it, too — put down, jump over. When it becomes violent but it’s still beautiful to watch, this is still my style. But if there’s no rhythm in the body anymore, it turns me off.”

Determined to find a master with whom to train, Nascimento began traveling throughout Brazil, teaching and working odd jobs, including one as an armed bouncer at a swanky club. “No fights on my watch,” he quips.

After several years, he returned to Saõ Paulo and saw Aberré, one of Brazil’s most recognized masters, playing capoeira. (Nascimento uses the word “playing” to describe two people engaging in the martial art.) That’s my master, Nascimento recalls thinking, and they began to work together.

A few years of training, teaching, modeling gigs and dinner-theater performances later, he met his now-wife, Kaitlyn O’Donnell, a Vermont dancer and translator, in a Saõ Paulo capoeira class. He moved with her to Montpelier in 2009.

These days, Nascimento juggles several teaching gigs — at Contemporary Dance and Fitness Studio in Montpelier, North End Studios in Burlington and Dartmouth College in Hanover, N.H. — along with his job as a para-educator at Randolph Elementary School. This summer, he’ll teach capoeira at the Middlebury Language Schools, and he plans to start an after-school program in East Montpelier.

Hard work is a way of life for Nascimento. He had his first job at 12, working the night shift at his dad’s factory. “The worst part was, no salary,” he says. “The deal was, you want to live here, you have to pay something.”

Nascimento hated his time in the factory, but it’s evident in his capoeira class that teaching comes naturally to him. “Everything can be taught, as long as you have respect,” he says.

One of his Burlington students, Morella Devost, has been taking capoeira classes for a little shy of two years. A swimmer growing up, and a rugby player in college, the 39-year-old pretty much limited her workouts to a gym routine until she discovered Nascimento’s class.

“At first, you just feel so lost,” she says. “But every time, at the end of each class, I’d always end up feeling like Oh, my God, that was so much fun!”

A nutritionist and hypnotherapist, Devost takes a holistic approach to the activity. She’s not in it to become a master; she just wants to be part of the community and work on a few personal goals. “I want to get really good at my handstands. I want to get more flexible so my kicks are better,” she says. “When you fall in love with a sport, you just want to do it because it feels good.”

And because you have a cool teacher like Nascimento?

“I love him,” Devost gushes. “You know why? He’s been doing capoeira since he was a little kid. He’s really advanced. And he’s just so humble and friendly.”

Nascimento won over Justina Mahler, too. Another of his Burlington students, 29-year-old Mahler hadn’t heard of capoeira until she caught a demonstration he gave at a multicultural festival in Essex two years ago. “I’d always wanted to learn a martial art, and capoeira seemed to have enough personality to help me through the process of learning it,” Mahler says. She stuck with it and now takes classes in Montpelier and Burlington.

“Fua invites you to move outside your comfort zone, which is enough of a challenge for me to keep trying without getting frustrated,” she says.

Once a month, Nascimento’s students get together to celebrate. They bring food, sing songs and play capoeira into the wee hours. It’s that sense of community that has kept a core group of about 10 coming back for nearly two years. “There’s this inner circle,” says Devost. “It feels like family.”

The original print headline for this article is “Kick Starter: A Burlington capoeira class packs a punch with dance, music and martial arts”