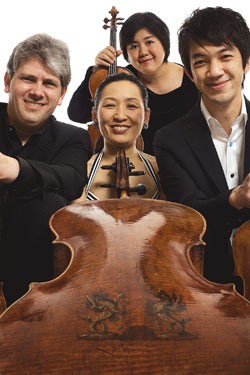 This “before party,” as Kevra calls it, anticipated the culminating musical event of CCC’s season: the premiere this Saturday of a Middle Eastern-flavored work Kevra commissioned from Fairouz, called “Teta.” The piece is written for solo flute and string quartet and will be performed by Kevra and the superb Borromeo String Quartet, which will fill out the program with pieces by Beethoven and Dvo?ák.

Kevra first learned of Fairouz through the Borromeo, whose members played a piece by the composer at their CCC concert two years ago. At the time, Kevra’s Lebanese-Egyptian mother was dying; she passed away in December 2010. Kevra had also begun to claim her ethnic heritage more openly. She envisioned a commission that would both memorialize her mother and celebrate her Arabic ethnicity, and Fairouz seemed the perfect match — and not just because “he looks like one of my relatives,” as she puts it.

Kevra is from New Jersey; Fairouz was born in New York. Both had grandparents of Middle East origin. Though Kevra, 49, has never traveled to that part of the world, she experienced her heritage through language and food. She remembers listening to her Lebanese grandfather speaking by phone in Arabic with his sister, who had remained in Beirut. At Fairouz’ request, Kevra emailed him such recollections, as well as photographs and memorabilia, during the composition process. The two soon realized they shared similar experiences.

Fairouz’ grandmother emigrated from Jerusalem, where she had lived when it was still a Palestinian city. The 27-year-old composer sees her displacement in the context of his own extensive travels in the Middle East and his research on historical immigration patterns among Arabic peoples. He says it’s hard for Arab Americans to specify their families’ origins because, “when you’re a few generations removed, you’re dealing with countries that no longer exist. Syria used to contain Lebanon, for example.”

With his grandmother and Kevra’s mother in mind, Fairouz titled the CCC commission “Teta,” after the Arab word for grandmother. The piece is a tribute to Arab women, and grandmothers in particular, as purveyors of the cultural heritage from one generation to the next. In the course of composing, Fairouz says, it also became a piece about the Arabic immigrant experience as a whole, especially during the decades surrounding the start of the 20th century, when new arrivals didn’t have the luxury of returning home.

Fairouz’ music often aims for social and historical critique. His “Tahrir” concerto addressed the Egyptian uprising, and his opera Sumeida’s Song concerns the practice of revenge killing. His fourth symphony, In the Shadow of No Towers, which premiered at Carnegie Hall last month, is based on Art Spiegelman’s graphic novel of the same name. Fairouz meant the piece to question “the gross exaggeration of our differences at the expense of our shared humanity” during the post-9/11 decade.

One difference that sets Fairouz apart is worth mentioning: Inspired by the Arabic art of calligraphy, he composes by hand in pencil — a method that’s been practically eliminated by musical-notation software.

Fairouz’ music, however, is immediately accessible and powerfully communicative. It can be soaring, delicate or deeply moving, and it often blends maqam, the Arabic folk mode, with Western forms. Samples can be heard in two brief spots recently produced by the BBC (available on YouTube), which featured him in Collaboration Culture, a project that pairs 14 artists from around the world on new collaborative works. Fairouz chose to write a piece for Bollywood star Shakti Mohan to dance.

“I’m always trying to do something I haven’t done before,” he explains.

“Teta” fits that mold. “It’s my first major piece for flute,” says the composer. In three movements, played without pause, the piece moves from maqam melodies conveying nostalgia for a culture that’s been left behind — “parties in Jersey with Arabic food and all that stuff” — to a darker, “very emotional” central movement, to an optimistic final movement that takes the quintessentially Western form of the fugue. The contrapuntal form of the last movement, he says, is about “assimilating without losing your own sense of identity.

“You’ve started out in a very Arabic world,” he continues, “and by the end, you’re in a Teutonic one — Bach is the master of the fugue. It mirrors the journey from Arabic to American, and synthesizes the two.”

The Borromeo String Quartet and flutist Karen Kevra perform “Teta” by Mohammed Fairouz at the Unitarian Church of Montpelier on Saturday, April 27, at 7:30 p.m. $10-$25. capitalcityconcerts.org