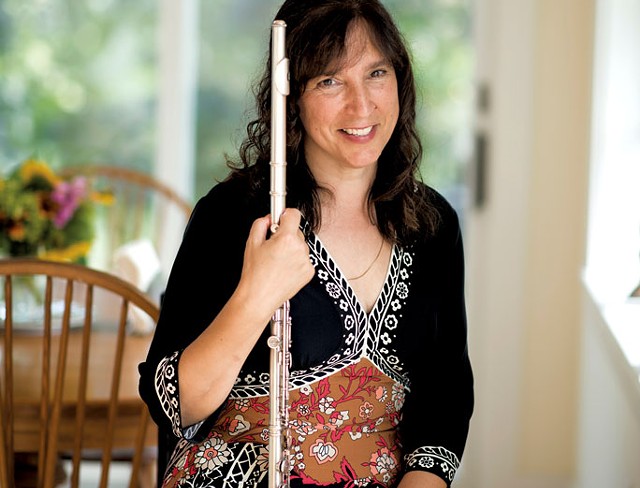 Now that the rich offerings of summer chamber music have ended, classical fans can pencil in a new round of chamber concerts from Capital City Concerts.

Founded in Montpelier in 2000 by flutist Karen Kevra, CCC has presented repeat concerts in Burlington and Rutland venues in recent years. Now a Cornwall resident, Kevra is bringing the series to the Middlebury area for a test run. Three of this season's five concerts will be performed at both the Unitarian Church of Montpelier and the Champlain Valley Unitarian Universalist Society in Middlebury.

Kevra's programming is distinctive, and not just because works for flute appear on each program. She also mixes local musicians, such as pianist Paul Orgel of Shelburne and Craftsbury's Rowell sisters — Mary on violin and Fran on cello — with visiting musicians from New York and Washington, D.C. Kevra houses the traveling musicians and cooks elaborate homemade meals for all. On this year's docket are the Taiwanese American Formosa Quartet performing György Ligeti; and the New York-based pianist-cellist couple Jeewon Park and Edward Aaron, both Shostakovich experts.

The Ligeti — the Romanian composer's first string quartet — opens the program of one of the three repeated concerts. Inspired by the music of Ligeti's fellow countryman Béla Bartók, the work is subtitled Métamorphoses Nocturnes. It indeed evokes a night that morphs from haunting to otherworldly.

Kevra first heard Formosa perform the 1954 piece during a turn as director of the concert series Summer Music From Greensboro; she was "riveted." Says Kevra, "When you hear modern music for the first time, you either (a) don't like it, or (b) think, Maybe I'll warm to it on a second hearing. But this had an immediacy to it, a cinematic quality." The Ligeti establishes the theme for the March concert, called "Night," which also includes Orgel playing Chopin and Britten nocturnes.

The season-opening concerts this weekend, titled "The Dove and the Hawk," bring together five works about peace and war, including a reprise of the flutist's 2013 commission, Teta by Mohammed Fairouz. The title means "grandmother," and the piece honors the Middle Eastern heritage that Fairouz and Kevra share, as well as their Arabic grandmothers.

As CCC's artistic director, Kevra occasionally leaves the programming to musicians. A fan of violinist Laurie Smukler, who is on the faculty at the Juilliard School, Kevra invited her to Vermont for the final concert in May. Smukler has programmed a Brahms sextet, a Mozart flute quartet and Schoenberg's Verklärte Nacht, and will bring along the musicians with whom she's chosen to play.

Otherwise, Kevra says, "We put together concerts really just for our audience." As a result, the musicians "absolutely have the feeling that they're playing for the home crowd. And they love it."