Canvasworks Designs Makes Artwork You Can Walk On 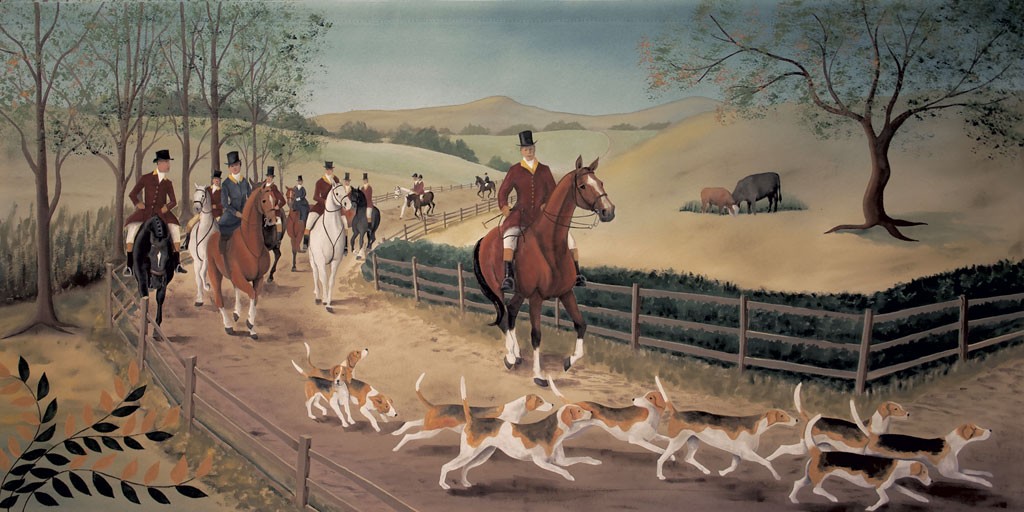 Lisa Curry Mair has painted murals, her husband's vintage canoe and worn-out horse saddles. "Basically, if it's not moving, I paint it," she said on a recent morning at her Weathersfield home. Her artistic bread and butter is also her least conventional surface: the floor.

For more than 20 years, the Massachusetts transplant has cultivated a successful niche designing and painting floorcloths through her company, Canvasworks Designs.

Floorcloths are both decorative artworks and functional objects. Though they date back to 15th-century France, in America they reached peak popularity in the mid-19th century. Used in place of a rug, floorcloths were highly durable paintings on thick canvas that could be found in middle-class and upscale homes of the era. With the invention of linoleum in 1869, floorcloths eventually went the way of the horse-drawn carriage.

In the 21st century, however, they're again in hot demand. As one of only 12 or so American artists producing floorcloths, 56-year-old Mair is busy; currently, her painting schedule is booked through November.

Most of Mair's clients "want to represent their house in a previous time," she explained. Often, the early stages of a commission will involve a trip or two to the historical society in a client's hometown, where Mair will glean era-appropriate details to include in her scenes — such as town landmarks and architectural detail. As an avid fan of history and historical research, she finds seeking out this kind of detail a pleasure.

Mair's style is distinctly folk, and she uses a warm, subdued palette. Some of her strongest influences are 18th-century painters John Carwitham, Rufus Porter and George Stubbs, as well as 19th-century painter Alfred Munnings.

On her floorcloths, Mair often paints pastoral landscapes, both real and invented, as well as the traditionally elite pastime of fox hunting. "I love doing the hunt scenes," she said. "My mother was an avid fox hunter. It's beautiful."

Riding and dressage are among Mair's lifelong passions, and horses figure prominently in her work. Her own horse, Kate, is a favorite model. Two of the artist's staircases — one in her studio, the other in her adjacent home — are adorned with portraits on canvas of the dozen horses she's had in her life so far.

In college, Mair majored in math and minored in art. She initially set out to be a children's book illustrator but was discouraged by how grueling and competitive it is. Though Mair had always painted, it wasn't until she attended a craft show in 1993 that she stumbled upon her specialty.

Mair's very first floorcloth was a 30-by-45-inch piece featuring a swirl of artichokes, eggplants and asparagus. When friends saw the work in her home, they began to request floorcloths of their own. And so her career began.

Recently, Mair completed floorcloth No. 1,182. The majority of her clients have been in the U.S., particularly from the South. She has also shipped work to France, England and South America. Today, Mair orders her heavyweight canvas by the 100-yard bolt, which weighs 600 pounds. A standard floorcloth is eight by 10 feet.

"Everything I do is done on canvas," Mair said. "That's one of my signatures."

This includes her murals. Though interior wall paintings don't require the same canvas or exterior-grade acrylic as a painting made for the floor, Mair has found she prefers using those materials. "It's weird, I know," she admitted.

In addition to custom designs for residences, Mair has collaborated with many museums and historical institutions. In 2010, she completed a floorcloth for the Boston Museum of Fine Arts' Art of the Americas wing, which featured Carwitham's dimensional geometric "Tumbling Blocks" design.

"I like doing [museum work]," Mair said, "because I feel like I'm preserving history a little bit."

Her love for the past extends beyond her artistry. The home she shares with her husband is more than 200 years old and formerly belonged to landscape painter H. Thomas Clark. Mair keeps Clark close to heart and, she said, has worked to "put [the house] back to the way Tom would have had it." Former owners had turned Clark's original studio space into an apartment; Mair has converted it back into a workspace.

These days, Mair is working to build her reputation beyond floorcloths. To keep creatively nimble, she has begun a weekly practice of producing smaller paintings. Online buyers have quickly snatched these up. In fact, Mair said she worries about having enough of them for her first-ever solo exhibition — in September at the Arundel Farm Gallery in Kennebunkport, Maine.

Vermonters can find samples of Mair's paintings at the Inn at Weathersfield, where they contribute to the farm-to-table restaurant's rustic charm. In addition to six small-scale, wall-hung works, the inn also has a custom floorcloth featuring a mariner's compass at its entrance — and, yes, you're supposed to walk on it.

The original print version of this article was headlined "Positively Floored"

Speaking of Canvasworks Designs, The Inn At Weathersfield