Canoeing Out to Burton Island Bistro for Burgers and BLTs 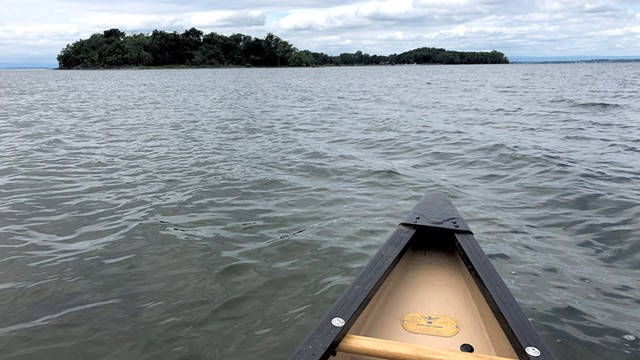 When I head out in my canoe, it's usually chock-full of supplies. Paddling becomes a precarious balancing act; I kneel instead of sitting so that I don't tip and lose my beer cooler, bug spray, tent or bag of snacks. But as I pushed off from Kill Kare State Park in my bright red Nova Craft on an early July morning, I only packed my wallet. All that stood between me and lunch was a 20-minute paddle.

I was headed for Burton Island, a 253-acre state park in Lake Champlain, just off the southwestern tip of St. Albans Point. The island is accessible by ferry — the Island Runner shuttles people and bikes between Kill Kare and Burton Island several times a day — but my two canoeing companions and I decided to make a real adventure of it.

According to the Vermont State Parks website, when Burton Island State Park opened in 1964, "original plans to build a causeway were abandoned for the unique appeal of an island campground without cars." And the park is certainly appealing. Reservations for the island's campsites open 11 months in advance and book quickly.

"Once you come to this island, you realize what a great little escape it is." Juanita Manley tweet this

As day-trippers, we were looking for lunch at Burton Island Bistro, a brown building tucked back among the trees overlooking the marina. Part general store, part breakfast-and-lunch restaurant, it is the island's unofficial downtown. Unlike at many state parks, where the bare-bones offerings don't go much beyond firewood, the shelves here are stocked with everything from sunscreen and bug spray to s'mores fixings and beer — and you can order a garden-fresh meal.

It hasn't always been this way, said bistro proprietor Juanita Manley. When her island adventure began, "They sold ice," she said with a laugh. 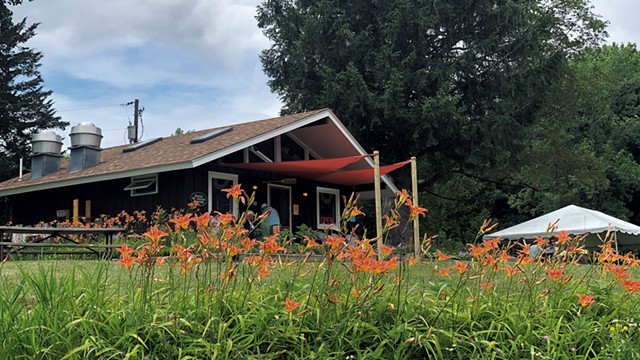 Manley was working at a restaurant in St. Albans, where she lives, and one of the other employees happened to be running the store on Burton Island. "He asked me if I could make a couple of salads," she said. Manley agreed. Soon after, he asked if she could come over and work for the day. Next, he asked if she would do the ordering.

"Then I was basically running it," Manley explained. "And when he got done, I took it over." This is her 25th year in charge of the business — a milestone that would have occurred in 2020, but the bistro was closed due to the pandemic and Manley had her first summer off.

She's built up the biz over the years. In the early days, she worked in a smaller building with just a little griddle to cook breakfast on. Now in a larger space, she has a full kitchen with a hood system.

"I think about people's needs. That's it," Manley said. "And things to have fun with. People don't have time to relax, so when they're camping, that's what they should be doing."

Campers often forget the fun stuff when packing their gear for the trek across the lake to Burton Island, she said. But not to worry — the bistro sells fishing poles, Frisbees and cribbage boards to help pass the time. Artists can pick up a sketchbook and the medium of their choice: watercolors, pastels or crayons. There's even an Astroturf rug for next-level campsite comfort. 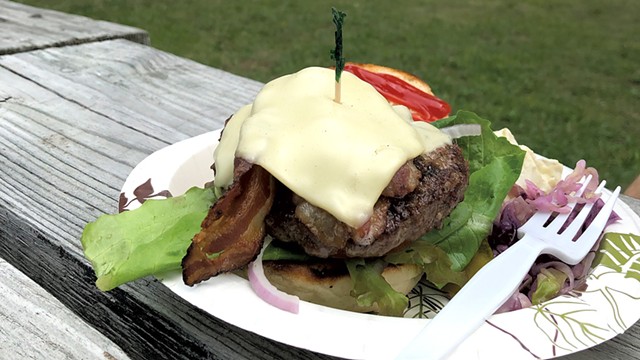 The bistro serves breakfast and lunch seven days a week, all summer long. The fare isn't fancy, but it's made-to-order and full of fresh herbs and vegetables from Manley's own garden.

"Really, this is just a concession stand," she said modestly. "We called it a bistro because we wanted more people to come. Sometimes people are disappointed that this is it, but then when they get their food, they're happy."

Whether it was the work of paddling in the lake or the anxiety of each choppy wave coming our way, my canoeing companions and I had built up an appetite on our short excursion, and the bistro served exactly what we were after.

The lunch menu consists of summertime classics: burgers, hot dogs, grilled cheeses and veggie patties made in-house. Manley, a graduate of the New England Culinary Institute, likes to get creative with the specials; on the Fourth of July, she offered a lobster omelette and a breakfast sandwich with grilled pineapple and rainbow and jalapeño peppers.

I ordered the "BLT made with TLC" ($8.99) and grabbed a lemonade and a container of watermelon chunks from the cooler. My fellow explorers both opted for a cheeseburger ($13.99). One got a soda; the other, a cold tallboy of local beer.

We claimed a bench on the porch to wait for our food. There we gazed at the flower- and herb-filled garden out front and watched kids zip by on bikes, unworried about traffic. A steady stream of customers headed through the shop's screen door. More than once, we heard someone say, "I'm so glad they're back this year."

Soon our order was up, and we went back inside to pick up our paper plates full of food from the open kitchen. We carried them out to the many picnic tables that dot the lawn, choosing one in the sunshine with a view past the ferry landing out to the lake.

Each of the meals came with a pickle and two rotating side salads — coleslaw and potato salad that day. The burgers were large enough to test the strength of the paper plates.

My BLT was made with TLC, as promised: The thick slices of bread were perfectly toasted and slathered with mayo, the bacon was crispy, and the proportions were spot-on. The lettuce came from Manley's home garden — like everything else for the bistro, she'd brought it over on the ferry.

After lunch, my paddling companions and I wandered past the horseshoe pit and through the disc golf course on a path to the southern tip of the island. We veered off-route to explore a nature trail, passing through junglelike trees and watching birds flutter through a wetland area before we scurried down a bank to a rocky beach.

We hardly saw another soul, aside from the birds and a snake sunning itself on a rock. The island has been quiet this year without its regular influx of Canadian tourists, Manley said. But running the business keeps her busy, and she doesn't spend a lot of time wandering around Burton Island. When she finds a moment to sneak away, her favorite spot is near the dog park.

"The water there is really peaceful," she said. "Once you come to this island, you realize what a great little escape it is."

We didn't make it to the dog park and instead bushwhacked until we found a path back to the bistro and our boats. I contemplated buying an ice cream sandwich or a bottle of wine for the trip back but quickly realized my canoe copilot would prefer if I focused on paddling. We strapped on our life jackets and pushed off from shore, full and relaxed after a day on the island.

The trip back was easier, thanks to fewer big boats and calmer water, and we arrived in just 15 minutes. But I think I'll take the ferry next time I head to Burton Island. Since I missed breakfast, there will definitely be a next time.

The original print version of this article was headlined "For Shore"