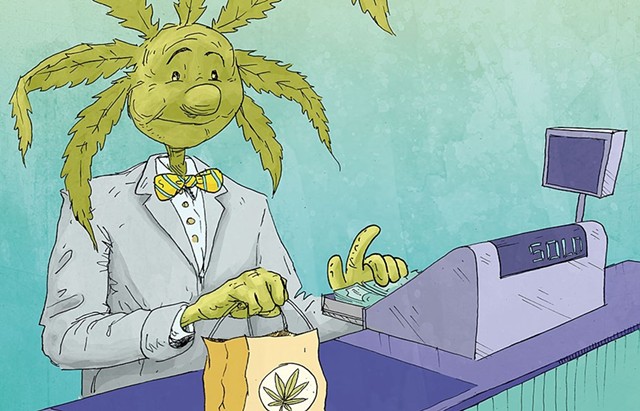 The Vermont Cannabis Control Board has granted three licenses to Burlington retailers and has applications for six more pending — a situation the board's chair called "concerning" during a public meeting on Wednesday.


"Anyone who is thinking about getting a retail license should really consider what the population base is, what the customer base is, and how they intend to compete with — if you're thinking about Burlington — nine other locations that are kind of in a very small radius," board chair James Pepper said.


"If this were Liquor and Lottery, they would not grant nine liquor store licenses to one town, even if it was Burlington," he said, referring to the state department that regulates booze sales.


In an interview later on Wednesday, Pepper said he worried that some of the Burlington shops won't survive. Cannabis businesses don't have Chapter 11 bankruptcy protections if they fail, since the industry is not legal in the eyes of the federal government.

"All these folks that are applying don't have access to traditional sources of capital," Pepper said. "And so a lot of these people are putting up their own money, their friends' money, their family's money. They're doing whatever they can to scrape together enough money to open one of these places ... So the stakes are much higher in this industry than any other."

Act 164, the 2020 law that legalized retail cannabis sales in Vermont, did not include caps on license types, except for integrated licenses, which were available only to the three companies that hold medical marijuana licenses. And the control board does not have the ability to reject applicants based on the town they want to operate in, Pepper explained in an interview. Rather, the board would need to close the application window for all retailers across the state, something it does not intend to do in the near future, Pepper said.

But the board could at some point, Pepper said, noting that there are 79 liquor stores in Vermont.

"Is that the carrying capacity for these kind of 'vice' stores?" Pepper asked. "It's hard for us to set an arbitrary cap. What do we base it on? How do we really know?" 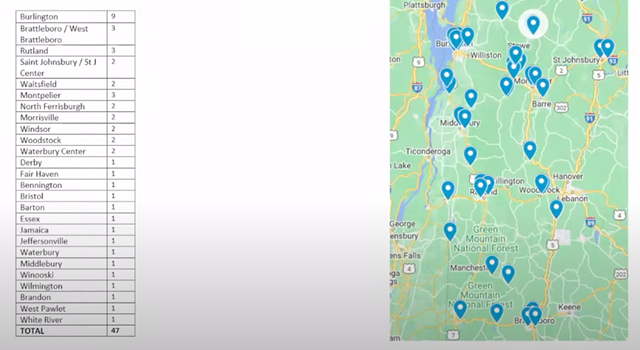 As of October 18, the board had received 47 retail applications. The board's executive director, Brynn Hare, made a map of where the applicants planned to open and listed the towns. Pepper said, aside from Burlington, the distribution appeared "pretty decent."


"I do want people to go into this clear-eyed and and know what their competition is going to look like to the extent that we can provide that," Pepper said.

Behind Burlington were three communities with three retail applicants each: Brattleboro/West Brattleboro, Rutland and Montpelier.

The Queen City boasts a population of nearly 45,000 people, though that figure would swell to about 100,000 on pre-pandemic weekdays. There's also a large student population in Burlington, and many of the store owners are banking on selling to tourists. Customers must be 21 years or older to purchase cannabis.

Cannapreneurs and Town Governments Are Still Hashing Out Local Regulation
By Chelsea Edgar
Politics
The two stores currently open in Burlington — Ceres Collaborative, at 190 College Street, and Green State Dispensary, at 699 Pine Street — are about one and a half miles apart. Grass Queen, which earned the board's approval on Wednesday, plans to open at 71 South Union Street, about a five-minute walk from Ceres.

Ceres — which on October 1 became the first store to open in Burlington — averaged more than 500 daily sales during its first 10 days, the company's CEO, Russ Todia, said earlier this month. He described the early rush as the likely "peak" of demand.

"What we're seeing today we know won't be the same in December," Todia said. "But how different will it look in March?"

Vermonters Celebrate the First Day of Legal Cannabis Sales
By Sasha Goldstein, Derek Brouwer and Chelsea Edgar
News
He anticipated that as more stores open, customers will decide which one or two they prefer.


"I feel like everyone's got to kind of make that decision like they do with restaurants or anything else," Todia said. "I don't know how promiscuous people will be."

In 2021, Burlington voters approved "opting-in" to cannabis sales, meaning stores can open in the city. And the city recently created a local cannabis control board that can review applications for weed businesses. But the board, which is made up of the city's councilors, has few powers and cannot limit the number of cannabis shops that open.

Burlington City Council Green-Lights Four Cannabis Businesses
By Courtney Lamdin
News
"I expect as this moves forward there's going to be some frustration at the local level about the constraints that the state has placed on municipalities on  reasonable restrictions and regulations they can place on these businesses," City Councilor Ben Traverse (D-Ward 5) said on Wednesday.

Traverse said he thinks Burlington was right to opt-in to cannabis sales. But he said the state requires the city to treat cannabis shops the same as any other retail business.


"That provides us a lot less regulatory authority than we [have] over liquor establishments," Traverse said.