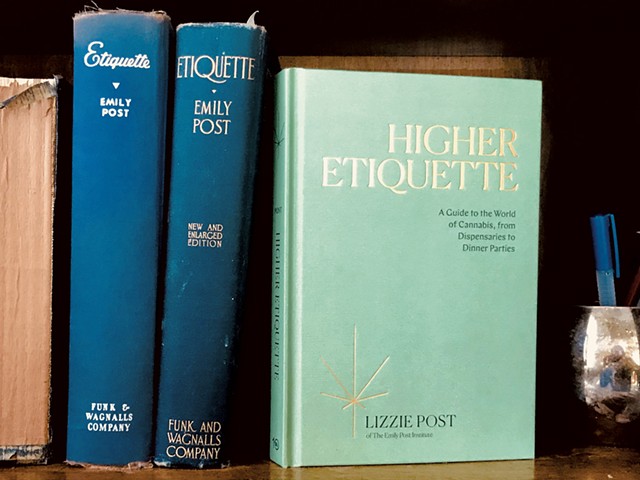 Since Emily Post published her first book on etiquette in 1922, her name has been synonymous with manners. Etiquette in Society, in Business, in Politics, and at Home is now in its 19th edition and remains the gold standard for the best behaviors in a civilized society. Likewise, the Emily Post Institute, which the New York City author and socialite founded in 1946, is still the country's foremost arbiter of propriety.

While Post died in 1960, her descendants have carried on the family business from the institute's Burlington offices, using books, blog posts and podcasts to rule on matters ranging from elegant table settings to wedding decorum to polite smartphone usage. Yet their latest offering might have fans asking, in the nicest possible way, what the folks at the venerable Post Institute have been smoking.

March saw the release of a book by Post's great-great-granddaughter, Lizzie Post: Higher Etiquette: A Guide to the World of Cannabis, From Dispensaries to Dinner Parties. Like other publications under the Post Institute banner, it's a guide intended to help readers navigate tricky social situations. But the society referenced in this book is "high" in a whole new sense.

Lizzie's book, the sixth she's authored or coauthored for the institute in her 12-year tenure, offers advice on a broad range of cannabis-related topics, including how to pass a joint around a circle, how to behave in a dispensary and the best tactics for dealing with a weed-mooching friend. (Turn to Seven Days' advice column, Ask the Reverend, for a take on that last issue.)

While some might struggle to reconcile cannabis and manners, Lizzie doesn't see any incongruity. Quite the opposite.

"Etiquette, from an Emily Post perspective, is about treating people with consideration and respect and honesty," the 36-year-old explained. "Good etiquette is about building positive interactions with one another. That, I think, really does carry throughout cannabis culture.

"A lot of people want you to have a good time with this plant; they're happy to share," she continued. "And that kind of spirit is really connected between the two subjects."

Higher Etiquette is a quick, fun read. Like her great-great-grandma, Lizzie writes with a deft touch, striking a balance between humor and insight. That's impressive, given how much information the book imparts. Over 166 pages, she makes a compelling case for moving beyond stoner stereotypes.

"When we think about pot and think, It's so not etiquette, that's one really standard stereotype," Lizzie said. "But all types of our population are engaged with this plant. So what I'm really excited about with this book is helping to break the stigmas around cannabis."

As legalization spreads around the country and cannabis culture enters the mainstream, that's a worthy and perhaps commercially savvy goal. But Lizzie had to convince her family of its validity.

"It's a whole new area of thought for us, of etiquette," said Lizzie's father, Peter Post. He edited the book with his wife, Tricia Post, and until recently was the managing director of the Post Institute. Now, Lizzie and cousin Daniel Post Senning run the institute as copresidents.

Peter recalled that, when his daughter pitched a book about weed etiquette a year and a half ago, some members of the Post clan were skeptical.

"There was some reticence among my brothers and sisters as to whether this is what Emily Post ought to be doing, but Lizzie really pushed it," said Peter. For his part, he believes his great-grandmother would approve.

"It's no different to me than Emily Post writing about alcohol and over-imbibing and how to deal with it," explained Peter. "She was a teetotaler; she didn't drink. But she recognized that that was part of society and she needed to be able to address those questions. This is part of society, too.

"It's not a function of whether smoking pot is right or wrong," Peter continued. "If it's out there, and people are going to be using it, the question is: How do we interact with each other when we do use it?

"And that's what etiquette is about," he said. "Etiquette is about how we interact with each other in all kinds of situations. It's drinking; it's somebody who wants to have a cigarette; it's anything."

"I was not the prim and proper child one might imagine would aspire to be an Emily Post etiquette expert," she revealed with a chuckle. "I believe the term 'fresh' was applied frequently."

Lizzie grew up in Charlotte and attended the University of Vermont, where she graduated with a BS in art education. She said she had no intention of joining her parents and sister at the institute — until the day in her junior year when her father summoned her to his office.

"I thought I was getting called in because I'd overdrawn a bank account or something," she recalled.

Instead, Peter and his siblings wanted to tell her about a gap they'd identified in the institute's roster of advice, one they thought she could help fill.

"[The institute's advice] went from high school or college graduation right to getting married, and that's just not how people live these days," said Lizzie. "There's a good decade in between for a lot of people."

That realization led to Lizzie's first book for the institute, How Do You Work This Life Thing? Published in 2007, the book was aimed at twentysomethings navigating independence for the first time. It tackled seemingly un-Post-like topics such as messy roommates, deadbeat friends and malingering couch surfers.

Lizzie hasn't looked back since. She's a coauthor of the 18th and 19th editions of Etiquette, as well as the third edition of The Etiquette Advantage in Business: Personal Skills for Professional Success. She also coauthored two books with her sister, Anna Post: Emily Post's Wedding Etiquette 6th Edition and Emily Post's Great Get-Togethers: Casual Gatherings and Elegant Parties at Home.

"When you're out there writing for the family, you kind of join forces on a lot of different things," Lizzie said.

Higher Etiquette, by contrast, was largely a solo endeavor. The publisher fast-tracked the book, meaning Lizzie had only about five months to research and write it. She traveled to Colorado, Oregon and California to meet with growers, legal experts and others in the cannabis field. In the process, she learned about everything from the science of THC — a topic that occupies a significant chunk of the book — to weed-enhanced yoga to paint-and-puff classes. Anecdotes from candid conversations she had during her research found their way into the book, along with many hours of formal phone interviews.

"It helped paint this great picture," Lizzie said, "because I talked with everyone about their expertise, and then just about cannabis in their life."

As an example, she recalled talking with a lawyer who had taken his mother to a cannabis education class. "She was surprised at how many women were there," Lizzie recalled. "She didn't realize cannabis would be a female-connecting thing."

Connections of all kinds provide the philosophical framework for Higher Etiquette. They inform every bit of advice Lizzie offers, whether she's outlining the most sanitary ways to share a bowl or vape pen, discussing how to talk to kids about cannabis — and the best protocol for consuming around minors — or suggesting respectful ways to indulge around friends who pass on grass.

"What's really important is to give people the tools to interact in a positive way so that they build relationships rather than hurt them," Peter said, "because that's really what etiquette is all about."

One way in which Higher Etiquette succeeds in connecting people is by catering to high and low culture and everything in between.

"The people I've met who put on cannabis dinner parties, they're doing it with gourmet chefs, and they're doing it with outstanding table settings that I could never replicate myself," Lizzie said. "But I look at cannabis as a lot more everyday, applying to both the stoner-dude culture that people imagine it to be as well as this elevated new space that it's been occupying."

She believes bridging the cultural gap could go a long way toward making attitudes about cannabis evolve.

"I know people are often surprised when they find out it's a part of my life," Lizzie said. "I look forward to the day when that's not such a big surprise."