Their title brings to mind someone in a suit, aviator sunglasses and a big black SUV. But Vermont's new cannabis compliance agents lean more toward flannel shirts and baby blue Priuses.

Michael DiTomasso, an unassuming 32-year-old with an environmental science degree, is one of four people whose job it is to inspect cannabis businesses and report back to the Vermont Cannabis Control Board. He and his clipboard-carrying colleagues have been crisscrossing the state this summer in an attempt to visit more than 240 cannabis businesses now licensed in Vermont.

That DiTomasso looks more like a hip high school teacher than some Federal Bureau of Investigation recruit is by design. While the control board's primary task is to ensure that the legal weed industry operates safely and fairly, it must also build trust with a community generally suspicious of the government — which is natural, considering the plant's patchwork legal status across the United States. That means the agents take an education-first approach and sometimes even offer technical support.

It's an odd position for the regulators, who find themselves both industry cheerleaders and rule enforcers. But it's a stance that the board said it must embrace if it hopes to convince some longtime illicit pot growers to go legit.

"We know we have good growers out there in Vermont; they're legendary, to some degree. But this is an industry that has thrived in an unregulated space," control board chair James Pepper said. "To get them into the market, [they] have to take this leap of faith with us."

There have been some precarious moments. Early delays put the control board months behind schedule, and the resulting application pileup threatened to jeopardize the fall outdoor harvest season. Fearing they might lose out, some growers started planting while their applications were pending — a technically illegal move that the control board, in a show of good faith, has said it would overlook.

"Folks who've decided that they want to do this legally are more than willing to jump through the hoops." Cary Giguere tweet this

Then the board wasn't able to fully staff its compliance team until August, three months after the first cultivation license was issued. Agents are now racing to check in with every grower before their first harvests.

Despite the rocky launch, many newly licensed cannabis cultivators have been more than happy to welcome an arm of the state into their fields. It means they're one step closer to establishing themselves in the legal market.

"Folks who've decided that they want to do this legally are more than willing to jump through the hoops," Cary Giguere, the control board's director of compliance and former head of the state's hemp program, said.

It's helped that the inspectors aren't just empty suits. They were hired based on their knowledge of the cannabis plant and good growing practices, which has helped them offer technical resources for cultivators. "They really know what they're talking about," Pepper said.

DiTomasso once grew weed for a medical dispensary in Vermont and spent the last three years as an inspector for the state's hemp program. That helped him meet many people who are now licensed to grow weed.

The four inspectors each have dedicated coverage zones. DiTomasso is responsible for Addison County, Orange County, Grand Isle County and parts of Washington County. The agents can perform unannounced inspections, but they have been trying to schedule their initial visits ahead of time, DiTomasso said, out of courtesy and recognition that many growers still have full-time jobs. He has inspected about 40 grow operations since joining the team in mid-August.

The board hopes to hire at least two more compliance agents in the coming months. The team will eventually inspect grow operations at least annually, while following up on any complaints that come in from the public.

Seven Days joined DiTomasso for a pair of morning inspections last week, starting with a visit to Bridport, where two of DiTomasso's former hemp acquaintances — Benjamin Fisher and Brennan Kensey — have been growing weed for their individual businesses. A black Labrador retriever named Opal raced around their legs as Fisher and Kensey led DiTomasso down a path toward a four-acre, fenced-in field, the skunky smell of weed growing stronger with each step.

The Bridport operation is among Vermont's largest, with the two men permitted to grow a combined 1,875 plants — 1,250 for Fisher, who has a tier 4 license, and 625 for Kensey, with tier 3 authorization. Beyond sharing a field, however, they must keep their businesses entirely separate.

Fisher received his license in August, while Kensey got his in mid-September. They, like many others, started planting before their applications were approved, and they now expect to harvest most of their crop in the coming days.

Cannabis business owners must give the inspectors access to anywhere the plant is grown, stored or sold, as well as to a wide range of business documents, including testing results, surveillance logs and inventory records. Most growers have yet to harvest, so for now, inspectors are mainly looking to confirm that growers understand and follow rules for security, pesticide use and the need for lab testing. 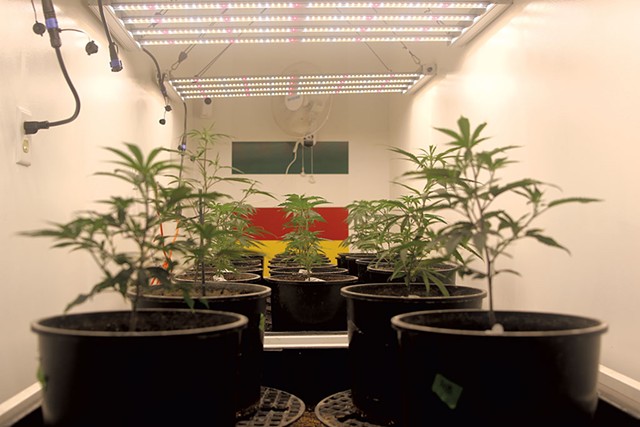 Indoor operators have the strictest requirements. They must keep plants behind locked doors and maintain an around-the-clock camera monitoring system that stores footage for at least 30 days. The board might request that video if, say, someone got sick from a product created by the business.

Outdoor grow operations must hide their crops from the view of public roads and must also have some type of security in place. The more plants a grower has, the more steps they must take to secure them. The smallest growers, for instance, need to implement only one security measure, such as a fence, while the largest must also install camera and alarm systems, among other requirements.

Both indoor and outdoor growers of all sizes, meanwhile, can only use approved pesticides. And all crops must be tested for pesticides and THC potency before they can be sold.

As he approached Kensey and Fisher's field, DiTomasso checked to make sure that their fence gate had a lock and that they had cameras trained on the crops. He asked them to list the pesticides they used — then poked his head in a nearby shed to see if there were bottles of anything they didn't mention. Later, he reviewed notebooks in which the growers were tracking data on the first few plants they had harvested.

DiTomasso also inquired about their future plans: whether they'd reached out to testing labs and either retailers or wholesalers. They had.

"We're looking to get rid of it as fast as we can," Fisher said, laughing.

DiTomasso did find one potential violation. The growers had tried to maintain two distinct sections in the field to differentiate their businesses. But Kensey ran out of seeds partway through his final row, so Fisher finished it off with his own. They planted a tiny red flag as a line of demarcation, but DiTomasso suspected the board would almost certainly want clearer separation.

"Most people have been waiting for this moment for a long time." Cannabis Control Board CHAIR James Pepper tweet this

If the growers were annoyed, they didn't show it. Fisher, noting that he only had about 10 plants in the row of concern, said he could be flexible. "If I need to, I can ixnay those," he said with a shrug.

Half an hour later, DiTomasso pulled into the driveway of Devon Faulkner, who has been growing weed in his family's large detached garage. As one of more than 175 tier 1 license holders, Faulkner can legally cultivate up to 125 plants, or about 1,000 square feet. But he's only running at about half capacity while he juggles a full-time job and a growing family; his wife recently gave birth to their second child.

After DiTomasso toured the building, he and Faulkner spent a few minutes discussing the newly legal market. The grower, who had just swapped out his old grow lights for more energy-efficient ones, said he hoped to eventually take his hobby full time — so long as the market holds up.

DiTomasso's inspections often end like this, with growers expressing a mix of excitement and anxiety about the market's future. Some lost money growing hemp during that crop's boom-bust cycle and are taking a more cautious approach with weed. Others are holding their breath to see how their crops fare over the next few weeks. The control board, meanwhile, seems equally anxious as it waits to see whether growers will be able to produce enough crop to meet the market's early demand.

The compliance team's role will gradually change as complaints come in from the public and agents start to learn which businesses they need to keep a closer eye on. Pepper, the board chair, acknowledged that the team will likely have to crack down on some bad actors over time.

For now, though, he's not too worried.

"Most people have been waiting for this moment for a long time," Pepper said. "They're just so happy and anxious to finally be out of the shadows and into the daylight, doing what is their life passion — and getting a paycheck for it."