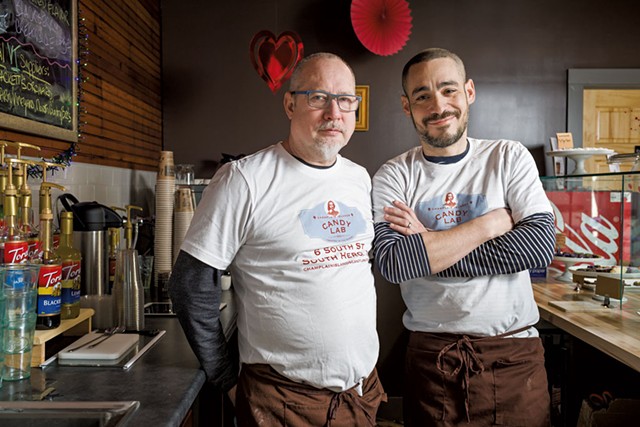 From the day they started dating in 2002, Albert Reyes-McCarver and Michael McCarver-Reyes have been essentially inseparable. "It wasn't so much dating; he moved in the next week," Michael said with a smile, sitting across from his husband early last week at Champlain Islands Candy Lab, their new South Hero shop and production kitchen.

"We do everything together," elaborated Albert, noting that their personalities are complementary. "There's a yin and a yang with us."

Over the years, the pair has epitomized togetherness in both their personal and professional lives. "We're around each other 24-7. People sometimes find it odd," Albert conceded, "but we're best friends."

Living together in New York City, the couple started their own medical writing company, then both worked for the health information website WebMD for a decade before being simultaneously laid off in late 2016 when the company downsized.

A few years earlier, the pair had bought a vacation and weekend getaway home in Grand Isle with an eye to moving up full time. The severance pay from WebMD jump-started that plan and the birth of their latest joint venture. Champlain Islands Candy Lab launched online in 2016, followed by limited local retail distribution and a stand at the Saturday Champlain Islands Farmers Market starting in the summer of 2017.

"Your birthday's in December?" his husband, 57, queried with a straight face. "Oh, shut up," Albert retorted, laughing. "He does that to me all the time."

In July 2011, Albert and Michael were among the crowd of couples in line on the first day gay marriage was legal in New York State. In the confusion of that inaugural day, a bureaucrat incorrectly told them they had to add their spouse's last name after theirs rather than combining the two into a shared double-barreled name. Their resulting mirror-image surnames were a minor blip on a joyful day.

"Some people didn't want anything to do with the hegemonic institution [of marriage]," Michael said, "but I wanted to be able to call him my husband — and I wanted the legal protections for us."

"'Partner' is such a weird word," Albert added. "Like you're incorporated or something."

The two are, of course, business partners, although Champlain Islands Candy Lab is not incorporated. The venture is quite different from their previous shared professional experiences and not an obvious next step for a law school graduate (Michael) and a biochemist with a master's in education (Albert). But both are passionate about food. And, after the shock of being laid off, "we decided we might as well do something that would enrich our lives," Albert said.

"It's an experience to buy chocolates here, like going to a jewelry store." Albert Reyes-McCarver tweet this

In their new headquarters, a low gate separates the shining stainless-steel kitchen — or "lab," as they call it — from the retail space. Before pausing to chat last week, Michael had been carefully laying out toasted whole almonds in wave-shaped molds that he would complete with dried cherries and dark chocolate and then dust with ground almonds and sea salt.

"It's called Midnight Dream," he said. "It was the first bar I ever came up with. You'll notice the almonds are all pointed in the same direction. We pay a lot of attention to taste ratio in every bite. There's just enough room for a cherry between each one." 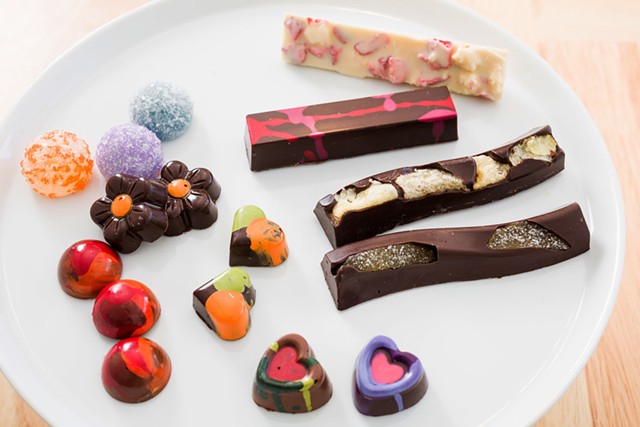 The candy makers' special-order Valentine's Day creation, the Supersized Chocolate Pearl-Filled Sweetheart, was also on display. A large hollow chocolate heart had been cracked open to unveil a half dozen caramel-filled chocolate domes splashed abstractly with color, like the best Kinder Surprise Egg ever. Unlike the rest of the case's contents, this creation is too delicate to ship, requiring that customers trek to South Hero for pickup.

That should be no hardship for the many locals who already stop by the candy lab regularly for a sweet treat, an espresso, a rich cup of drinking chocolate or a bakery special, such as the mouth-watering apple fritters with cider glaze on offer last week. Those from farther away might still consider making the trip. "It's an experience to buy chocolates here, like going to a jewelry store," said Albert.

When the couple decided to focus on food, chocolate was not their initial plan. In New York City, they gained some industry insight from their experience as silent investors in a restaurant. "I wanted to do French macarons," Michael said, referring to the delicate almond cookie. "Albert wanted to do hard candy."

Both confections proved too finicky, so they landed on chocolate, which has its own demands. Albert's mother had worked for a high-end chocolate company during his New Jersey childhood, and his biochemistry background serves him well in working with chocolate, he said. He was the one who did seven months of professional chocolatier training online through Ecole Chocolat. "But I did the homework, too," Michael said.

The couple started production in their Grand Isle home but soon outgrew it. "We thought it was a large kitchen, but it turned out not to be," Michael said.

They expanded production into the basement kitchen of a former church-turned-art-gallery, but it quickly became clear that they needed their own dedicated facility. In early 2018, the couple bought the South Hero property, then took the better part of a year to renovate it into a small storefront with a large production kitchen. A side room used for storage will host special events like an upcoming Valentine's Day wine and caramel tasting with nearby Snow Farm Vineyard.

The South Street building had been an antique store, craft shop and law offices, but "it started out as a food business," Albert said, pointing to a meat hook in the ceiling. "This was originally the meat locker of a butcher shop."

The pair envisioned the retail counter primarily as an extra outlet for which they could make year-round, production-efficient batches to balance online orders. The amount of foot traffic they received in their first few weeks surprised them.

"We expected a slow ramp-up. We had no clue that before Christmas we'd be here 'til 1:30 or two in the morning and waking up at five to come back," Michael said. "Our dogs weren't speaking to us, but it made us really happy. The support has been incredible."

They received strong local support from the beginning, they said, especially from Wendy Horne of Keeler's Bay Variety Store in South Hero, who stocked their products and showed them the retail ropes. "She had faith in us," Albert said.

It was quite a change, the couple said, to move from a huge city to the quiet Vermont islands. But the adjustment to full-time country life has been smoother than expected. After a few years, Michael said, "We know more people on these islands than in NYC."

Things have calmed down a little for the chocolatiers in the New Year, but business remains steady, and they just hired their first employee.

"I love it so much, even if I'm here for 15 hours and I can't feel my heels because I'm standing so much," Albert said. "I love that it's cerebral but also hands-on, that we can interface with real customers and build a community around our work."

The couple continues to enjoy working with and around each other. When asked how they divide the tasks, Albert said, "I don't do dishes." His husband smiled and said evenly, "I didn't do them, but I do now." m