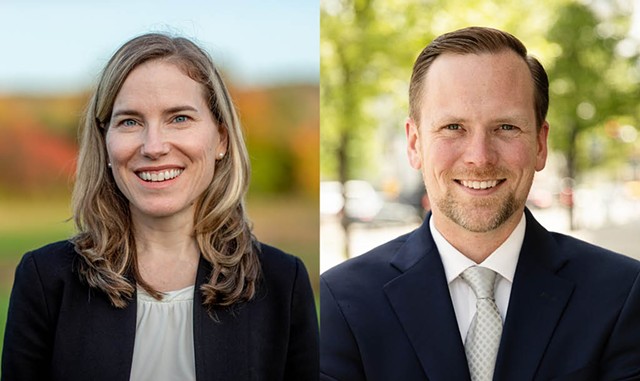 The attorney general is Vermont's lawyer and represents the state in civil and criminal proceedings. The Office of the Attorney General handles a wide variety of cases, including criminal offenses, civil rights violations, consumer protection and environmental matters. Democrat T.J. Donovan stepped down earlier this month to take another job. Two Democrats are vying to replace him. One of them will face a Republican and a Progressive challenger in the November election.

Why are you running?

I am running for attorney general because Vermont is at a critical moment. Reproductive rights, global warming, safer gun laws and internet safety are on the line. Vermont needs a leader with the experience to meet this moment. As attorney general, I will be ready to lead on Day 1.

Three accomplishments that qualify you:

For four years I have served as chief of staff of the Attorney General's Office. In that role, I was director of the consumer assistance program and helped Vermonters with scams, identity theft and consumer problems. Finally, raising a family as a working mother has given me an enhanced perspective on data privacy, gun violence, child safety and reproductive liberty.

Is Vermont doing enough to address biases in the criminal justice system?

What policies would you pursue related to the ongoing opioid crisis?

As attorney general, I will zealously pursue all opportunities for justice against companies that contributed to, and profited from, the opioid crisis. I will continue to advocate for harm-reduction strategies, access to expungements, and adequate funding for court diversion and restorative justice.

Name a Vermonter who inspires you.

Even among trailblazers, Consuelo Northrop Bailey is remarkable. An attorney, she was the first woman to serve as speaker of the House and the first woman in the nation to serve as lt. governor. Her portrait in the Statehouse has been a reminder of whose shoulders I stand on.

Why are you running?

Vermont's legal challenges require a proactive approach — whether meeting public safety challenges, implementing criminal justice reform, or defending democracy and our liberties. I am running to create a system rooted in Vermont values — equity, integrity and empathy. This means standing up for Vermont's most vulnerable and advocating for change.

Three accomplishments that qualify you:

Is Vermont doing enough to address biases in the criminal justice system?

Clearly not. The veto of H.505, which proposed reform of drug crime sentences, is the latest example of stalled efforts to reduce disparities. We must commit to progress each year and also ensure BIPOC victims of crime gain confidence in the justice system and feel protected.

What policies would you pursue related to the ongoing opioid crisis?

Defelonizing personal-use possession, emphasizing rehabilitation and court diversion, and making medically assisted treatment more accessible in rural areas. Further, the lack of a statewide enforcement strategy has contributed to inconsistent results in limiting the flow of fentanyl into Vermont. Leadership, coupled with empathy and a pragmatic approach, is needed.

Name a Vermonter who inspires you.

Sen. Patrick Leahy was a state's attorney before devoting his career to public service in the Senate. He spent decades working on behalf of Vermonters and is leaving office with an incredible legacy of results and dignity while in office.