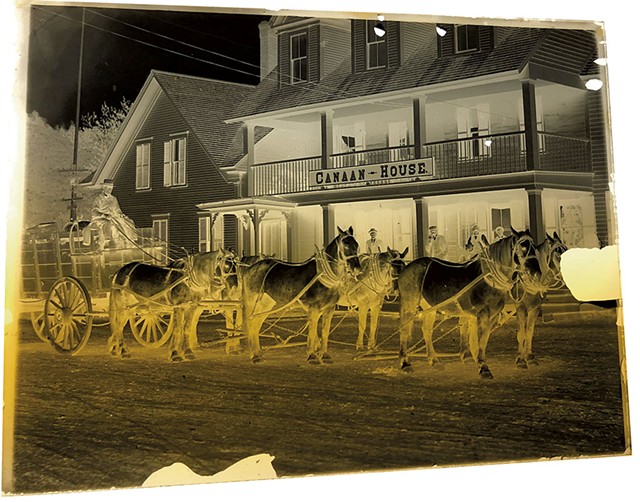 Dennis Fuller was raised in Canaan, a Connecticut River town located at the meeting place of New Hampshire, Vermont and Québec, and he's always been interested in his hometown. But not until he started looking closely at hundreds of old glass-plate photo negatives did Fuller discover that liquor smugglers used to send riderless horses through the woods from Québec to evade U.S. Customs inspectors.

The horses, draped with burlap sacks, carried the bottles over the Canadian border back to their barns in Canaan; the owners drove their cars through U.S. Customs without a care.

"The horses knew their way home on the trails," said Fuller, the chair of the local historical society. He has a photo of some equine couriers that were intercepted with their contraband in the Prohibition era, which lasted from 1920 to 1933. "The Customs people eventually figured it out," he said.

"The more you find, the more you want to find." Dennis Fuller tweet this

Peering at glass negatives on a light table is a labor of love for Fuller, 74, who is retired from a career with U.S. Customs and Border Protection that took him to Winnipeg, Manitoba, for 32 years. When he returned to Canaan a decade ago, he got involved with the historical society and with hundreds, possibly thousands, of old glass negatives that the town offices had asked the society to take off their hands. 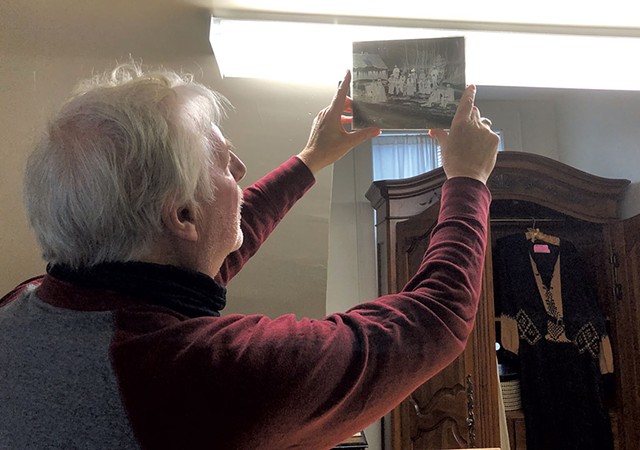 Most of the negatives, thin rectangles about the size of a small paperback book, came from a photo studio operated by local residents Henry and Carrie Lund around the turn of the 19th century. Since then, the society has received a few hundred more old negatives. Some came not from the Lund collection but from a man in Island Pond; others are from the former home of Beatrice Holmes, who once operated a store and post office in town.

These days, Fuller spends his time identifying and digitizing the images. He prints out his favorites for display in the small historical society museum, which occupies the second floor of a former stagecoach stop built in 1846. The town library is downstairs. 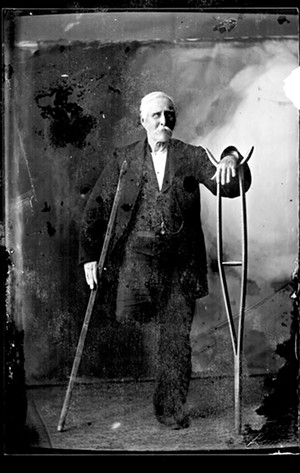 Glass negatives, relics of photography's earliest era, were in use from around 1870 to the 1920s. The negatives show the opposite of the image in terms of light and dark.

The glass negatives in the Canaan collection tell a story of a time when the town, at the crossroads of three large lumber regions, bustled with several general stores, a tannery, a blacksmith and other businesses that supported the logging and hunting that were the basis of economic life.

The negatives show log drives and picnics held at the site of logging and sugaring operations. There are photos of the 125-year-old furniture mill in Beecher Falls, a village about two miles north of downtown Canaan, that employed 500 people at its peak in the 1950s. A pair of brothers who owned a furniture company bought the mill in 1935 and took its name, Ethan Allen, for their business. It is now one of the largest furniture companies in the country and is based in North Carolina. The wood mill in Beecher Falls is still one of the region's largest employers. 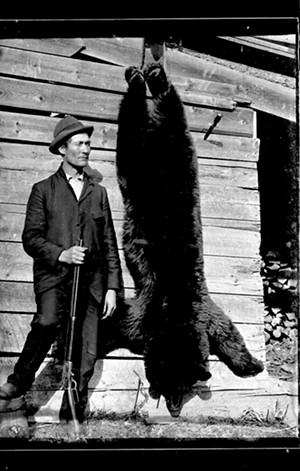 Most of the photos are portraits. They show children posing in the Lunds' studio with toys, or families at their homes. There are groups with deer they've shot, a man with a huge dead bear, and couples out for a drive in Canaan's downtown, which has a large green surrounded by homes. One negative shows a dog hitched to a little cart, pulling a child.

Canaan's architecture hasn't changed much, though a big hotel visible in many of the images burned down in the 1930s.

Henry Lund, a lawyer, and his wife had a Victorian home with a photo studio; it still occupies one corner of the town square. The negatives sat in the basement until the late 1980s, when the family that owned the house asked Charlie Jordan, a newspaperman in nearby Colebrook, N.H., whether he wanted to have a look. Jordan spent long hours there.

"I'm holding up each image to the light, and even in reverse I could tell they were exceptional," said Jordan, who published about a dozen of the photos in his now-defunct monthly Coos Magazine in 1989. 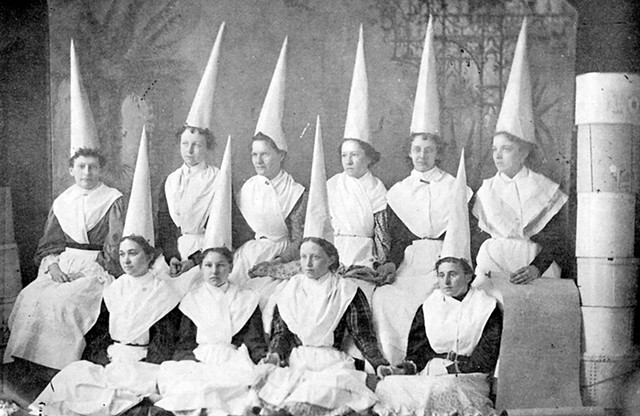 He was struck by a family group that included a man with a large revolver on his lap. He also noted a formal portrait of several women in tall, pointed white hats.

"They had an eye for the bizarre," he said of the Lunds.

Jordan returned the negatives, which were eventually moved to the town offices.

Ever since they've landed with him at the historical society, Fuller has been trying to identify the people in the photos. He combs through a Library of Congress website that features old newspapers, searching the pages of the defunct Essex County Herald for faces he's seen in the negatives. 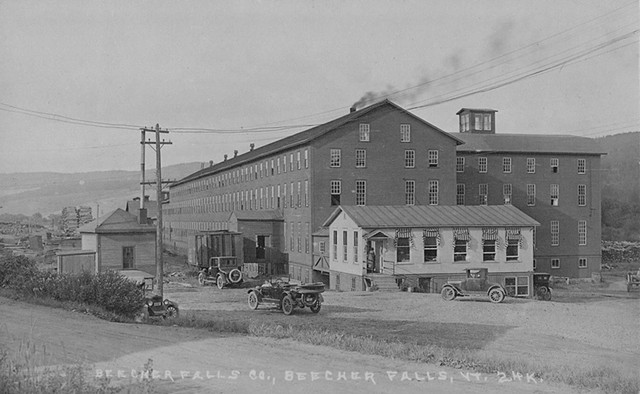 In this way, he was able to explain a photo of people in wagons wearing spooky-looking masks. A newspaper article described Canaan's Halloween "parade of horribles" in 1907, and he recognized the store in the background.

"It's fun doing stuff like that," he said, adding that it's hard to stop. "The more you find, the more you want to find."

Jordan, who now publishes the weekly Colebrook Chronicle newspaper, showed Fuller a program that flips the light and the dark in negatives so that they look like photos — not like spooky alter images. 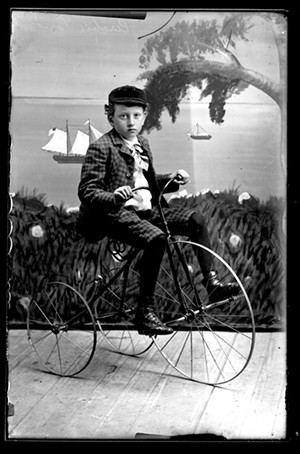 Fuller is haunted by the thought of the photos that he knows are missing. There are almost no pictures of the regional baseball league, for example. In the 1920s, baseball was so big in Canaan that it dominated the first few pages of the newspaper, and the town teams competed in Québec and New Hampshire. Fuller himself played for a team in neighboring Hereford, Québec, in the 1950s. But if anyone documented the 1920s-era players or crowds, the negatives aren't to be found.

Also absent are photos of the racetrack built by George Van Dyke, a lumber baron who once owned much of the North Country. His companies used to send logs down the Connecticut River to sawmills in Massachusetts, and his track included a huge grandstand. Fuller hasn't found any photos of Van Dyke himself, either, and has just one photo of the racehorses.

There are houses where the track used to be.

Fuller said Canaan had about 1,000 residents in 1900 and 1950. It has about 325 now, many of them retired. Though things aren't what they used to be, the town hasn't totally come to a standstill. The bowling alley that once supported 12 bowling leagues, Wayne's Lanes, is still in business, and a new café, April's Maple, opened in 2014 about seven miles west of downtown. Canaanites do their grocery shopping in neighboring West Stewartstown, N.H., just across the Connecticut River. 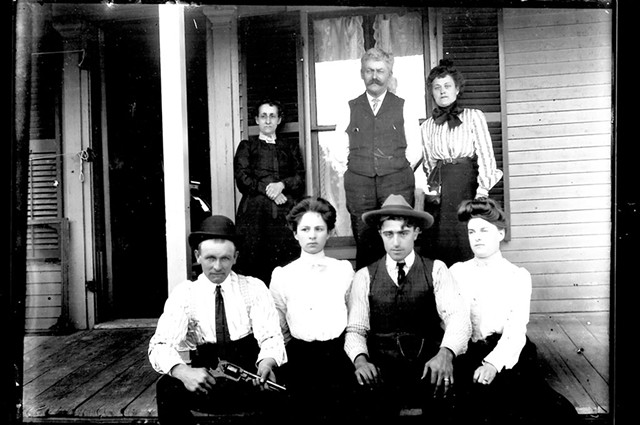 The Ethan Allen furniture mill, built in the 1890s by a cooperative of carpenters from Vermont, New Hampshire and Québec, still employs about 100 people, Fuller said. The fire department, which is next to the mill, is the only one in Vermont that also serves Québec towns as part of its established service area, not as part of mutual aid, said Gary Moore. He visits Beecher Falls every month as a hazardous materials specialist for the state Division of Fire Safety HAZMAT Team.

Back in the 1950s, Fuller said, Canaan was practically a self-contained community. If his family needed something they couldn't find in town, they traveled to Colebrook, eight miles away. Once a year, Fuller, who played the trumpet, made the journey to Burlington with his schoolmates for the All-State Music Festival. Fuller remembers childhood summers spent playing baseball all day, every day.

"We had everything we needed," he said.

The original print version of this article was headlined "Reverse History"