At 78, Joan Rivers is as funny as ever 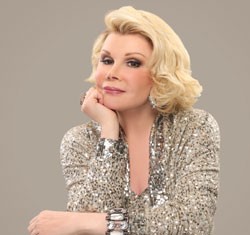 In an episode of the FX series “Louie” last season, comedian Louis C.K. meets Joan Rivers in her hotel room in Atlantic City. C.K. is at a crossroads following a lousy set in a casino there and asks the comedy icon for advice on dealing with the indignities of life as a working comic.

“I wish I could tell you it gets better,” she replies, her familiar rasp softened with motherly tenderness. “But it doesn’t get better. You get better.”

Then C.K. clumsily makes a pass at her. (She promptly shuts him down.)

While it is a very funny scene, Rivers’ advice comes from the heart. Over a career spanning six decades, she has experienced tremendous highs and terrible — often very public — lows. She is celebrated as a pioneer by modern female comedians such as Janeane Garofalo and Sarah Silverman; Rivers broke through in the 1960s, when comedy was still very much a man’s game. She is a best-selling author and has been nominated for Grammy and Emmy awards. Currently, Rivers can be seen on two popular television shows — “Fashion Police” and the reality show “Joan & Melissa: Joan Knows Best,” with her daughter, Melissa. And, at 78, she still maintains a busy touring schedule as a standup comic.

Next week Rivers will be in Vermont for two shows: Thursday, April 26, at the Flynn MainStage in Burlington and Friday, April 27, at the Paramount Theatre in Rutland. In advance of those performances, Seven Days chatted with the comedian by phone from her hotel room in Florida.

SEVEN DAYS: You wear a lot of hats — writer, TV personality, full-time celebrity, etc. Do you still consider yourself to be a comedian first?

JOAN RIVERS: It’s whatever I’m doing in the moment. If I’m writing “Fashion Police,” I’m a writer. If I’m performing, I’m a performer. But it’s always with comedy in mind.

SD: You’re viewed as a trailblazer for women in comedy. Is that something you think about at all?

JR: It’s never crossed my mind. It doesn’t cross my mind. I’m not a trailblazer. I’m still blazing the fucking trail. And I’m so not interested in hearing about that. When someone tells me, “Oh, you opened the door!” I want to say, “Sweetheart, I could take you with both my hands behind my back.”

SD: Is it strange to have so much of your relationship with your daughter on display in front of millions of people?

JR: No, because “Joan Knows Best,” which was just picked up for a third season, is what television is now. Reality TV has taken the place of soap operas. Have you ever met someone who hasn’t said, “Oh, my life is a sitcom?” We’re just lucky enough to have them showing our lives as a sitcom.

SD: Do you long for the days when television was based on sitcoms and scripted shows?

JR: I just find [sitcoms] stupid. I was a guest on a sitcom the other week, and it’s just … ugh. It’s so unreal. Like, come on, this wouldn’t happen.

SD: You were recently on “Louie,” which is kind of like the anti-sitcom. When Louis C.K. had Dane Cook on the show, he told Dane he wouldn’t let him change anything in the script.

JR: Well, of course not. Dane’s not funny.

SD: Right. But your scene and advice seemed like it came from the heart.

JR: I think Louis C.K. is brilliant. And now I think he’s even more brilliant when you told me this. But I’m sorry, [Dane Cook] ain’t funny. And [he’s] gonna tell Louis what’s funny? He’s lucky to be standing.

SD: I imagine he’d take input from you, though.

JR: Louis sent me a script, which I thought was very funny. We spoke on the phone — I never met him — and I said, “Let’s try that” or “Let’s try this.” We worked very well together. I think he’s incredible.

SD: Did you know he was going to try and make out with you?

JR: [Laughs] That was ad-libbed on the set. It was great. It was just improvisational and I loved it.

SD: His show is unique in part because he has complete control of it. He even edits it himself. Why do you think that works for him when it hasn’t worked for, or been tried by, other people?

JR: Because he’s better. It’s that simple. Why did “Seinfeld” work? It’s because Larry David is brilliant. You get someone who is fabulous, and it works if you let them have their way. He doesn’t have to listen to some moron in a studio, or have a church lady in charge of his sitcom. And boy, oh boy, does he deserve it.

SD: What were your thoughts on the documentary about you, Joan Rivers: A Piece of Work?

JR: I thought it was terrific. It was done by my friend’s daughter, of all people. We never had a contract or anything. She was with me for a year, and I always wondered what the hell she was getting. But I thought what she chose to put in the film was terrific.

SD: Was anything off limits?

JR: You can’t have that. If you’re going to do a biography, do a biography. I hate when it’s all about how good somebody is. Like, “Hitler in his spare time was a great leader and good tap dancer.” She was very honest in what she did. I thought it was great.

SD: Are you dating these days?

JR: Ugh. I have no time. And there is no one left alive my age. I don’t like younger men, so who’s left? God, and Jesus if he comes back. But really, my life is very busy.

SD: I imagine part of that is that simply being a celebrity has become a full-time job. Not that you are, but talk to me about the idea of being famous for being famous.

JR: Everybody these days is famous for being famous. Or a lot of people, anyway. Somebody said to me the other day that you can tell where a society is by looking at their heroes. And look at our reality heroes today. It is so depressing. In the ’30s, everybody wanted to be better, to be educated. Your heroes were presidents. Now your heroes are Snooki.

JR: It really is.

SD: I’m curious to hear your thoughts on the recent “slut” flap with Rush Limbaugh.

JR: What do they expect? Rush Limbaugh is Rush Limbaugh, and what do they expect him to say? Have you been listening to Rush Limbaugh for the last 15 years? This is nothing new. That’s him. He’s an idiot. But we do have freedom of speech. And yes, I’m pro-abortion. And I think if you don’t have a uterus, I’m not interested in your opinion. I don’t tell you what to do with prostate cancer, and you don’t tell me what to do with my uterus.

SD: Do you actually have a beef with Betty White?

JR: Absolutely not! She’s a lovely woman. And she’s opened the door for all of us. Nowadays, there’s no such thing as “Joan is too old,” which I used to get a lot. Now it’s like, “Joan is a chicken. Look at Betty White, she’s ninetysomething.” God bless Betty White. I hope she stays terrific for another eight years.

SD: Speaking of age, you’re on the road all the time. You’re performing or working on other projects constantly. It must be exhausting. How do you do it?

JR: I love my work. I love that I’ve gotten the opportunities, and you have to go with the opportunities when they happen. With us, everything is a 13-week cycle. So when I have an opportunity, I run with it. I don’t say I’m too tired.

SD: You often tap local comedians to open for you when you tour. But they have to be male. Why is that?

SD: Do have any thoughts on the current state of standup comedy?

JR: I don’t really know. But I know I’m working the best I’ve ever worked. There’s no question about it, because I feel so free. The only good thing about age is that it frees you. So I say exactly what I want to say. It’s too rough. I’ll say to them, here’s a joke I don’t think I should tell anybody, but I think it’s hilarious.

SD: You’ve never had a reputation for holding anything back, so that’s kind of a scary thought.

JR: No, and I’m not gonna start now. I have a book coming out in June that I think … [laughs] I think it’s going to polarize me.

JR: It’s called I Hate Everybody.

JR: Oh, I laughed without a stop writing it. Laughed for a year. But now we’re looking at it going, “This is hilarious, but, oh, my God. Oh, dear. Did you see what she said about blind people?”