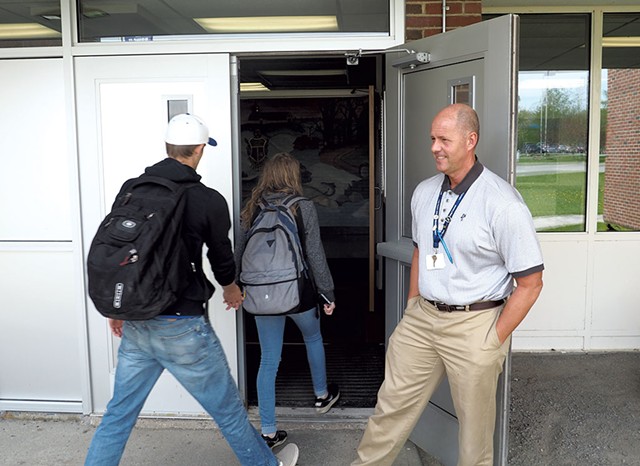 Lake Region Union High School principal Andre Messier stood outside the rural Northeast Kingdom school last Thursday and pointed uphill into nearby woods. In the event of a shooting, he said, fleeing students would follow a network of trails to meet law enforcement officers at a gathering point some distance from the school. By the second day of each academic year, every student knows this plan.

"What we tell kids is, get up into the tree line," Messier said. "Get away."

With his bald head and bulging biceps, Messier could trade the ID badge hanging from his neck for a whistle and pass for a football coach. But while coaches speak in metaphors of battle, Messier must consider how to respond to an actual armed assault on students and staff.

"[I]t is becoming an increasingly worrisome part of what we do," Messier said. "[That] was not the landscape in education when I got into it."

Just last Friday, a school shooting reminded the nation how much that landscape has changed. A 17-year-old student in Santa Fe, Texas, brought his father's guns to school, killed 10 people and wounded 13. Police stationed at the school exchanged gunfire with the teen for nearly half an hour before he surrendered.

In February, a student in Parkland, Fla., killed 17 and wounded 17 more at his school. The following day, Vermont police arrested Jack Sawyer, 18, on suspicion of plotting to murder students at Fair Haven Union High School. That made it clear why all schools have to be prepared for the worst, Messier said.

"This isn't something that's happening just in Florida," Messier said. "This can happen in Vermont. It can happen anywhere."

In response to the Fair Haven case, Gov. Phil Scott ordered a statewide security audit of all Vermont schools and asked the legislature to appropriate $4 million for school security upgrades. Lawmakers included the money in the capital bill, which funds infrastructure improvements.

Officials in Vermont speak with pride about school safety efforts, but their optimism is guarded. Rutland City schools assistant superintendent Rob Bliss said the focus on infrastructure is important but acknowledged the limits of such investments.

"You can put up walls and barriers and bulletproof stuff and everything else, but the truth is still that the only thing that's going to stop a major catastrophe is information," Bliss said, emphasizing the importance of trust and communication between students and staff.

A situation in Randolph on Monday highlighted his point. A middle school student told a parent that another student planned to "shoot up the school tomorrow," according to a press release from local police. Officials closed schools on Tuesday as a precaution, intervening before locks and cameras could become the only thing between students and danger.

The state's push to improve school safety doesn't stem from the most recent cases. Vermont has been working for nearly two decades to make schools safer.

"The reason why Fair Haven didn't happen is because of the community relationships." Rob Evans tweet this

The survey examined schools' infrastructure, including security cameras and door locks, and looked at their plans and procedures in the event of a shooting. Ninety-eight percent of Vermont's public schools and 88 percent of independent schools took part in the audit.

Evans' take on the results?

"I think we've got to do better," he said, "or there's a need, I should say, for more planning and training."

Only 30 percent of Vermont schools have classroom doors that can be locked from inside. Fifteen percent have no security cameras or other forms of electronic monitoring. More than a third do not have reliable cellphone coverage on school grounds, potentially making it difficult to reach emergency responders or to coordinate evacuation efforts. Only one school in five has a school resource officer — a law enforcement officer assigned to work there.

While such tools can help protect schools, the shooting in Santa Fe shows that tragedy can strike even at an institution with two armed police officers.

The audit's focus on physical security measures shouldn't be seen as a suggestion that schools become fortresses, Evans said. Borrowing from military terminology, some Milton parents came to a meeting with their legislators in March and voiced concern that schools are unfortified "soft targets" and should be "hardened," either by putting armed guards inside or bulletproofing key areas.

While the safety audit focused on physical security, school administrators and safety experts agree the averted shooting in Fair Haven highlights the critical need for student support and good relationships between students and staff. Sawyer, who had bought a shotgun he allegedly planned to use in a school attack, was arrested after a friend reported threats the young man had made on social media.

Bliss wasn't saying schools should leave the doors unlocked and turn the surveillance cameras off. In fact, his district plans to apply for a school safety grant. But the best way to prevent violence, he said, is to create an environment where students feel safe, comfortable and supported.

"We want to make sure our students have positive relationships with the adults in our community and our schools," Bliss said. "Wellness and mental well-being is job one."

"I couldn't agree more," Evans said. "The reason why Fair Haven didn't happen is because of the community relationships ... where folks felt comfortable [deciding], 'Hey somebody's making this type of threat, and it's not OK, and I'm going to tell somebody.'"

A new working group including Evans, state officials, and representatives for teachers and law enforcement is establishing a system to pay out the $4 million of school safety money in the form of $25,000 grants.

Martha Allen, president of the Vermont-National Education Association, a teachers' union, and a member of the working group, said members are focused on developing a set of minimum safety steps — including door locks, security cameras, communications systems and crisis plans — the grants will support.

"If you haven't reached that standard, you'll be put at the front of the line to receive the money," she said.

Allen agreed that schools should not be hardened. Even if that were a good strategy, it's simply not practical, she said.

Allen, too, said mental health support for students is a key element of school safety.

"We've had people hospitalized; a woman lost vision in one eye," she said. "Some people quit work because the threat day by day was too much, and the pressure that these staff are put under trying to help these children is tremendous."

Many of the safety and security measures covered by the state audit are already in place at Lake Region.

Its self-reliance is a necessity. Like many Vermont schools, Lake Region isn't in a downtown. It's on a hill two miles outside the village of Orleans. This makes for picturesque views across the Barton River valley from classroom windows but means students and staff must be prepared to handle emergencies for up to 15 minutes until the nearest police arrive, Messier said.

"If there's something that goes on, we're pretty much on our own," he said.

Messier also expects his staff to be prepared to make decisions without him.

"The reality is, if there were an incident, [the vice principal and I] might not be around. There's a good likelihood that we would not be able to be leading them in the chaos," Messier said, then paused. "Because there's a good chance that we would be taken out," he said matter-of-factly.

A radio crackled from Messier's belt as he sat in his office, where he can pull up video from any of the school's security cameras. Visitors must be buzzed into the building by office staff who can see the entrance on camera. But Messier said the school's best security feature by far is a culture that fosters open communication between students and staff.

"We know our kids, and we know who they are, so we can tell very quickly if something is off-kilter or if someone is off," Messier said.

Before long, he got up and walked to the school's entrance, where he stood greeting and high-fiving students on their way in to an afternoon of testing.