Can the Catholic Diocese Boot a "Group Home" From Its North Avenue Property? A Judge Will Decide | Politics | Seven Days | Vermont's Independent Voice

Can the Catholic Diocese Boot a "Group Home" From Its North Avenue Property? A Judge Will Decide 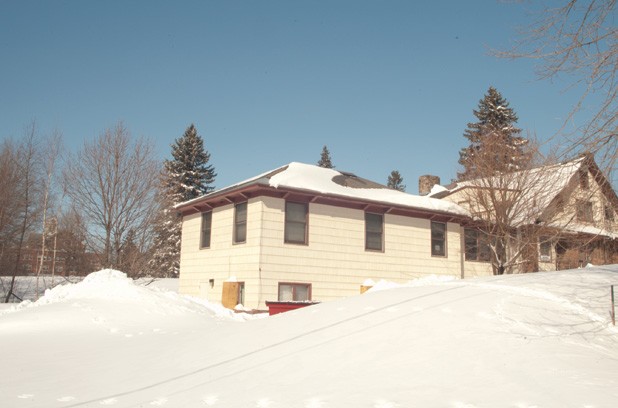 Who would Jesus evict?

That might be the moral dilemma underlying a complex case involving the Roman Catholic Diocese of Vermont, Burlington College and 17 residents living in Lakeview, a HowardCenter group home on diocesan property.

The answer, though, will be determined by the courts: Did HowardCenter receive a proper eviction notice from the diocese last May, when the latter sold its North Avenue property to Burlington College for $10 million? The proceeds of the sale are intended to help pay off portions of a $17.85 million settlement with 26 victims of priest sexual abuse that occurred during the 1970s.

The 32-acre property includes the diocesan headquarters — formerly home to St. Joseph Orphanage — along with a smaller house that had served at different times as a retirement home and a Catholic-run prep school for teenage boys. For 13 years, HowardCenter has leased that home, and its 1.2 acres, for residents in need of around-the-clock mental-health treatment and support. It pays the diocese $5000 a month in rent.

Last Wednesday, the diocese filed suit in Vermont Superior Court in Burlington, asking a judge to rule on the legality of its eviction notice. The diocese claims it issued a proper emergency lease-termination notice last May, giving HowardCenter six months to vacate the property. In September, HowardCenter questioned the legality of the diocese’s notice in hopes of buying extra time to find a new group-home location. The initial deadline eviction deadline was November 30. The diocese and college have allowed HowardCenter to remain longer, but appear to be losing patience. Howard-Center is now saying its clients may need to stay on the property until summer.

Rather than negotiate further, the diocese decided to call the question.

“This situation was not ill intentioned but required if the Diocese was to satisfy its financial obligations,” said Father John McDermott in an email to Seven Days. “The Diocese has exerted its best efforts to assist HowardCenter in its relocation to another facility. To date, no resolution has been reached, and it appears none is forthcoming. This situation is placing both the diocese and Burlington College in a very problematic circumstance.”

HowardCenter argues that under the terms of its lease the six-month emergency termination could only be for “unforeseen circumstances.” When the sales-and-purchase agreement was signed last year between the diocese and Burlington College, the diocese claimed the “unforeseen circumstance” was its decision to settle the priest sex-abuse cases filed against it in one lump sum, necessitating the sale of their sprawling lakefront property.

“We don’t feel their notice met the criteria under the lease,” said Todd Centybear, executive director of HowardCenter. “It was really a circumstance of their own choosing to settle the claims at once.”

While the diocese and HowardCenter duke it out in court, Burlington College is anxiously awaiting word on the outcome. That’s because a delayed move could put the college at risk of defaulting on the bonds it used to buy the property. If the group isn’t gone by May 31, BC president Jane Sanders said it could jeopardize the tax-exempt status of the bonds.

According to a February 11 letter from an attorney who works for the state-run Vermont Educational and Health Buildings Financing Agency — which issues bonds on behalf of hospitals and colleges in Vermont — allowing HowardCenter to run its group home beyond the end of May could violate Internal Revenue Service rules, because it’s a “private use” that is incompatible with the college’s own nonprofit mission.

“That private use, if not terminated in the very near future, will cause the bond issuance to be deemed taxable to the bond holders,” wrote Middlebury-based attorney James Foley. “As you might expect, the bond holders will not be pleased to learn that the bonds they purchased on a tax-exempt basis are now taxable.”

Foley added that a change in tax-exempt status would “undoubtedly constitute” a default under the bonds, and could mean “a significant liability attributable to and payable by Burlington College.”

Sanders, the wife of U.S. Sen. Bernie Sanders, is chagrined to be caught up in what amounts to an eviction of 17 mentally disabled tenants.

“We are not trying to be the bad guys here,” she said. “We have always said that we’d be helpful and we’d try to help them as they found a new home — and we have. At first, we agreed to delay for one semester, and even that was pushing it for us. Six months beyond that is not realistic.”

Sanders said the college and diocese have made financial sacrifices to allow HowardCenter to stay on the property beyond its eviction date. The college is paying $3000 a month out of pocket to rent housing for some students who Sanders had hoped would be living in Lakeview.

“We thought a year’s time was appropriate, and it’s worrisome that they haven’t found a place yet, but there is really no choice any longer,” Sanders added.

HowardCenter officials say they are sympathetic to Burlington College’s plight and the desire for the diocese to clear the property as part of its agreement to sell to the college. But finding a replacement site has proven difficult, noted Centybear.

HowardCenter claims it has reviewed more than three dozen properties, including two owned by Burlington College. Sanders offered two options: housing the group either on a single floor within its current headquarters on North Avenue or at one of its apartment buildings farther north. Neither proved feasible. Current HowardCenter-owned sites are either too small or would be too costly to rehab.

“Even though we own a fair amount of properties, we don’t have enough to house these residents,” said Centybear. The HowardCenter has considered splitting up the 17 residents into separate homes, but that would also be expensive because of the amount of support the residents require. “We are trying to keep them as intact as possible,” said Centybear. “They really see themselves as a family and are hoping to stay together. They are all quite troubled and wonder if they’ll be homeless.”

A proposed $15 million cut to the state’s mental health system means there may be less money available to provide case management and support services for people who live on their own in the community, noted Centybear. Keeping residents in a group home is more cost effective for HowardCenter.

McDermott told Seven Days that the diocese initially tried to help HowardCenter find a new home on property owned by the St. Mark’s Parish in Burlington’s New North End. That effort failed when neighbors and parishioners complained, and the diocese has not offered any other alternate locales.

As to whether HowardCenter can meet the new deadline of May 31, Centybear isn’t sure. But he said he’s committed to finding a new home quickly and is in active talks with the owners of other properties in the Burlington area — properties that might not be available until the end of summer, at the earliest.

“We’re not going to be squatters and put our reputation as a community agency in jeopardy,” he said. “Nor are we going to break the law. But at the same time, these residents at Lakeview don’t have a voice, and we’re not going to just make them homeless.”